I remember when I first met Dondino. It was at the Frontier Hotel, on the Las Vegas Strip. He was performing in the classic lounge where many of the top performers in the late ‘70s and early ‘80s were firmly ensconced. It was 1982, and I was working for Robert Goulet at the Dunes Hotel as his publicist. I was also writing feature articles for Las Vegas Style Magazine (one of the best magazines covering Southern Nevada at the time), and writing a weekly entertainment column, “It’s the Norm.” It was the week I first met a dear, lovely showgirl/dancer who (she has remained a friend ever since) was in the revue at the, now gone, Aladdin Hotel. The lounge and Dondino was our meeting place after both of our shows (in those days I could stay up late).

For some stupid reason, acts like Freddie Bell, Sam Butera, and Dondino were forced to look for a new home in December, 1982, when management decided to close the Frontier lounge. Bell went to the Sands, Butera landed at the Tropicana, and Dondino headed downtown to the Four Queens.

Dondino first came to Las Vegas in 1980, and worked at the now defunct Royal American Casino, the Silverbird, and the Frontier, before he landed a temporary gig at the Four Queens Hotel & Casino, downtown,  which worked out real good for him. He kept getting extension after extension that went on for 12-years. Dondino’s lavishly-produced, six weekly performances, attracted thousands of new people to the downtown area, eventually building him a fantastic (at the time) worldwide fan club.  After 13 years in Vegas, Dondino decided to grab on to an opportunity few entertainers are offered–he opened his own theater in the then-booming mecca of Branson, MO. Dondino performed daily, making new friends from every corner of the world.

Now, after an absence of  a little over a decade, the man who makes tuxes look good, is back in Las Vegas, and will once again be making our town his home.  In honor of his return, the Italian American Club (IAC), 2333 E. Sahara Blvd., will hold a fundraiser, entitled “Welcome Home Dondino,” at 8 p.m., Sunday, Aug. 11.

A lot of Dondino’s success has been enhanced by involvement in humanitarian and civic efforts, including giving his performing time and talent. Now he is once again giving of his talent to an IAC fundraiser for its president, Angelo Cassaro. All proceeds from  the evening of great music, as only the man in the tux can bestow on his audience, will benefit the IAC, and its many charitable and civic efforts, including scholarships for worthy students. In addition to Dondino’s show, several dignitaries and celebrities will honor him with a “Welcome Home” segment.

The club has received a beautiful facelift, with new decor and ambiance.  This writer can verify that it has been really fixed up, and is a lot like it used to be when it was the place to be if you wanted great food, and enjoyable entertainment. One never knew who would be stopping by in the old days. And, it appears, those days are back again. The other evening, as an example, not only was Dondino there, but another terrific entertainer, Rob Garrett (the best Neil Diamond impressionist in the world), and the lovely (new to Las Vegas) Rosanna Telford, got up and entertained impromptu.  All in all, the New Italian American Club is back and, once again, is providing an evening of great music, excitement, and fun for both members and non-members.

As an example, this Thursday, the Club will serve up an extra side of ‘sauce’ as sexy Costa Rican songstress, the above mention Rosanna Telford, “knocks it out of the park,” for her third consecutive week. Rosanna performs a variety of music as only she can. The night will continue, as the IAC hosts a special ‘Farewell’ party for local entertainer, favorite/singer extraordinaire, and a personal friend, Mark Giovi, at 11:00 p.m. (Mark and family are relocating back to New Jersey). Telford will be performing early in the lounge, prior to the special party. This writer will be there early to have dinner with Garrett, and hopefully, I’ll get to say farewell to Giovi before the party. These days 11:00 p.m. is really late for me, LOL. There will be many entertainers stopping by for the party, and the public is invited to join in this special “send-off” to a great guy and amazing talent!

The Italian American Club, established in 1961, is a non-profit 501C7 organization, whose purpose in part is to exercise, promote, and protect the privileges and interests of its members and residents of the community, state, and country, as well as, to foster interest in the social, charitable, and civic welfare of its members and community. The IAC, over the past 53 years, has donated to Children with Cancer, Shade Tree, Youth Camp of Clark County, Paiute Indians of Moapa, and Catholic Charities, along with many other charitable organizations.

The Martelli Brothers and Casey Folks of Best in the Desert announced today, that The Mint 400 will be returning to Las Vegas in 2014. “The Great American Off-Road Race” will be held Saturday, March 15th, with pre-race festivities beginning earlier that week. The U.S. Fish and Wildlife Service and Bureau of Land Management have determined that March 15th is the new cutoff date for off-road racing in the Southern Nevada desert region, due to the potential impact on the Mohave Desert Tortoise. Both Best in the Desert and The Mint 400 are environmentally conscious organizations and rely on the support from multiple federal and state agencies to hold the annual historic race. “The biological assessment that was just conducted, lists the Mohave Desert Tortoise as an endangered species in the area where we race,” said Mint 400 CEO Matt Martelli. “We’ve been told to move our event back by a week to help ensure the safety of these animals, and we’re happy to do so. The off-road community is committed to preserving and managing our wildlife areas, so that future generations can continue to race in the desert.  The BLM has gone to great lengths to help us conduct The Mint 400 race each year, and we appreciate their support.” 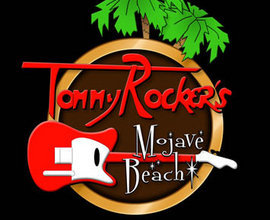 I stopped by the Tommy Rocker’s Mojave Beach Bar & Grill, 4275 Dean Martin Drive, to watch and listen to a singer (new to me, but well known in the clubs around town), Bud Mickle. It was also the first time I had been inside this particular bar, and both were pleasant surprises. Tommy was there, along with his friend (and mine) publicist, Bruce Merrin. I got to tell ya, Rocker is cool, and very down to earth. When it came time for the entertainment, Tommy casually walked to the stage, and said a few words about the guy we were all there to see and listen to, ending the intro with, “Bud is one of the most talented and passionate singer/songwriters to have ever played our Tommy Rockers

venues.  He’s truly a Las Vegas treasure. Take a listen, I think you’ll enjoy my buddy.” Mickle, dressed casually in Levis, sang with a deep soulful voice, as he played his guitar. “My Cross to Bear,” is his new CD, which follows his earlier CD, “Soulful Reunion.” Bud sings only his material in both CDs. Two of his new songs are really good listening, “This Side of the Dirt” and “Bella Savannah.”  And, as most readers know, I love the dirt (being an off-road racer for nearly 20 years). Mickle, incidentally, is a native Las Vegan, attended UNLV, and, when not at Tommy Rocker’s, can be found playing and singing at the Pioneer Saloon.  I guarantee you’ll enjoy this guy a lot!