Well, gang, the long awaited official Grand Opening of the Cosmopolitan Hotel/Casino on the Las Vegas Strip, took place on New Year’s Eve. And from what I’ve been able to find out, it was quite a blast. First off the bat were the stars that turned out to walk the red carpet, and then hang out at the various restaurants and attend the many events taking place. 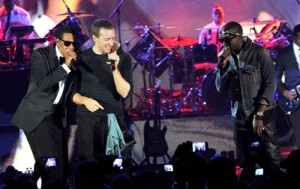 Headliners, Jay-Z and Coldplay, played an intimate concert filled with a number of surprises for the VIP invited guests, kicking off the star-studded celebration. Coldplay started the evening with a long set, which included “Yellow,” “In My Place” and “Clocks.” Jay-Z joined the group to perform a rendition of “Lost,” and stayed on stage to help in the countdown to midnight.

Then, after all the noise, screaming, kissing and hugging, Jay-Z took over the stage. He was almost immediately joined by Kanye West for an impromptu freestyle performance of “Run This Town,” “Can’t Tell Me Nothing” and “Runaway.” John Mayer was next to surprise the VIP audience, when he came on stage with his guitar and played along with the star of the evening. The ultimate surprise (but thought about I’m sure) came when Beyonce joined her husband, Jay-Z, on stage for “Young Forever.” Beyonce continued to wow the crowd, bringing Coldplay frontman Chris Martin back out for an acoustic duet of her hit “Halo.”

Here is a list of just a few of the special guests that kept the buzz going all weekend: Gwyneth Paltrow, Alex Rodriguez and Cameron Diaz, Jennifer Lopez and Marc Anthony, Rihanna, Mark Wahlberg, Jeremy Piven, Kirsten Dunst, Sugar Ray Leonard, and Forest and Keisha Whitaker to name a few of the more than 50 beautiful people in attendance.

We, Nancy Barr and I, took up a position at the end of the bar at McCormick & Schmick’s on Flamingo, where we joined up with our gang, consisting of Mel Carter, Jackie Brett and Barry and Louise Berlin, to toast 2010 out of our memory. Our little gathering started at around 6 p.m. and lasted until about 8:30, then it was head for the hills (home). Gary Waddell of Channel 8 News, and his wife, Chrisse, joined us for a quick dinner, before they left to help bring in the New Year from his anchor spot at the Cosmopolitan. Oh, I forgot the best part, the Happy Hour Menu for Friday consisted of special, “Prime Rib Sliders” for a buck apiece. We ordered six and were they delicious.

Tonight (Friday, Jan. 7) will see the return of the 12th. Annual Canon U.S.A. Red Carpet Event in the Bellagio Hotel Grand Ballroom, in conjunction with The National Center for Missing & Exploited Children (NCMEC), with special guest, John Walsh, of “America’s Most Wanted” and co-founder of NCMEC, along with about 20 other celebrities.

Since 1988, Canon U.S.A. and NCMEC have collaborated to educate the public about the growing issue of child abduction. The “Canon4Kids” program is a partnership the two have, that donates product to help law enforcement disseminate photos and information about missing children, produces Public Service Announcements with missing childrens photos, and informs parents about the importance of keeping those photos updated. To date, 691 children featured in the program have been recovered.

Among the local celebrities attending the gala are: Rich Little, Mary Wilson, Terry Fator, Greg London, Thunder From Down Under, Steve Rossi, The Ink Spots, The Platters and my good friend, Rob Garrett (entertaining as Neil Diamond), who will be doing his full show at the Cannery on Jan. 22nd.

THIS AND THAT QUICKLY:
The world famous Ink Spots (a tribute group consisting of Fareed Braxton, Flery Bursey, Eddie “Coco” Stancil and leader Lou Ragland), will be premiering their new show, “If I Didn’t Care,” this Saturday, at 4 p.m. in the Ray Wolf Theater at the Clarion Hotel & Casino (formerly the Greek Isles), 305 Convention Center Drive. The original Ink Spots quartet included Orville “Hoppy” Jones, Ivory “Deek” Watson, Jerry Daniels and Charlie Fuqua, and their 1939 recording of the song sold more than 19 million copies, making it one of the biggest-selling singles of all time.

The General Tire Mint 400 television show, with yours truly and Mel Larson being interviewed, will hit the tube on Feb.16th at 8:30 p.m. on Fuel TV. It will run several times, according to producer, Matt Martelli. For information about Fuel TV, go to www.fuel.tv.com.  We, Larson and I, had the opportunity to get an advance view of the film, and it’s a good one folks.

The Scintas will be returning to the Suncoast Hotel/ Casino showroom Feb. 11, 12 and 13th, just in time for my Valentines Day birthday,.  The family group is well known in Las Vegas and around the nation, as they continue to travel to all points of the globe, bringing their very unique talents to their fans. The Scintas consist of brothers Frankie and Joey, sister Chrissi and adopted brother, Peter O’Donnell. Show times will be 7:30 p.m. all three evenings. Tickets start at $29.95 plus tax and fees.