The signature Downtown Summerlin® Lunar New Year parade returns on Sunday, Jan. 22. Festivities start at 5 p.m. with the signature parade at 5:30 p.m. complete with fan dancers, stilt walkers, an oversized-dragon and more. The parade, in partnership with BEST Agency and Guan Strong Lion Arts Association, takes place on Park Centre Drive. The festivities are complimentary and open to the public.

On Sunday, Jan. 22, receive a complimentary lighted cheer stick – while supplies last – before the parade with your Experience Pass courtesy of the Summerlin app from 3:30 p.m. to 4:30 p.m. at the redemption table located in the breezeway of the ONE Summerlin office tower.

January 23 through January 27, the property celebrates The Year of the Rabbit with festive décor throughout the common areas. Highlights include picture perfect oversized 2023 letters at the Macy’s Promenade, a larger-than-life Chinese dragon at the Dining Arroyo, and an instant-worthy photo wall filled with festive décor located at the hallway near H&M.

Downtown Summerlin will also host a red envelope giveaway through the Summerlin app January 23-27. Guests have an opportunity to receive a complimentary red envelope filled with chocolate coins and surprise gift cards while supplies last. Redemptions take place at Concierge, located under the Breezeway of ONE Summerlin.

According to Halee Harczynski, senior marketing director, Downtown Summerlin, “This is our sixth-year hosting Lunar New Year at the property and honoring Southern Nevada’s rich Asian heritage with our annual Lunar New Year parade. It’s a celebrated community tradition and we can’t wait to unveil what we’ve been working on.”

For additional information, please visit www.summerlin.com or call Concierge at 702-832-1055.

BattleBots, the world’s premier robot combat competition, provides the theme for the first official BattleBots casino slot games, which are installed at Silverton Casino Hotel. Developed by Konami Gaming, Inc., a global leader in casino gaming, the industry’s first BattleBots slot machine debuts as Las Vegas gears up for the opening of the new hit live Las Vegas show: “BATTLEBOTS: DESTRUCT-A-THON,” which will open at the BattleBox arena on Feb. 3. Also, on view alongside the gaming machine are several real BattleBots robots, including Tombstone, Skorpios, Jackpot and Ginsu.

Slot-playing, robot-fighting fans can be part of the carnage as the iconic combat robots strike, swing, shove, slice and smash with each spin for cash bonuses and more. The slot game features BattleBots’ most memorable robot competitors such as Tombstone, Witch Doctor, HyperShock and others.

The phenomenally popular BattleBots television show has amassed a passionate audience in 150 countries, with more than 10 million followers on social media. 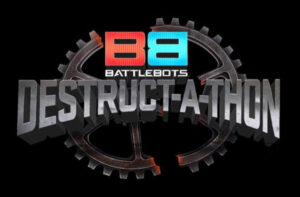 BATTLEBOTS: DESTRUCT-A-THON will be the world’s first robotic combat show and will be exclusive to Las Vegas. Shows take place on Thursdays and Fridays at 6 p.m., Saturdays at 3 and 6 p.m. and Sundays at 12 p.m. BATTLEBOTS: DESTRUCT-A-THON tickets are available now starting at $59 per person. In addition, the new BattleBots season premieres on Discovery Channel on Jan. 5.

BattleBots is the world leader in the fast-growing sport of robot fighting. For more than 20 years, BattleBots has brought its unique mix of metal mayhem, flames, explosions, and high drama to its passionate fans around the world. Created by Edward (Trey) Roski and Greg Munson and now seen in over 150 countries, the sport has over 10 million followers on social media, as well as tens of millions of television viewers. For more information, go to www.battlebots.com, or follow on Facebook, Instagram, Twitter.

Jimmy Kimmel’s Comedy Club, Las Vegas’ ultimate destination for late-night shows, surprise comedians, high-end casual cuisine, and memorabilia in the heart of The LINQ Promenade, invites guests to celebrate National Beer Can Appreciation Day on Tuesday, Jan. 24. The occasion marks the anniversary of the very first day beer was sold in cans: Jan. 24, 1935. Since the date coincides with “Trailer Park Tuesday,” resident comedic headliner Vicki Barbolak’s set, the club will offer happy hour prices on canned beer from 5 p.m. to 12 a.m., so guests can celebrate all night long.  Barbolak, a top 10 finalist on season 13 of “America’s Got Talent,” performs “Trailer Park Tuesday” at the club every Tuesday in January at 7:30 p.m.

Renowned for her sensational “trailer park nasty” comedy routine, Barbolak’s performance will draw from her roller-coaster life of working in a family carpet business owned by her dad, dueling with ex-husbands who think alimony is an Italian ice-cream flavor and raising two great kids all while living in the ultra-posh Vista Manor Trailer Park near San Diego.

On National Beer Can Appreciation Day, select canned beer will be available for $6 all night. The regular happy hour, available from 5 to 7 p.m. daily, includes $5 well shots of Tito’s Handmade Vodka, Jim Beam Bourbon Whiskey and El Jimador Blanco Tequila. For $6, guests can enjoy select beer, wine, and cocktails and, for $7 each, bites such as two mini hot dogs, chips and queso cheese, seasoned fries, pretzel bites and a three-cookie plate.

Jimmy Kimmel’s Comedy Club is located at The LINQ Promenade at 3535 S Las Vegas Blvd, Suite No. 16, Las Vegas, NV 89109. Tickets to Barbolak’s performance are currently available at jimmykimmelscomedyclub.com. Guests must be 18 years or older to enter and 21 years or older to consume alcohol.

Curated and designed by comedian, writer, producer and Emmy Award-winning TV host, Jimmy Kimmel’s Comedy Club at The LINQ Promenade captures the spirit of Kimmel’s hometown of Vegas. The Comedy Club features late night shows, surprise guests, high-end casual cuisine, and memorabilia. Complete with an expandable showroom that seats up to 300 guests, the dual-level 8,000 square-foot venue provides an optimal setting for both the audience and performers alike. Voted Best Comedy Club in Las Vegas by the Best of Las Vegas awards, the club showcases comedians ranging from household names to up-and-coming talent curated by Jimmy Kimmel and his team. For more information or to book tickets, visit jimmykimmelscomedyclub.com or call (702) 777-2782.

Audiences will experience a record 31 thematic 60- to 90-minute program blocks with categories including Animation, Comedy, Documentary, Drama, Horror, International, Sci-Fi, Nevada, Music Videos, Love & Romance, and Underground. This year’s festival features films from a wide variety of countries like Iceland, China, Mexico, Brazil, Israel, Netherlands, France, Poland, and many more. As a bonus, the festival will repeat four of the most popular programs on Sunday and screen every single award-winning film in two special programs.

“We are beyond thrilled to once again present our excellent and diverse programming to live audiences who can share their love of short films together,” said Lee Lanier, Co-Founder and Director of Continuity. “We’re grateful to the public that made our virtual festival a success the last two years and are ecstatic to be back in person to showcase quality and unique short films in our 19th Annual Festival, continuing to run as one of our community’s favorite cultural events!”

Boulder City and its small-town charm will welcome visitors for the five days of festival fun. The short films will be enjoyed with state-of-the-art digital projection in the Elaine K. Smith Center located at 700 Wyoming St, Boulder City, NV, 89005.

In addition to the screenings and filmmakers Q&A during each category block, the Festival will feature a filmmaker Meet-n-Greet, Coffee with Filmmakers, Dam Mixer, and DSFF Sunday Brunch. The Sunday night in-person Awards Presentation will also be livestreamed so everyone can tune in to find out which films win the various audience-determined awards.

Tickets are $12 per film block or $150 for the full five-day pass; $45 day passes for Thursday and Sunday, and $50 day passes for Friday and Saturday are also available.. For the full schedule of selected films, please visit damshortfilm.org.

Dam Short Film Festival is supported, in part, by the Nevada Arts Council, a state agency, which receives support from the National Endowment for the Arts, a federal agency, and the state of Nevada. Funding to support this organization has been provided by Nevada Humanities through Congress and the National Endowment for the Humanities. Throughout its 19 years, Dam Short Film Festival has screened more than 2,500 films – giving local, state, national, and international filmmakers a platform to showcase their films, and audiences the access to these unique and original stories.

The Mob Museum, the National Museum of Organized Crime and Law Enforcement, and The Underground speakeasy and distillery announce two new flavors of house-distilled corn whiskey moonshine: The Goodfella’s Vanilla Moonshine and a limited-edition holiday Peppermint Moonshine. Distilled in a custom-made copper pot still, the new selections join the Museum’s other notable moonshine varieties, including its Signature Moonshine which was named the 2020 International Whiskey Competition’s Best New Moonshine, the spicy yet sweet Cinn-City Moonshine and the gingery citrus blend of the Ginger Jake Moonshine.

Moonshine gained popularity during Prohibition in the 1920s due to its high alcohol content and short distillation process, but the potent spirit is still beloved today. No longer an underworld staple, The Mob Museum celebrates the tried-and-true traditions of the past as authentically and safely as possible while adding its own take.

Vanilla extract was legal during Prohibition, but it could not be sold for beverage purposes and was deemed unfit for consumption on its own, whereas peppermint was regarded for medicinal qualities, thus available as a prescription alcoholic elixir. Speakeasy patrons in the 1920s were known for dropping mints into bootleg spirits to help mask the poor taste, but those days are of a bygone era as these new moonshine flavors are meant to be enjoyed.

Goodfella’s Vanilla (42-proof) starts with Signature Moonshine as a base and is infused with Madagascar vanilla beans and brown sugar, creating a sweet sip that is as smooth as a wise guy—but packs a rich punch.  Inspired by seasonal flavors, the limited-edition Peppermint Moonshine (100-proof) will cure anyone’s winter blues. An infusion of peppermint and Signature Moonshine, this flavorful refreshment is a treat for spirit enthusiasts seeking a way to stay warm this season. Sweet and flavorful on its own, the limited-edition ‘shine is also the perfect liquor for boozy hot chocolates and other winter inspired cocktails.

“The Museum is delighted to introduce these two new moonshine flavors,” said Ashley Miller, vice president of marketing, communications, and sales for The Mob Museum. “Destined to be crowd favorites, they are both ideal as the perfect ingredient for festive cocktails, and we can’t wait for our guests to enjoy these new varieties.”

Each flavor of moonshine is available in 750mL and 50mL sizes starting at $6.95. For those interested in bringing home a selection of moonshines, the Museum offers a Moonshine 3-pack with three 50mL, airline-friendly, mason jars of ‘shine. With the Signature Moonshine, buyers can customize their 3-pack with two additional varieties of their choosing. The Museum has also created two limited-edition Merry Moonshine holiday wreaths – one with a single 750 mL bottle and the other with three 50mL jars of either the holiday or classic moonshine varieties. Guests can browse the Museum’s selection of moonshine in person and online. For guests purchasing moonshine online, those orders must be picked up in person at The Underground inside the Museum and be 21 years or older.

Well, gang, it appears we made it OK into 2023. Now I’m looking forward to celebrating my 90th birthday in February.  See ya when I see ya.