Off-Broadway hit, “Christmas in Hell,” continues its Holiday run at Notoriety’s Renkus Heinz Theater in downtown Las Vegas – The irreverent musical for this year’s holiday season has been a major attraction for those visiting Las Vegas.

The 90-minute production features laughs, original songs, and a wild assortment of hilarious characters. The show’s highly unconventional plot line makes it a must see for locals and visitors tired of the same-old annual Christmas offerings and open to a different kind of holiday experience. Previously featured at sold-out shows at Off-Broadway’s renowned York Theatre in Midtown Manhattan, “Christmas in Hell” made its debut at Notoriety on November 17th and will continue into the new year with shows until January 1, 2023.

“I think Las Vegas is ready for a holiday show like this,” said Gary Apple, who wrote the book, music, and lyrics of the show. “The Off-Broadway production was terrific, but Las Vegas has a vibrancy like no other place on earth. So, I’ve adapted the material to tap into that uniquely wonderful energy. For the New York audience, I had to remove some of the most outrageous elements. But I’ve put them back in for this run. I think the Las Vegas crowd can handle it.”

“Christmas in Hell” takes place on Christmas Eve, where a young boy is mistakenly taken down to Hell. When he returns, not only has he missed Christmas, but he is devilishly changed. To set things right, his father embarks on an extraordinary adventure that eventually leads him down to Hell itself, where he makes a wager with Lucifer he can’t possibly win.

“Christmas in Hell” is a wild, audacious, and surprisingly touching musical comedy about the lengths we’ll go to for the ones we love. When it ran in New York, it appeared alongside seasonal favorites such as The Rockettes and The Nutcracker on multiple “Must-See Holiday Show” lists in publications such as TheaterMania, TDF, Newsday, and amNewYork. The play even earned a place in Time Out New York’s “Best Christmas Broadway Shows of 2018-2019.”

Looking for a little evil this holiday season? Then take a trip to downtown Vegas and experience “Christmas in Hell,” which is directed and choreographed by Broadway veteran Lorna Ventura. The twisted comedy is produced by Mostly Musicals, LLC and is currently in its seven-week Las Vegas run at Notoriety. For more information, visit http://www.ChristmasInHell.com. Showtimes are 7:00 p.m. Thursday through Sunday, with tickets priced at $55 and $65 plus tax and fees.

The Mob Museum, National Museum of Organized Crime and Law Enforcement, has  unveiled a new photography exhibit in partnership with the iconic El Cortez Hotel & Casino. The exhibit titled “From Gambling Town to Resort Destination: The Epic Rise of Las Vegas” will be located in the north-south hallway inside the El Cortez and will take viewers on a journey through time in Las Vegas.

The exhibit, curated by the award-winning and nationally recognized Mob Museum, depicts imagery of historic hotel properties, iconic Downtown Las Vegas locations and legendary figures such as the Rat Pack, Elvis, and others, including the El Cortez’s previous owner, mobster Bugsy Siegel and his associates. Each image will be paired with an informational plaque describing the historical context of the photograph. The images explore the history of Las Vegas, exemplifying the town’s growth from small gambling halls to the gaming mecca and world-class destination it is today. The exhibit is free to view and is open to adults 21 years of age and older.

“We are excited to work with the El Cortez on this project, which will provide the hotel-casino’s guests a fun and educational tour of Las Vegas’ rich history, and perhaps whet their appetites to learn more at The Mob Museum just steps away,” said Geoff Schumacher, The Mob Museum’s vice president of exhibits and programs. “The El Cortez is a natural partner for a project like this, considering the hotel-casino’s important role in the city’s history.”

“The El Cortez is proud of our deep-rooted history, including being the only casino listed on the National Register of Historic Places. To partner with The Mob Museum on this new photo exhibit further solidifies our dedication to honoring our roots and bringing to life Las Vegas’ rich history,” said Adam Wiesberg, general manager of El Cortez. “We’ve recently reinvested more than $28 million in renovations, from rooms to the casino floor, marrying the modern and vintage our guests look to experience. We look forward to welcoming visitors to the hallway and invite them to take a step back in time here at the El Cortez.”

The project coincides with the completed renovation of El Cortez Hotel & Casino’s original hotel rooms from 1941, dubbed the Original 47, and the launch of the “Mob Boss” hotel package, including two Museum admission tickets and a hotel stay in an Original 47 room. Guests can use the offer code “MBORG47” online when booking.

French writer Jean-Baptiste Alphonse Karr famously wrote “plus ca change, plus c’est la même chose”. Roughly translated to “The more things change, the more they stay the same”, the Frenchman’s words in 1849 have a lot of merit for Richard Childress Racing and Kyle Busch heading into their inaugural season together in 2023.

RCR introduced the stylized No. 8 that will adorn the two-time NASCAR Cup Series champion’s Chevrolets in 2023. The revamped stylized No. 8 was personally designed by Busch and his team with input from Richard Childress and RCR. Fans can prepare for the 2023 season by gearing up with newly-released merchandise, which is available now at https://store.rcrracing.com/ and kylebusch.com.

The revised number honors the past while embracing the future and the new era that Busch’s presence brings to the 54-year-old organization, essentially merging one of the NASCAR industry’s most storied teams with one of the sports’ most successful modern era drivers.

Although the driver and number will look much different beginning in 2023, much of RCR’s No. 8 program will look very much the same in true “the more things change, the more they stay the same” form. Key members of the team, including crew chief Randall Burnett and spotter Derek Kneeland, return to their roles with the organization. What’s more, the team’s sponsor lineup will be very similar to what RCR fans have recognized on track in years’ past.

Familiar brands such as Cheddar’s Scratch Kitchen, 3CHI, Alsco, Lenovo and BetMGM will return to the No. 8 team in 2023, comprising a multi-sponsor lineup of corporate partners who will continue to build on the business successes they have captured in prior seasons with RCR

“Our business relationships are paramount to our organization and we’re proud to confirm that our primary partners on the No. 8 team will be returning to RCR in 2023,” said Torrey Galida, president of RCR. “Their commitment to our organization is a testament to our team’s collaborative approach and the value it has delivered to so many great brands.”

Table 34, a beloved Las Vegas neighborhood restaurant since 2004 recently acquired by locally-owned Batch Hospitality, will offer an added bonus to gift cards this holiday season. When customers spend $250 or more on gift cards at the trendy farm-to-table restaurant, they will receive an additional 20% in gift cards, available on the website or in-person now through Saturday, Dec. 2 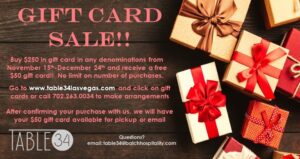 A reimagined design of the interior of Table 34 will give it a fresh feel while the familiar aroma of gourmet American comfort food fills the local favorite. Renovations will reveal a space awash in modern rustic charm with vibrant pop art adorning the walls in addition to an expanded bar, featuring white granite countertops. A refreshed menu built on the restaurant’s roots in farm-to-table cuisine including an impressive cocktail and wine menu featuring exceptional new libations and rare wines will keep guests coming back to try something new.

Since 2004, Table 34 has remained a beloved Las Vegas restaurant for lunch and dinner, serving gourmet American comfort food within a contemporary setting. Now under the direction of locally-owned Batch Hospitality, Table 34 will feature a reimagined look and menu, showcasing an exterior and interiors with modern rustic charm. In addition to its updated design, Table 34 will introduce a refreshed menu built on the restaurant’s roots in farm-to-table cuisine, plus a new wine list and contemporary bar program. A full reveal of the menu is set to be announced soon, promising an array of new dishes, wines and cocktails alongside signature Table 34 favorites. Table 34 will be open Monday to Friday from 11 a.m. to 2 p.m. for lunch and Tuesday to Saturday from 4:30-9 p.m. for dinner. More information is available on the website at www.Table34LasVegas.com, on Facebook and Instagram.

Batch Hospitality was founded by partners Evan Glusman and Constantin Alexander. Built on the foundation of genuine hospitality, the partners bring a breadth of hospitality experience from a variety of industry leadership roles. The result is a truly unique approach to modern-day restaurant operations and concept design. Batch Hospitality is passionate about crafting the ultimate dining experience for any occasion and takes pride in providing excellent service, amazing cuisine, and most importantly, memories to last a lifetime. More information is available on the website at www.BatchHospitality.com.

Well, gang, looking forward to another year on earth.

Meanwhile have a great Christmas and a Happy New Year!