The star of “Cinderella at the Palace,” a 2 1/2-hour CBS special created at Caesars Palace, Marlene Ricci, will be performing at the Italian American Club on Thursday, Oct 6 for an exclusive one-night performance.

The club is the perfect location for Ricci’s return to live performances, as that was one of the places her idol and benefactor used to visit when he was performing on the Las Vegas Strip.

Frank Sinatra discovered Ms. Ricci when she was performing in the mini showroom at the former Aladdin Hotel/Casino Las Vegas. Sinatra made it to the lounge while she was on her opening song. She watched “The Man” come in along with a few friends: Danny Thomas, Angie Dickenson, Pat Henry, and his right-hand-man Jilly Rizzo. Following her performance, Sinatra  asked her if she would like to be his opening act when his tour starts .Of course the answer was a resounding “Yes!”

Marlene, a native of Buffalo, New York, began her singing career at the age of six years, and made her way to Las Vegas, NV., via engagements in Reno and Lake Tahoe where Rizzo first saw her on stage. Jilly was so impressed that he made arrangements for her to sign a deal with the Aladdin and as they say in showbiz—the rest is history.

After much preparation, Marlene Ricci was officially the opening act for Sinatra. Her first show was the Sunrise Theater in Florida, followed by the Garden State Arts Center in New Jersey, where her family was in the audience. The tour continued to travel to San Carlos, Chicago Stadium, Nassau, Coliseum in Long Island, with the final stop back at Caesars Palace, where she became a television star.

Marlene went on to sign a multiple week contract at the “Top of the Dunes,” and became an opening act for such headliners as Flip Wilson, Don Rickles, Alan King, The Village People, George Burns, and Bob Hope to name a few of the stars. During a tour of Europe, she recorded an album that had a song titled “Tonight,” which made the charts.

Marlene was a featured guest star in “The Great Radio City Spectacular” at the Flamingo Hotel/Casino and returned to headline the final show on New Year’s Eve 2000. After three years of headlining in the “Le Bistro Theater at the Riviera Hotel/Casino, the singing sensation crisscrossed the country performing for many corporate clients, and private specials.

Marlene Ricci will be live in the showroom at the Italian American Club with the doors opening at 6:00 p.m. and the show scheduled to kick off at 7:30 p.m. For reservations call Janie at 702-457-3866 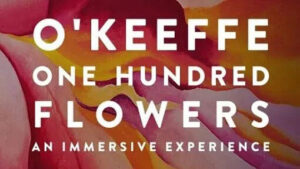 AREA15, the immersive art and entertainment district located minutes from the Las Vegas Strip, announces the launch of “O’Keeffe: One Hundred Flowers.” Featuring cutting-edge, 360-degree projection mapping technology, the exhibit is the most recent immersive art experience to launch at AREA15, following “Van Gogh: The Immersive Experience” and “Klimt: The Immersive Experience” which concluded in August.

On view throughout the rest of 2022, “O’Keeffe: One Hundred Flowers” celebrates the legacy of the greatest painter of flowers in the history of Western Art. Georgia O’Keeffe is the “Mother of American Modernism” and is celebrated as an icon for her crusade to create spaces for female Artists.

In this vividly immersive experience, O’Keeffe’s paintings come to life in a virtual garden revealing her most celebrated pieces – including a few which are not publicly displayed. Set to an anthemic 12-song soundtrack of notable all-female artists, including Nina Simone, Cyndi Lauper, and Andra Day, guests can experience the art as if looking through a magnifying glass.

Additionally, guests can order specialty cocktails inspired by the flora and fauna of the experience. Available for $19 each, libations include the Flower Drop made with Grey Goose Vodka, St. Germain Elderflower Liqueur, lemon juice and simple syrup, the Desert Flower crafted with Casamigos Blanco Tequila, agave, prickly pear syrup and lime juice and the Sky Above Clouds created with Grey Goose Vodka, Midori, lemon juice, lime juice and simple syrup.

As the experience concludes, each guest will also receive a package of wildflower seeds ideal for planting and celebrating the legacy of O’Keeffe.

“Following the enormous success of ‘Van Gogh’ and ‘Klimt,’ we are thrilled to launch AREA15’s newest immersive art experience inside The Portal,” said Winston Fisher, chief executive officer, AREA15. “As a top destination for immersive art and entertainment, AREA15 is a must-see attraction for art enthusiasts visiting Las Vegas.”

The timed digital art exhibition encompasses 35 minutes inside the 7,000-square-foot Portal. General admission tickets are available for $30 and discounted tickets for children, seniors, Nevada residents and military are available for $23. Various dates are now on sale through September; the show will run until February.

PT’s Taverns will host the return of the Guinness Perfect Pint Challenge for the ninth year. Local bartenders will compete to determine who has mastered the art of the perfect pour of the iconic stout. The ninth annual challenge will be held at PT’s Ranch, located at 2430 E. Pebble Road in Henderson, Nev., starting at 6 p.m. on Saturday, Sept. 24. During the challenge, fans will receive complimentary and discounted pints of Guinness as they cheer on their favorite contenders.

Guests are encouraged to show up early for complimentary pints of Guinness from 6 – 7 p.m. and $4 pints for the remainder of the event. In addition, guests will have the opportunity to get in on the fun at the mobile pint station where they can attempt to pour their own perfect pints from 7 – 10 p.m. Crowd participation is encouraged as guests are invited to join the excitement by competing for titles throughout the evening such as “Best Dressed” and “Best Spirit.”

Inspiring images from four internationally acclaimed artistic photographers will be on display at Michael Frey’s FAS44 gallery, offering a rare opportunity to experience the mystique and allure of Paris just off the Las Vegas Strip. Presented by Frey and Michael Hulett of The Hulett Collection, the “Fall into Paris” exhibition will highlight the masterful works of esteemed photographers Louis Stettner, René Grobli, Alain Laboile, and Kit Young.

The exhibition opens on Thursday, Sept. 29, and extends through Saturday, Nov. 19, 2022. “This show features stunning black-and-white photography that evokes all your memories and vivid emotions from the first time you visited Paris,” said Frey, an avid collector of fine art photography for more than 30 years. “These works allow you to smell the coffee and the croissants, marvel at the wide boulevards and the fashionable women in stylish skirts and Hermes scarves. They capture all the style and elegance of Paris, and you’ll be able to enjoy it right here in Las Vegas. I like to refer to it as ‘Fall into Paris … and fall in love.’ ”

The city of Las Vegas is sponsoring free outdoor concerts this fall, featuring a variety of music and entertainers. The public is invited to enjoy these afternoon/evening performances Sept. 7-Nov. 12. Bring low-back chairs or blankets to be more comfortable Refreshments will be available for purchase. For more information, visit www.ArtsLasVegas.org or call 702-229-ARTS (2787). Concert in the Park — Ami Divine Saturday, Sept. 17, 2-4 p.m. Free and open to the public. Historic Westside Legacy Park, 1600 Mount Mariah Drive.

Sultry songstress Ami Divine blends elements of R&B, poetry, and jazz to create a sound that’s uniquely her own — “The Divine Sound,” as she calls it. An Arizona native, she has been living in Las Vegas for the past decade, performing at various venues throughout the City. Her debut album, aptly titled “Spells,” was made after her mother passed away in 2020. She uses her music to uplift, even as she copes with loss. The album is dedicated to her parents.” Hear a sample at youtube.com/watch?v=e1rSppLKhOQ and youtube.com/channel/UCEsEflH2XC1XyDrlS6EiLZQ. The Historic Westside Legacy Park is a partnership involving the city of Las Vegas and Clark County.

Concert in the Park — Ruby Lewis presents Starlet Saturday, Sept. 24, 7-8:30 p.m. Free and open to the public. Pioneer Park, 7449 Braswell Drive. Journey back to the Golden Age of Hollywood and hear cinema’s most beloved leading ladies in this one-woman show written and performed by Broadway leading lady Ruby Lewis. Known for her work as Marilyn Monroe in “Marilyn!” at The Paris Las Vegas (2018 Best Broadway Performer Las Vegas), and as Daisy in the critically acclaimed show “Baz,” Lewis’ soaring vocals make the show. In this “star-studded” performance, she takes on Monroe, Garland, Dietrich, Gardner, and Hepburn, just to name a few. Hear a sample at https://www.rubylewis.com/starlet.

Well gang, that’s about it for now.