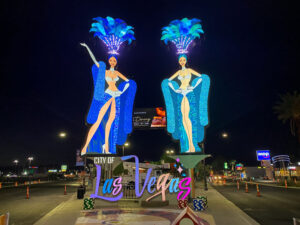 YESCO, the 102-year-old company known for creating, repairing, and maintaining internationally recognizable signs, and the City of Las Vegas announce the installation and official lighting of two brand-new, 50-foot-tall showgirls on the corner of Main Street and Las Vegas Boulevard. These new showgirl signs are double the height of the prior showgirl icons installed in 2018, which each stood 25-feet tall. The showgirls will light up for the first time this evening at dusk.

The retro-style showgirls will create a lasting legacy for the city as they join the previously installed dice sculptures and sidewalk roulette table to welcome visitors to downtown Las Vegas.

“With an extensive history of fabricating, installing and maintaining Las Vegas’ most internationally recognizable signs, YESCO is thrilled to complete the newest iconic project for the city,” said Jeff Young, executive vice president of YESCO. “These historic signs will welcome visitors to downtown Las Vegas for decades, and we’re proud to have partnered with the city of Las Vegas to bring them to life.”

“Over the decades, YESCO has created some of the most notable signs in Las Vegas, with other recent examples including Downtown’s Gateway Arches and signage at the Circa Resort & Casino,” said city of Las Vegas Mayor Carolyn G. Goodman. “These gorgeous signs will continue to elevate Las Vegas’ image as a world-class travel destination beloved by people around the globe.” 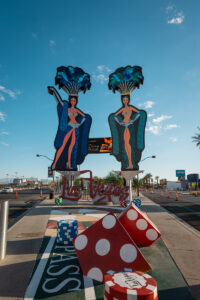 The previously installed, 25-foot-tall showgirl signs are currently undergoing refurbishment due to weather damage. They are scheduled to be installed in the Las Vegas Arts District this fall on the corner of Fourth Street and Las Vegas Boulevard, in front of the Las Vegas Deuce double decker bus stop.

FUN FACTS/ NEW SHOWGIRLS: Height: Each showgirl is 50-feet tall by 15-feet wide; Weight: Each showgirl weighs 6,800 pounds; The showgirls are internally illuminated with white LED, and the headdresses are lit with exposed full-color LED pucks designed to scintillate or twinkle. Each headdress is more than 5-feet tall and 6-feet wide. They were fabricated separately and were the last elements to be installed after the showgirls’ graphic panels were installed.

ABOUT YESCO: YESCO specializes in the manufacture of custom electric signs, sign maintenance and out-of-home advertising. In addition, YESCO operates sign and lighting service repair stores throughout North America as well as a sign financing business. Thomas Young founded the company in Ogden, Utah, in 1920 after borrowing $300 from his father. YESCO began by offering wall painted advertisements, gold-leaf window lettering and coffin plates. Today, helmed by the second, third and fourth generations of the founder’s family, YESCO creates, services, and maintains award-winning displays for some of the most prestigious brands. For more information, go to www.YESCO.com.

The city of Las Vegas is sponsoring seven free outdoor concerts this fall, featuring a variety of music and entertainers. The public is invited to enjoy these afternoon/evening performances Sept. 7-Nov. 12. Bring low-back chairs or blankets to be more comfortable. Refreshments will be available for purchase. For more information, visit www.ArtsLasVegas.org or call 702-229-ARTS (2787).

Concert in the Park — Paris Chansons, Wednesday, Sept. 7, 6-8 p.m. Bruce Trent Park, 8851 Vegas Drive. Three multilingual singers — Julia Kantor, Jacob Kantor, and Max Cohen — bring harmony and diversity to their shows. Julia, originally from Ukraine, lived and studied in France where she discovered a soul connection in French music that still imbues every performance. Together with her husband Jacob, a Russian-born singer/songwriter, they launched Paris Chansons. Cohen grew up in Morocco steeped in French music, particularly the songs of Enrico Macias. His rich velvety voice delivers beautifully nuanced renditions of his favorites, complete with a signature North African lilt. Superb musicianship anchors the ensemble, effortlessly moving from jazzy improvisation to slow-burning balladry to blistering gypsy fervor. All seasoned pros, the musicians are Jeff Lams on piano, Adam Cohen on upright bass, Endre Balogh on violin, Sinclair Lott on drums and Jacob Kantor on guitar. Paris Chansons takes you through a spectacular celebration of French and international music. Get a taste of Paris Chansons at https://youtu.be/t252MrD7vbo and https://youtu.be/faOSlxTjw1o.

Concert in the Park — Ami Divine, Saturday, Sept. 17, 2-4 p.m. Historic Westside Legacy Park, 1600 Mount Mariah Drive: Sultry songstress Ami Divine blends elements of R&B, poetry, and jazz to create a sound that’s uniquely her own — “The Divine Sound,” as she calls it. An Arizona native, she has been living in Las Vegas for the past decade, performing at various venues throughout the City. Her debut album, aptly titled “Spells,” was made after her mother passed away in 2020. She uses her music to uplift, even as she copes with loss. The album is dedicated to her parents.” Hear a sample at youtube.com/watch?v=e1rSppLKhOQ and The Historic Westside Legacy Park is a partnership involving the city of Las Vegas and Clark County.

Concert in the Park — Ruby Lewis presents Starlet,  Sept. 24, 7-8:30 p.m., Pioneer Park, 7449 Braswell Drive: Journey back to the Golden Age of Hollywood and hear cinema’s most beloved leading ladies in this one-woman show written and performed by Broadway leading lady Ruby Lewis. Known for her work as Marilyn Monroe in “Marilyn!” at The Paris Las Vegas (2018 Best Broadway Performer Las Vegas), and as Daisy in the critically acclaimed show “Baz,” Lewis’ soaring vocals make the show. In this “star-studded” performance, she takes on Monroe, Garland, Dietrich, Gardner, and Hepburn, just to name a few. Hear a sample at https://www.rubylewis.com/starlet.

Following final approval by the Nevada Gaming Commission, FanDuel Group and Boyd Gaming (NYSE:BYD) today announced plans to open a FanDuel Sportsbook at the Fremont Hotel & Casino in Las Vegas early next year – the first FanDuel-branded Sportsbook in the state of Nevada. FanDuel Group’s subsidiary, Betfair Interactive US LLC, received approval from the Nevada Gaming Commission for an operator of information service license and a manufacturer/distributor license. Betfair Interactive also received a recommendation of approval from the Nevada Gaming Control Board on August 10. 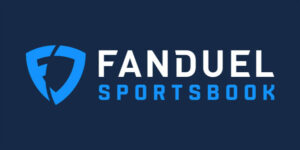 The FanDuel Sportsbook at Fremont Casino will be conveniently located off the Third Street entrance, near the Filament Bar. Stretching over 2,300 square feet, the sportsbook will serve as a one-stop-shop for fans to enjoy sporting events while placing wagers on the action. The sportsbook will be open year-round and feature four betting windows, two LED video walls (16’x9’), a 40-foot bar, 16 tables, two drink rails, seating for 76 customers, 14 odds/promo screens and seven IGT PlaySports self-service betting kiosks.

The FanDuel Sportsbook at Fremont Casino will be part of Boyd’s ongoing $50 million expansion of the Fremont, which will significantly enhance the property’s gaming and dining amenities upon its completion early next year. FanDuel has entered into a co-branding arrangement with Boyd Gaming for the sportsbook and will provide lines/odds information for Boyd Gaming to use in setting the lines/odds at the sportsbook. In accordance with Nevada law and regulations, Boyd Gaming will hold the sportsbook license and will operate and manage the FanDuel Sportsbook at Fremont. FanDuel and Boyd Gaming will share gaming revenue as part of the arrangement.
With the opening of the Fremont sportsbook, the Boyd-FanDuel partnership will expand to eight states, joining FanDuel Sportsbooks at Boyd properties in Illinois, Indiana, Iowa, Kansas, Louisiana, Mississippi, and Pennsylvania.

“I am honored to have the opportunity to lead this extraordinary institution charged with preserving the history of the Nevada Test Site and the atomic age both nationally and internationally,” said McCoy. “As a native, I am passionate about sharing this remarkable history unique to Southern Nevada.”

“Rob McCoy is an experienced leader with a passion for Las Vegas history and the National Atomic Testing Museum,” said Darwin Morgan, president of the Nevada Test Site Historical Foundation and NATM’s board of trustees. “Having brought international prominence to The Neon Museum and tripling visitor attendance during his tenure, Rob is uniquely equipped to lead the Atomic Museum to reach even larger numbers of science, technology, engineering, math, history and culture enthusiasts both locally and around the globe.”

McCoy began his career as a television news reporter and anchor. He joined the corporate world in 1983 and in the intervening years has provided valuable expertise to several companies in the areas of public, media, and government relations as well as crisis communications and marketing. McCoy comes to the National Atomic Testing Museum following five years as The Neon Museum’s chief executive officer.

As a native Las Vegan, issues concerning quality of life and sustainability drive McCoy’s community commitments, both professionally and personally. McCoy formerly chaired The Neon Museum’s Board of Trustees and Vegas PBS. He is also the incoming president of the Las Vegas Golf Hall of Fame and has also served as a board member for The Boys & Girls Clubs of Southern Nevada, Metro Chamber of Commerce, and the Nevada Taxpayers Association.

McCoy holds both a Bachelor and Master of Science in communications from LaSalle University and is also a graduate of the Martin School of Radio & Television Arts and Sciences. Additionally, he retains professional certifications from Harvard University, Massachusetts Institute of Technology and Cornell University.

With more pickleball courts than any Las Vegas hotel/casino, the Plaza Hotel & Casino is again the official hotel and title sponsor of the Las Vegas Pickleball Open, set for Sept. 21-25. The tournament will again offer professional players a competitive prize package of $60,000 split between grand prize, silver, and bronze medalists.

Tournament directors expect more than 400 players, both professionals and amateurs, to play in this year’s event on the Plaza’s newly resurfaced tournament level courts. The event will offer men’s, women’s, and mixed amateur doubles matches as well as men’s, women’s, mixed and senior (50-plus) professional doubles matches. Spectators are welcome to watch any of the matches for free.

“The Plaza has built a reputation as a premier pickleball destination. As a result, the Las Vegas Pickleball Open has welcomed hundreds of players from across the globe over the years, and it is very exciting that the event is celebrating its fifth anniversary on our rooftop courts.” said Jonathan Jossel, CEO of the Plaza Hotel & Casino.

A cross between tennis, badminton, and ping pong, pickleball is the fastest growing racquet sport in the U.S., boasting more than three million players – a number that has been growing by more than 10 percent each year over the past decade.

Well, gang, that’s about it for this column.