The Make-A-Wish room will be the first exam room at Cure 4 The Kids  Foundation to feature a digital monitor, which will play a video showcasing the Make-A-Wish  process for wish-granting as well as a QR code that will direct families to the organization’s referral page. The room will help increase awareness for families of children receiving treatment at Cure 4 The Kids Foundation that their child may be eligible to receive a wish.

Make-A-Wish Southern Nevada has enjoyed a long-standing partnership with Cure 4 The Kids Foundation, which has historically made the most eligible medical referrals to the organization.

At a brief ceremony commemorating the Make-A-Wish room, wish kid Adison Tomasiello-Harvey, 15, a Cure 4 The Kids Foundation patient, will learn she and her family are headed for Disney World the next day. Diagnosed at a young age with Hypogammaglobulinemia, Adison does not produce enough antibodies to fight off illness, so she continually battles other conditions, including asthma and multiple allergies. The event took place yesterday in the main lobby of the Make-A-Wish room.

“The Docksiders are bringing a little ocean to the desert this September!” says Producer, Band Leader and Singer, Kevin Sucher. “We take our fans on a voyage back in time, creating a nostalgic experience with their favorite jams from the 70s and 80s. Launching the first Yacht Rock residency in Vegas is an honor, and we can’t wait to soft rock the boat at The Duomo!”

With a frequently updated assortment of top hits, fans can expect no two shows to be the same, with renditions of favorites like Olivia Newton-John, Toto, Kenny Loggins, Steely Dan, Michael McDonald, Hall & Oates, Christopher Cross, and Ambrosia. 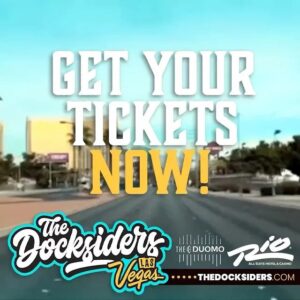 Introduced to The Docksiders by the iconic Tony Orlando who said, “The Docksiders belong on a Vegas Stage,” Costa commented that “Tony Orlando has been finding what’s next in entertainment from the time he was a teenager, and when he talks, guys like me listen. The Docksiders are not a tribute act – they are a soft rock band that pays tribute to the best music and musicians. They immerse guests in the experience as they play the greatest smooth rock hits. That’s exactly why we wanted them in Vegas’ newest venue, The Duomo.”

Sgro echoed this sentiment saying, “The Docksiders have their own look, their own sound, and are a fun time on stage. We can’t wait to have this energy at The Duomo.”

The Duomo made its debut at Rio in June 2022, combining culinary and entertainment experiences to create a uniquely sexy and sociable environment. The venue seats 300 and features a massive center bar, nostalgic arcade and an Italian casual dining restaurant, Cupola Cafeì.

With an extensive entertainment background, Sucher paved his way as a producer, artist manager, tour manager, and more – becoming a three-time Oscar winner and three-time Grammy nominee. The Docksiders launched in 2018 under Sucher Entertainment, jumping into major US tours and headlining festivals, building a consistent following of Yacht Rock fans who show up and sing their hearts out in each City. The entire band is uprooting from the Midwest to become official Las Vegas residents this summer, and they can’t wait to set sail to Sin City.

The Docksiders will perform five nights a week, dark Fridays, and Sundays. The doors open at 5:30 pm, with the show starting at 6:00 pm. Guests can choose from general admission and VIP ticket selections, with VIP packages including a meet and greet photo opportunity with the band. Tickets begin at $35.99, plus applicable taxes and fees. Tickets are available at www.thedocksiders.com.

Bridesmaids: The Unauthorized Movie Musical Parody, based on the 2011 hit sensation Bridesmaids, premiers this fall at The Venue inside The Orleans Hotel & Casino, bringing all the comedy, bad decisions, and female camaraderie to the Las Vegas stage. Tickets are on sale August 3 at Bridesmaidshit.com for special preview performances starting Friday, August 19, and the official world premiere on Thursday, September 22.

Presented by Theater Mogul Lynn Shore Entertainment and Ivory Star Productions, the female-driven musical follows a group of girlfriends and their chaotic shenanigans as they rival to be the brides’ best friend. Raunchy yet heartwarming, the 90-minute show will have guests laughing aloud from beginning   to end.

“I’ve always been attracted to movies and storylines about strong female characters, and I love that this musical parody is a love story to friendships,” said Show Writer Valerie Witherspoon. “We are thrilled to bring the world premiere of Bridesmaids: The Unauthorized Movie Musical Parody to the Las Vegas stage. It’s going to be perfect for date nights, bachelorette parties, and audiences of all kinds – no matter if they’re the film’s No.1 fan or haven’t seen it at all.”

Written by Witherspoon, directed and choreographed by Sarah Lowe, musically directed by Chris Lash, and performed by talents like Nicole Unger as Annie, Erin Baltsar as Helen, and Caitlin Ary as Megan – together these women bring the film’s favorite characters to life with side-splitting laughter and adult humor In person and on stage. Performed at the Strip-adjacent The Orleans Hotel & Casino, The Venue offers an intimate and accessible space with no bad seat in the house.

Bridesmaids is presented Fridays and Saturdays at 9:15pm, with doors opening at 8:45pm. Guests must be 18 years old or older. Tickets start at $46.83++; VIP tickets are $60.59++ and include priority seating; and Platinum VIP tickets are $79.85++ and include priority seating at a cocktail table, unlimited champagne or champagne spritzer, and a souvenir photo. For more information, visit www.bridesmaidshit.com, and follow @bridesmaidshit on TikTok and Facebook.

Founded in 1934 in Normal, Illinois, Steak ‘n Shake will serve its well-known and delectable Steakburgers, delicious milkshakes and fries. This includes mouthwatering classics such as the Western BBQ ‘n Bacon Steakburger and Frisco Melt to specialties like the Butter Double Steakburger. The milkshakes, made with real milk and fresh ingredients, are topped with whipped cream and a cherry. Flavors include everything from chocolate to banana, in addition to specialty shakes such as Oreo ® Cookie, Birthday Cake, Kit Kat ® and more.

The Mob Museum, the National Museum of Organized Crime and Law Enforcement, today announced it has purchased a 30,000-square-foot parcel of land directly to its east. Bordered to the south by Stewart Avenue and to the east/northeast by Fourth Street, the wedge-shaped parcel provides the Museum with additional space to build out much-needed facilities for administration, exhibitions, archives, educational, entertainment programs, and food and beverage facilities.

“The Museum has enjoyed enormous success throughout our 10 years of operation, averaging well over 1,000 visitors a day, and we have remained focused on delivering an incredible guest experience, meaningful exhibits and public programs consistent with our mission,” said Jonathan Ullman, president and chief executive officer, The Mob Museum. “An expansion would enable us to reach a much broader audience by increasing our offerings, community engagement opportunities and contribution to the growth of the public’s understanding of organized crime and law enforcement.”

With this purchase, the Museum has made the first step toward its next phase by expanding the footprint of its campus. The acquisition of the new parcel allows the Museum to have greater flexibility in constructing additional facilities, while respecting the integrity of the Museum’s historic building.

“Planning for the Museum’s expansion is still in its earliest stages,” added Ullman. “While extremely exciting to consider, our plans are entirely conceptual at this point. We look forward to announcing additional details in coming months.”

For more information about The Mob Museum, visit themobmuseum.org.