I hope you have had a chance to watch the documentary shown on CNN the last couple of weeks. It’s titled, “Blackfish,” and tells the story of an Orca whale that has lived most of his life in captivity. It was, and is, an amazing story running just under 90 minutes. It was first shown to the public at the annual, “Sundance Film Festival,” in January, 2013, and it immediately created a small thunder storm across the country. 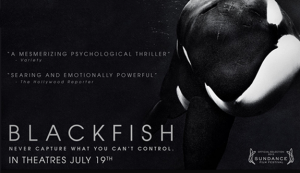 The featured Orca is named, Tilikum, a huge black and white male. The Orcas are a very popular exhibit at all of the “SeaWorld Zoos,” around the world. If it’s not named “SeaWorld,” and they have Orca’s, it is most likely they have a rental deal with the giant corporate zoo. The film, produced by Gabriela Cowperthwaite and Manual V. Oteyza, was distributed by Magnolia Films. CNN helped by providing production facilities for the film makers.

Unfortunately, it took a third killing by Tilikum, a 33 year old Orca, who was captured at the age of three, to get the story started, filmed, and shown to the general public. The third victim was a wonderfully experienced, attractive trainer, at SeaWorld, Orlando, Dawn Brancheau. The tragic death occurred during a normal performance by the Orca, during a “dinner show.”  The death, was not only tragic, but has created a tremendous amount of chatter against the SeaWorld monopoly.

On Feb. 24, 2010, Ms. Brancheau was doing her regular show stuff with Tilikum, when he suddenly (according to witnesses), and without notice, grabbed her arm and pulled her into the water, diving with her numerous times. It took all the trainers, and a lot of maneuvering, to get the whale into a small pen, where he finally released his trainer. But, by this time the trainer was dead. There’s been numerous other incidents involving Orca’s at various SeaWorld type zoos around the world. What makes this so very important, is the fact that this one blackfish has killed three humans, and is still alive. If it was any other animal it would’ve been put down a long time ago. But, see, this is a male super fish, that has created a lot of babies, and according to sources, they make a ton of money from his sperm (which is harvested by the trainers), which they sell. Oh, and they lease out the baby Orca’s to other zoos. And, of course, the admission tickets at the various Zoos, and the sale of “Shamu” like dolls, etc. In other words, gang, it is a, “money making machine! That’s the bottom line!”

I realize that the “Blackfish” film uses the term, “Killer Whales,” in the film an awful lot. I am only mentioning that reference once, and that is, in my opinion, not factual. Yes, in the wild they are known to be tremendous hunters and killers of seals, etc. But, and this is the point of the film, they have become known as “Killers” since they have been penned up at these benevolent (that’s a joke my friends) zoos. Bah, humbug! They should release them to the oceans, whence they come from. The least that could be done, is for all the young Orcas to be put back in the ocean, with a large area netted off for them. And, the babies should be released to the ocean, so they could become adopted by a family of Orca’s, not sold or leased out like a car. I don’t know very much about this film, having only watched it last week (twice). But I do love animals of all kind. I have been to the San Diego SeaWorld, and found it very interesting. They have a lot of interesting exhibits, including the Orcas who perform shows every single day of their existence. They have an intelligence believed to be far superior to ours.  Why else would Admiral James T. Kirk (William Shatner) come back to earth in the film, Star Trek “The Voyage Home,” to free a certain whale from its captors, and bring it back to the earth of the future?

I hope you take a few minutes out of your TV time to watch this excellent film. I’m not saying everything is absolutely factual. I’m not condoning what SeaWorld does in keeping them either. That’s for every one of us, the humans of this earth, to decide. By writing letters in “favor of,” or “against,” SeaWorld, will the officials who are supposed to govern these zoos, begin to listen to the public response, and just maybe, put a stop to allowing any more catching of Orcas, and forcing the release of the newborn babies to the oceans. That’s my last word on the subject!

The Comedy Community is coming together to help one of their own, with a group of special benefits being staged for Las Vegas comedian/Impressionist, Pam Matteson, who has been battling cancer for seven years. The cancer has returned and has now spread to her brain, hence the Laugh Factory at the Tropicana Hotel on the Las Vegas Strip, will be the first. Management of the club have agreed to stage a special night, in an effort to raise some badly needed money to help with her mounting medical bills, this Friday Nov. 1, with 100% of the revenue from the evening going into a special fund. The show will kick off at 8:30 p.m., with singing impressionist, Finis Henderson, headlining an all-star list of entertainers. There are several benefits, in various stages of planning, with one to be held at The Plaza, downtown, Nov. 24, and another one at the Hollywood Laugh Factory, with that date to be announced. Booked to perform with Henderson Friday are fellow comic impressionists, Shayma Tash, Harry Basil, and some special surprise guests! There is also a Go-Fund-It link to make direct donations. For further information contact Harry Basil at 818-621-8303, or go to the GO-FUND-IT link at http://www.gofundme.com/4v2oi0.

Bill Fayne is kicking off a weekly Wednesday night show at the Copa Room, a special banquet room operated by the Bootlegger Bistro, 7700 Las Vegas Blvd South, titled: “Bill Fayne & Friends Celebrate.” Each week Fayne will present a completely different show, with different friends, all revolving around musical theater and composers. Last week they did all Sondheim, and this Wednesday (Oct. 30) it will be, “The Book of Merman.” On Nov. 16, Fayne will present, “Broadway Classics,” starring Ron & Lisa Smith, George DeMott, and Zipporah Peddle. Other presentations include Nov. 13th “Broadway Opera,” with Ayler Evan, Amanda Kaiser, Tim Molyneaux and Gret Menzes. Future plans are for productions of, “Kander and Ebb,” “Redheads,” with Kelly Clinton and Tara Palsha, and “The American Songbook on Broadway,” featuring the music of, Gershwin, Berlin, Porter, Kern, etc. The Copa Room is a beautiful venue with good sound, lighting, and the best part is the price of admission. For a donation of $10, you not only see a great show, but with your entry you get a coupon for a free bottle of wine with your future meal at the “Bootlegger.” That means the show is virtually free. Showtime is at 7:00 p.m., followed by a Broadway open mic.

Mistinguett Productions presents a new show at Sun City Summerlin’s Starbright Theatre, 2215 Thomas Ryan Blvd., on Saturday, November 9th at 7:00 p.m., to celebrate Veterans Day. “Patriotic Rhythms,” is an 80-minute,  extravaganza of music, dance, and military precision that celebrates with heart-felt and rousing recognition, of all veterans and active military men and women. Opening the show will be 30 members of the award-winning Palo Verde (AFJROTC) Air Force Junior ROTC, armed and un-armed drill teams. Directed by Captain Glen Doughty, they will present the colors,  perform the folding of the flag ceremony, and an exhibition of both armed and unarmed routines. This inspiring opening performance will continue with a musical tribute to nine decades of American music made popular during war time. From the 1930’s and 40’s, the Andrew Sisters’ “Boogie Woogie Bugle Boy”, Bette Midler’s “Stuff Like That There”, and Christina Aguilera’s “Candy Man” as performed by singer/dancers Gabriella Versace, Dejah Padon, Lisa Kunz and Kimba Munford. Male cast members include, George DeMott, Grant Griffin, Dave Hoover, Enrique Lugo and Oslavy Lopez, who will sing, “There is Nothing Like A Dame.” Patriotic Rhythms will feature a special tribute to Red Skelton’s, “Pledge of Allegiance,” as originally recited on his 1950s TV show. Jeneane Marie will perform “Stand Strong”, a special dedication to the work of the Blue Star Mothers of Nevada whose mission is to support our troops and veterans. Several of Sun City’s own World War II veterans will be present to sing “This IsThe Army Mr. Jones.” A foot-stomping and rhythmic dance number choreographed by Lugo, and presented by the Mistinguett Showgirls guarantees to bring down the house. When you join the 40-member cast, to stand up and salute our veterans, you will also support the Blue Star Mothers of Nevada; a portion of all ticket sales will go to their efforts to support active military sons and daughters. Tickets are $16 for residents, $19 for non-residents.

Trey Noran presents the, “Impulse and Legends Concert,” on Thursday, November 7, at the LVH ( the former Las Vegas Hotel & Casino).  This charity event will raise funds for, “His Love Street,” serving homeless communities since 1989.  All of the monies raised will go toward opening and supporting a work placement agency and food pantry at 1200 Stewart in Las Vegas, Nevada.  Many Las Vegas entertainers will be performing at this special event including “Impulse” (Brooke Allyson and Jim Shank), Tierney Allen as Lady Gaga, Alex Sherpa as Cher and Travis Allen and Tyler James will both be performing as Elvis.  It promises to be an evening of live music, dancing and amazing performances for a great cause. “His Love Street,” and Trey Noran, have been seen on ABC, CBS, NBC and FOX.  The charity has also been featured in articles written in the Denver Post, the Las Vegas Review-Journal, and Las Vegas Sun newspapers. Tickets for the concert and for a VIP Booth Package (including tax and fees) can be purchased at the LVH box office, online at www.thelvh.com  or by calling 702-732-5755 or 800-222-5361.

I am outa here!