In the 55 years this reporter has lived in Las Vegas, I have had the privilege of meeting and getting to know various entertainers, ranging from Frank Sinatra and the rest of the Rat Pack gang, to Lola Falana, Robert Goulet,  Wayne Newton, and a whole bunch of stars in between.  I’ve worked for so many of them, as a publicist or in a consultant position, it would be unfair to name just a few.  But, I must mention one entertainer in particular.  That person is Bob Anderson, who in my opinion, and that of his peers, is one of the best entertainers that has ever performed on a Vegas stage. 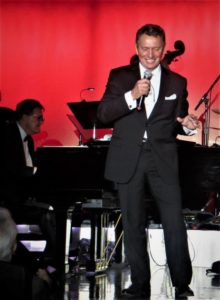 After 41 years in the lounges and main rooms of every Hotel Casino on the Strip, Anderson will be performing in one of the few real supper clubs left in town. The Italian American Club (IAC) on Sahara Avenue, for two nights; Dec 27 and 28th.

When I asked Bob, why he was working at the IAC while still being a headliner on the strip, he said, “I just want to work there. I love the people and I also love working in an intimate supper club and the IAC just happens to be one of the last… and, one of the best… in the country!

As a singer, Anderson rates with the very best.  As an impressionist, he stands alone.  His accolades are numerous. People Magazine named Bob Anderson, “America’s greatest Singing Impressionist” and  VH1 named Anderson “The best singing Impressionist in the world!”  Anderson has over 150 national and international television appearances under his belt, from Johnny Carson to David Letterman. Bob has the distinguished honor of being the only artist in the history of the Tonight Show,  with two appearances in the same week on the tonight show with Johnny Carson.

Bob Anderson wrote and starred in the award-winning show…FRANK The Man The Music, that ran for one year at the Palazzo Hotel and is now Broadway bound: Bob’s final goal as an entertainer!

The show at the IAC will be Bob being Bob.  His repertoire of course runs the gamut of music from “The Great American Song Book,” to some of the great new songs of today, and of course some of those songs made famous by two of his greatest impressions—Frank Sinatra and Tony Bennett. Toss in a fabulous Sammy Davis,Jr., and you eventually leave the showroom, knowing that you have just witnessed a fantastic entertainer doing nothing but pouring out his heart and soul for you his audience.

Should you like to compare him with any special entertainer from the past there is, in my opinion, only one that qualifies. And who would that be you ask? Well the entertainer had a career that spanned the years from 1920 when he began singing in a touring vaudeville show, was discovered by one of the Shubert Brothers who signed the singer to headline at the famous Winter Garden Theater on Broadway for the next 20 years. This singer would do the scripted performance, then with the curtain down, would go out and sing a few of his hits.  Audiences were never disappointed when he finally would say, “Well folks, that’s about it…”

This entertainer starred in the first “talkie movie,” the “Jazz Singer.” Now you probably are heading for your google search to discover who I’ve been talking about, right?  Search no more.

Al Jolson was during the 1920s through the ‘40s and into 1950 considered the greatest entertainer to ever work a stage! He reigned supreme over other entertainers of the time! That was not my words but the words of critics from Broadway to film and television. His records out-sold Sinatra and even Bing Crosby (who was huge then).

Now it’s Bob Anderson’s turn to be given that honor. And, believe me, he has earned it the hard way—by never giving up when it looked gloomy (and there were times when things were not going his way), but he never gave up.

Anderson has a God given talent and how do I dare compare him with Jolson. Let me tell you about an incident that happened this year. Bob was appearing in the showroom at the South Point Hotel one weekend. Show was scheduled for and hour and fifteen minutes. Naturally there is no way Bob is going to adhere to that schedule (and management is well aware of his tendency to run over) which he did. After the show he always spends nearly 30 minutes (or more) signing autographs, etc.

We all pile into our cars and drive over to the Italian American Club for a late dinner. Ben Spano, one of the guys who runs things at the club, always sets aside a few tables for Bob and the gang when he’s in town.  This particular evening the wonderful Jerry Tiffe was starring in the filled to the rafters lounge. Tiffe, like Anderson, has been headlining in Vegas ever since I moved here as sports editor for the Las Vegas Sun newspaper in 1965 . He too was a huge favorite of Sinatra (as was Bob).

Anyhow this particular evening we ordered some food and booze. And, before he had finished his dinner, Bob was walking up to the stage to sing a song as requested by Jerry.  An hour later Bob returned to the table to finish his now cold dinner. I point his out as to why I refer to Bob Anderson as a throwback to the days when entertainers like Al Jolson were alive.

“They flat out do not design the entertainers of today like those old-timers who only wanted to do one thing—sing their ass off into the wee hours of the morning to a grateful audience.” 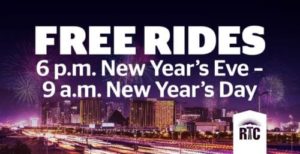 The Regional Transportation Commission of Southern Nevada (RTC) is again offering free rides on all its transit routes on New Year’s Eve, enabling anyone attending holiday festivities to do so without having to drive. From 6 p.m. on New Year’s Eve until 9 a.m. on New Year’s Day, transit riders can board any vehicle on the RTC’s 39 fixed routes without purchasing a pass or presenting fare. The free rides include express transit services between RTC operated park-and-ride facilities and partner lots located across the valley. Those celebrating New Year’s Eve can take advantage of the facilities, where it is free to park, to avoid the holiday traffic. Transit service to both the Las Vegas Strip and downtown Las Vegas is offered at the following RTC operated park & ride facilities:

In addition to free transit service, the RTC is making transit even more convenient for the holiday by adding service. In addition to the thirteen RTC routes that regularly run 24/7, several other routes will run on a 24-hour schedule or with extended hours, including the Strip and Downtown Express (SDX) service, which will run from midnight to 3:30 a.m.

Riders are advised to plan for extensive transit detours on New Year’s Eve due to celebrations on the Las Vegas Strip. The RTC encourages customers to plan their trip via the rideRTC transit app, which provides real-time information about bus locations. For complete detour and route details, visit www.rtcsnv.com. Additionally, the RTC transit system will operate on alternate schedules during the Christmas and New Year’s holidays. On Christmas Eve, Tuesday, Dec. 24, 2019, and on New Year’s Eve, Tuesday, Dec. 31, 2019, routes will operate on a Saturday schedule. Routes will operate on a Sunday schedule on both Christmas Day, Wednesday, Dec. 25, 2019, and New Year’s Day, Wednesday, Jan. 1, 2020.

The Las Vegas Metropolitan Police Department reminds everyone celebrating New Year’s Eve that strollers, backpacks and glass bottles are not allowed on the Las Vegas Strip and that all bags must be 12” x 6” x 12” or smaller. Read more online about the prohibited items on New Year’s Eve.

While the holidays fall in the middle of the week this year, travelers can expect a variety of delays along I-15 southbound as they travel to the Nevada-California border. According to the Southern Nevada Traffic Management Center, delays ranging from 30 to 60 minutes or more may occur on Thursday, Dec. 26 through Sunday, Dec. 29. Delays of up to 60 minutes may occur on Wednesday, Jan. 1 and Thursday, Jan. 2, as well as on Sunday, Jan. 5, as revelers who have celebrated all week-long travel back home.

One of my personal favorite restaurants is Oscar’s at the Plaza Hotel & Casino. And this year with live entertainment, a 1920’s themed party and downtown’s only live fireworks show, the Plaza overlooking Fremont Street will be the place to be for New Year’s Eve.

Oscar’s Steakhouse at the Plaza will host as 1920’s themed celebration features dancing and a midnight champagne toast. 1920’s attire is highly encouraged as the best dressed wins a two- night Stay in a Brand-New Luxe Suite, $250 Oscar’s Steakhouse Dining Credit and $50 Free Slot Play. The party begins at 9:00 p.m. Dinner reservations start at 5:00 p.m. and are available online at https://www.plazahotelcasino.com/dining/oscars-steakhouse/.

Guests will get to ring in the new year under a spectacular live fireworks show above the Plaza’s iconic glass dome at midnight.  In addition, Doug Stanhope returns to the Plaza to perform a special New Year’s Eve show Dec. 31 at 8:00  pm in the Plaza’s Vintage showroom. Stanhope has a comedy show on Comedy Central and has appeared on many shows including “The Howard Stern Show”, “Comedy Central Presents” and BBC’s “Floor Show Live.” There will also be late night live entertainment in the Plaza’s Omaha Lounge on the casino floor where people can continue the festivities into the early hours of 2020.

Well, gang, hope to see ya at the Italian American Club either Friday or Saturday evening.