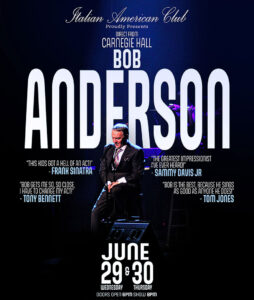 Once upon a time, People Magazine called Bob Anderson the very best singing Impressionist in the world. You know what? He still is! Out of all the current Tribute Artists on Broadway or on tour, VH1 named him  #1. The Hall of Fame singer will be back in Las Vegas for 2 nights performing his revamped show, “One More For The Road,” at the Showroom inside the Italian American Club on Wednesday and Thursday, June 29-30. This is a completely new show and is not the amazing Frank Sinatra show that he headlined for 11 months at The Palazzo Hotel & Casino on the Strip. Nope gang this is all new.

This will also mark Bob’s first appearance in our town (Las Vegas) since his Standing Room Only sellout performance at Carnegie Hall in New York a few months ago. Hall management was so pleased with the show he has been invited back for a second performance later in the year.

Anderson has re-designed his show to use his ability to perform other entertainers–where a number of impressionists just give you like a short medley of a song or two—Bob will now give you a much wider selection based around a specific singer. He will not just do a medley, he’ll perform at least two if not three complete songs that each singer is best known for, be it Frank Sinatra, Sammy, or Tony Bennett. Those are just three of the singers this writer knows for sure will be performed.

Bob has no rivals when it comes to capturing the essence of the artist he impersonates. What separates Anderson from other impressionists is his mastery of the signature style of each individual that he creates, and the level of detail devoted to each creation.

He is a superstar among his peers. Anderson is pure showmanship and talent. He makes you believe that you are truly watching some of the greatest entertainers that ever lived. Entertainers that gave us the greatest period of music that resulted in Las Vegas becoming “The Entertainment Capital of the World.”

Anderson’s story reads like a Hollywood novel. From opening for Nancy Sinatra, because a scheduled opening act had a disagreement within the group and quit. Bob was there at the right time, did a quick audition, and within seven hours was her opening act. He was later invited to a party at Merv Griffins home where Merv discovered Bobs act—doing impressions of the great singers of that time. Merv booked him on his television show and introduced him as “The Singing Impressionist.” The rest is a unique study in being at the right place at the right time.

Soon Bob was becoming a regular on every talk and variety show with over 200 national and international television appearances. He appeared on the Tonight Show starring Johnny Carson twice in one week. The only performer ever to do so. With all the television exposure, Anderson was given his own room at The Top of the Dunes Hotel where the show ran for an astonishing total of 10 years. Right from opening night, Anderson was the talk of Las Vegas.

“Don’t ever doubt that a mere second can change your life forever,” Anderson says. “Special moments happen in life that offer us the chance to do something we were created to do. It’s what we do in those moments that defines the rest of our lives. That one moment when I jumped out of my seat and said to Nancy Sinatra, ‘Hey, I’m a singer,  I can do whatever you need,’ brought me more than I could imagine.”

Buddy Rich, one of the most influential drummers of all time, once proclaimed to the Detroit Free Press: “There are only three singers good enough to sing with my group. They are Frank Sinatra, Tony Bennett, and Bob Anderson!”

Sinatra himself said it best, “This kids got a hell of an act.”

At the event, community and business leaders will discuss the city’s impressive recovery from the Great Recession and COVID-19, including the recruitment of professional sports teams and significant industrial development. The discussion will also include how business leaders can support and partner with law enforcement in Southern Nevada to promote public safety and thereby, future investment in the region. Tina Quigley, CEO, Las Vegas Global Economic Alliance (LVGEA), will moderate a panel discussion with Marc Badain, Oak View Group Arena, and Michael Naft, Clark County Commissioner, District A.

Naft is a staunch supporter and advocate for economic development in Las Vegas.

“The Southern Nevada Business Leaders Forum is a new LVMPD Foundation initiative designed to bring together the leading voices of the business community to discuss critical challenges and opportunities,” said Tom Kovach, Executive Director of the LVMPD Foundation. “The Forum will provide a venue for business leaders to invest in public safety to help make Southern Nevada a safer and better place for all, including the business community.”

This summer, explore the mind of one of the greatest geniuses of all time. On loan from the museum of Leonardo da Vinci in Florence, Italy, this amazing exhibition brings together creations and concepts devised more than 500 years ago by the brilliant scientist, inventor and artist, Leonardo da Vinci. With over 60 machines and artworks on display, many of which are interactive, the collection brings to life the most important and impressive designs of the original Renaissance Man, including: the bicycle, spring-­powered car, hang glider, helicopter, and for the first time, his incredible robotic drummer.

The exhibition is part of the Engelstad Foundation Traveling Exhibition Series, and is on display from Saturday, June 11th through Saturday, September 10th, 2022. The Las Vegas Natural History Museum is located north of Cashman Center at 900 Las Vegas Blvd N.

The exhibition is made in-part by Nevada Humanities and the National Endowment for the Humanities. The museum is open daily (including holidays) from 9:00am to 4:00pm; tickets are available online at www.lvnhm.org or at the door.

The American Planning Association (APA) recently recognized the Regional Transportation Commission of Southern Nevada’s (RTC) “Southern Nevada Extreme Heat Vulnerability Analysis study,” with the Quality-of-Life Award from its Sustainable Communities Division for Excellence in Sustainability. The Quality-of- Life Award honors a plan, project, or initiative that is focused on improving the health and well-being of a community.

The Vulnerability Analysis – completed in late 2021 in conjunction with local public health experts, planners, and researchers – highlights heat’s negative effects on the community and identifies areas in the region with populations most vulnerable to extreme heat. Southern Nevada’s urban core and east side are home to populations most vulnerable to extreme heat and these areas include many of our valley’s older neighborhoods.

“While everyone is affected by the intense desert heat, the study identified which populations are more at risk due to environmental, demographic, socioeconomic, and physiological factors,” said MJ Maynard, RTC chief executive officer. “Taking this comprehensive and multidimensional approach helps to ensure that interventions developed as a result of the analysis will target those most at risk while taking equity and environmental justice into account.”

With the knowledge gained from this study, the RTC and its partners are working now to identify opportunities to beat the heat.

The RTC will further research extreme heat and its impacts through a survey of transit riders and as part of the National Oceanic and Atmospheric Administration’s (NOAA) annual Urban Heat Island Mapping Campaign, both launching this summer. The RTC also intends to use the study results to work with agency partners to help secure grant funding for future infrastructure improvements, including cool pavement, urban tree canopy expansion and bus shelter design, as well as other initiatives that take the health and safety of transit riders into consideration.

This summer, the sizzling ladies of FANTASY, the award-winning topless female revue at Luxor Hotel and Casino, are bringing the heat with an exclusive 50% off offer for Nevada residents, available now through August 31, 2022. The offer is available for all Nevada residents over the age of 18 with a valid ID.

Show times are scheduled nightly at 10:30 p.m. inside the Atrium Showroom, with an additional 8 p.m. show on Sundays as well as additional shows June  12 and July 7 – 10. All guests attending the show must be at least 18 years of age or older with valid ID. For a full schedule and tickets, please visit fantasyluxor.com.

Captivating audiences on the Las Vegas Strip for 22 years, FANTASY has never been hotter, earning “All-Time Best Female Revue” and 2021’s, gold award for “Best Female Revue” and “Best Bachelor Party,” as well as the silver award for “Best Production Show” in the esteemed “Best of Las Vegas” awards by the Las Vegas Review-Journal. These recent accolades crown two decades of awards that also include Las Vegas Magazine’s Hall of Fame, and more than a dozen other awards. Fans may follow FANTASY on Twitter and Instagram @fantasyluxor or like FANTASY on Facebook at facebook.com/FantasyLuxor. Shows are nightly at 10:30 p.m. at the Atrium Showroom, with an additional show at 8 p.m. on Sundays. Tickets are available for purchase at the Luxor box office, online at fantasyluxor.com or by calling 702.262.4400.