Well, gang, we (Nancy Barr and Richard LaMotte) ventured out to the South Point Hotel/Casino last Saturday evening to catch Bob Anderson’s in the showroom, and what a show it was. As many of you know Anderson has been around Las Vegas for more than 40 years, starting out by being a last-second replacement for an opening act that left Nancy Sinatra standing on the stage at the Sahara Hotel without an opening act. Luckily for both Bob was watching the rehearsal, volunteered his services, and the rest is entertainment history.

I’ve known Anderson almost since the day he first arrived in our village. I’ve watched him grow through those years, and I was there when he presented his masterpiece as an impressionist. It was Sunday, May 4, 2014 when he walked out on the stage of the showroom at the Venetian Hotel/Casino and proceeded to perform a 90-minute show depicting the days when Frank Sinatra ruled over the Las Vegas Strip. The show, “Frank: The Man The Music,” is a musical masterpiece for one reason, and one reason only, and that is Bob Anderson. Not only  does he have the voice perfected, but Bob nails every little mannerism of “The Man,” and with nearly two-hours in a make-up chair he becomes the “The Chairman of the Board.”  It was that night and is still without question the brightest highlight of an illustrious career of doing impressions of famous singers.  Word has it heading for Broadway. 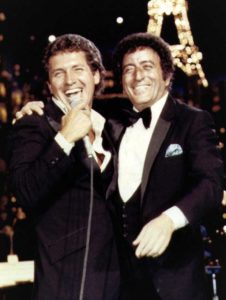 That was not the show we were watching this particular evening.  No this was Bob doing Bob, while also bringing  along the great voices of  about 12 singers of the “Great American Songbook.” Playing before a capacity audience Anderson struck gold with a series of songs starting off with “Learning the Blues,” “Once in a Lifetime,” “I Only Have Eyes for You,” among the opening seven songs, before he got to his first impression—Bobby Darin and “Mack the Knife,” quickly followed by a dramatic impression of the great Sammy Davis Jr doing “Come Back to Me” and the Anthony Newley hit “What Kind of Fool Am I.”  Wow there is none better than Anderson doing Davis!

His routine of Dean Martin is hilariously done: glass of booze, the ever-present cigarette, and the famous leap on the piano, while singing “Everybody Loves Somebody Sometime.” The laughter was without pause. Jack Jones’ “I am a Singer” was next followed by a very great “If Ever I Would Leave You” by none other than Robert Goulet.  God, it’s eerie how he can change his voice so easily, and quickly, from a tenor to a baritone, etc.  There comes a time when he tells the story of moving to Branson, Missouri, to work alongside Andy Williams.  Tom Jones is another highlight of the evening when he performs two of his hits, my favorite being the “Green, Green Grass of Home,” first performed by Porter Wagner 1965 and it became a number-one  hit for Jones in 1966.

Of course there is the traditional Sinatra presentation “Send in the Clowns,” and when he strolls through the audience singing “Your Going to Hear From Me” you can hear voices shouting out the one song, I believe, everyone was  waiting for all night (I know I was) and he delivers it just as Paul Anka wrote it: “My Way!” It was a perfect 92 minutes of film, stories, music, and Bob Anderson.

My guest that evening, Richard LaMotte, was very special for me personally and later that evening at the Italian American Club. See, folks, he has been serving in the United States Air Force for 28-years (I was in the Air Force during the Korean War 1950-54) and is a Senior Master Sergeant serving on the blue and white Boing 747 best known as Air Force One. Its present occupant is the President of the United States Donald J. Trump. LaMotte has served Presidents Bill Clinton, George W. Busch, Barack Obama, and now President Trump. He presented me with a Challenge Coin specially made for Air Force One and another one for President Trump. More on Sergeant LaMotte in a future column.

Back by popular demand, Las Vegas Motor Speedway’s Turn 4 Turn Up area yet again will give race fans a cool place to enjoy the races next weekend. The special gathering spot – located on the concourse level above Turn 4 – will feature everything from a Ferris wheel to a swimming pool, food trucks, music with a live DJ, games and drink specials during the Sept. 13-15 race weekend. Turn 4 Turn Up will serve as one of several cooling zones LVMS is implementing throughout the facility, and the festival-like atmosphere will give fans the chance to see NASCAR racing like never before.

NASCAR fans can meet Monster Energy NASCAR Cup Series drivers Matt DiBenedetto and Corey LaJoie at the Turn 4 Turn Up area at 1 p.m. on Sunday.  Turn 4 Turn Up gives visitors a breathtaking view of the 1.5-mile speedway and the Las Vegas Strip as an iconic backdrop. The unique area was a big hit when LVMS unveiled it as part of last year’s South Point 400 weekend and has become a favorite spot for race fans of all kinds.

The speedway’s second NASCAR tripleheader weekend of the year starts with the World of Westgate 200 NASCAR Gander Outdoors Truck Series Playoff race at 6 p.m. on Friday, continues with the Rhino Pro Truck Outfitters 300 NASCAR Xfinity Series event at 4:30 p.m. on Saturday and culminates with the South Point 400 Monster Energy NASCAR Cup Series playoff kickoff at 4 p.m. on Sunday.  To order tickets or specialty passes for race weekend, call 1-800-644-4444 or log on to www.LVMS.com.

This season saw major changes for professional baseball in Las Vegas, and those accomplishments were recognized in the 2019 year-end awards from ballparkdigest.com, with Las Vegas Ballpark® named Ballpark of the Year and the Las Vegas Aviators® named Team of the Year. This year’s selection of both Las Vegas Ballpark and the Las Vegas Aviators for major citations make history in the annual Ballpark Digest Awards: It’s the first time an organization has snared both awards in a single year.  The awards was recognized on the field during the pre-game ceremonies at Las Vegas Ballpark when the Aviators played the Tacoma Rainiers and celebrated during a post-game firework show.

The year-end Ballpark Digest awards annually honor the best of the baseball industry, covering MLB, MiLB, independent-baseball, and summer-collegiate programs in a wide range of categories. The Ballpark of the Year and Team of the Year announcements are the kickoff to awards season for Ballpark Digest, with announcements running through the fall and culminating in an awards reception at December’s Baseball Winter Meetings.

“The Las Vegas Aviators not only opened a new ballpark in 2019, but also overhauled their whole business, ranging from an offseason rebranding to a total revamp of the concessions and hospitality programs,” Reichard said. “Just opening a new ballpark at a high-quality level is a big accomplishment. What the Aviators did with their partners is basically start from scratch, ending up with a new facility that’s leading the minors in attendance.”

The selection of Las Vegas Ballpark for Ballpark of the Year comes in a banner season for new and renovated pro baseball facilities. “Fans were blessed by an abundance of riches this season,” Reichard said. “We saw great new ballparks open in Fayetteville and Amarillo, with the Milwaukee Brewers debuting a noteworthy renovation at American Family Fields of Phoenix. All four facilities advanced the art of ballpark design.”

This is not the first time Las Vegas Ballpark has been honored by Ballpark Digest: Earlier this season Las Vegas Ballpark was the winner in the annual Ballpark Digest Best of the Ballparks fan vote for Triple-A facilities. Over 85,000 fans voted in all five rounds of the Triple-A Best of the Ballparks fan vote, with almost 600,000 fans voting in the overall competition.

It’s back! Las Vegas favorite BOH Brawl is returning this fall to finish the season with outstanding cocktail fights and chef showdowns at a new location – The Sand Dollar Lounge. Starting September 14, the culinary community and beyond can join the BOH Brawl team and local celebrity judges for food, drink and glory. “We’re so excited to bring BOH Brawl to The Sand Dollar Lounge this Fall,” says BOH Brawl Founder Jolene Mannina. “It’s another round of great chefs, outstanding drinks, and all of the smack talking you can handle – we can’t wait!” 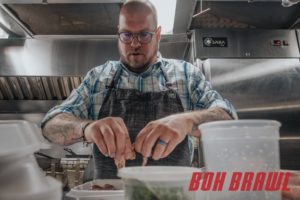 The September and October parties start at 10 p.m. with food trucks like Cousins Maine Lobster and Boqueria Street. The signature cocktail throwdown, Cock Fight kicks off at 12 a.m. and the chef showdown launches at 1a.m. with the Eataly-sourced secret ingredient reveal. Chefs will have 30 minutes and a food truck to create two dishes to impress judges and bring home the glory. BOH Brawl’s fall schedule mixes strip and local chefs, finishing with a Championship Round November 17 at a new time – 3PM. Confirmed judges include returning BOH Brawl Champion John Courtney, Echo and Rig’s Sam Marvin, and local Hakkasan USA Head Mixologist Tim Weigel, who will preside over team challenges. 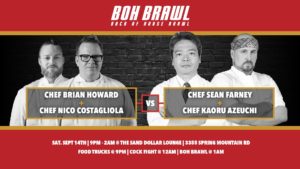 Well, gang, off to see Rich Little inside the Laugh Factory at the Tropicana Las Vegas.