A young, beautiful and talented singer, Bre Lawrence, will make her Smith Center for the Performing Arts debut this coming Sunday (Nov. 13) at 2:00 p.m. in the Cabaret Jazz Room, as part of the monthly fund raising effort for the Musical Arts Scholarship Program presented by Frank LaSpina.

Lawrence, a student in the scholarship program, arrived in Las Vegas in 2014, with a degree in Graphic Arts, when she met LaSpina, founder of the scholarship program. The two struck up a conversation, and within a month Bre was enrolled in the program, where she returned to one of her very special loves, singing and playing the piano, a fondness that started during her childhood in her home state of Virginia.

Bre’s talent blossomed under the tutelage of Frank, and within a year she was starring in the stage biography of Diana Ross, for which she received fantastic reviews and outstanding praise from the audience that afternoon at the Italian American Club. A role she will reprise at the Smith Center Sunday afternoon.

Currently, Bre is a contestant in the televised pageant, “The World’s Most Beautiful Woman”, a program that will showcase one of her other talents: a black belt in martial arts!

The Musical Arts Scholarship Program presents a series of Sunday afternoon monthly fund-raising shows at both the Smith Center and the Italian American Club. LaSpina has created a concept he calls “stage biographies“. Using his background in television, he presents, on large video screens, rare photos and film clips from the career of a given entertainment legend subject, as he tells well-researched, often surprising, stories from their lives, then recreates their signature numbers. Frank has assembled new footage for this special performance at the Center, along with some of the great musical hits made famous by Ms. Ross. Just a few of the musical selections to be presented by the pair are: “Stop! In the Name of Love,” “You Can’t Hurry Love,” “Where Did Our Love Go,” and “Baby Love.,” 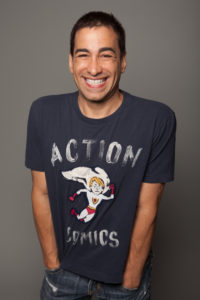 Just a friendly reminder that Mitch Fatel, Brian Scolaro, and Frank Del Pizzo are headlining at The Laugh Factory inside the New Tropicana Resort this week through Sunday. Mitch has been showcasing his talent to rave reviews for the past 15 years. The number one requested comedian on Satellite Radio, Mitch has appeared numerous times on all the Late Shows. In 2006 he took home honors as “Best Comedian” at the prestigious HBO Aspen Comedy Festival, and in April of 2007 his half hour stand up special debuted on Comedy Central and was ranked #6 all time by viewers.

Scolaro is an actor, writer and stand-up comedian, who has performed stand-up on his own half-hour special, “Comedy Central Presents: Brian Scolaro,” as well as on “The Late Late Show with Craig Ferguson,” “Late Night with Conan O’Brien,” Comedy Central’s “Live at Gotham,” and ABC’s “Comics Unleashed.” He also appeared on Showtime’s “Dexter,” AMC’s “Mad Men,” ABC’s “Grey’s Anatomy,” NBC’s “Harry’s Law,” and TNT’s “Men of a Certain Age,” and numerous appearances on HBO’s “Life and Times of Tim.”

Likeable and friendly, this New Jersey native Frank Del Pizzo came from the real world to the comedy stage. Frank has entertained a wide variety of diverse crowds, as the opening act for legendary comedians from Sam Kinison to Rita Rudner, and has thoroughly pleased every audience he encounters. Frank has traveled the country and the world delivering laugh after laugh wherever he goes. Frank loves what he does and it shows. His sharp, original comedic nature and quick wit make him a tough act to follow! Show times are 8:30 and 10:30 p.m.

For the first-time ever, vegans and gluten-free diners alike can indulge in Triple George Grill’s all new Glegan menu. Highlights include the Southwest Burger, made from a soy patty, topped with chipotle mayo, grilled onions, jalapeños and guacamole; Chicken Stir Fry with gardein chicken, squash, zucchini, carrots, broccoli and rice; Penne Primavera complete with zucchini, squash, red peppers and spinach tossed in a tomato sauce, Cauliflower Rice, a combination of shaved cauliflower, carrots, celery, onions and edamame, tossed in sesame oil and more.

The name Triple George Grill was Inspired by the “George,” a high-minded, noble individual who is free in giving and sharing, shows gratitude when special services are rendered and generally lives life to the fullest. The TripAdvisor® Certificate of Excellence Award winning restaurant is popular for blending classic dining with the charm of a neighborhood restaurant. Guests experience a fresh selection of American-style seafood, steaks and chops as well as homemade soups, salads, pasta dishes and daily specials. It is located at 201 N. Third Street, and is open Monday through Friday for lunch 11 a.m. to 4 p.m. and open daily for dinner from 4 to 10 p.m. Complimentary valet parking is available at Downtown Grand. Reservations may be made online at online, or by calling (702) 384-2761. For more information, visit www.TripleGeorgeGrill.com.

Las Vegas favorites Santa Fe & The Fat City Horns is returning home. Founded by the legendary Jerry Lopez, the renowned band cut their teeth in the Las Vegas entertainment scene more than 40 years ago and will be returning to the Station Casinos family with weekly shows at The Lounge inside Palms Casino Resort. The super band will perform every Monday at 10:30 p.m., beginning Monday, November 14, 2016. For more than 40 years, Santa Fe & The Fat City Horns has been one of Las Vegas’ most popular bands, never giving less than 100% to their audiences. A “farm club” for many headline acts, shows and bands, many incredible musicians have honored its ranks. The latest incarnation of this band features a six-piece horn section, a six-piece rhythm section and five lead singers. This is no ordinary band, no sir.  It’s made up of the most talented musicians currently performing in Las Vegas. Santa Fe & The Fat City Horns perform a seamless blend of funk, Latin, rock and jazz.

Tickets for Santa Fe & The Fat City Horns are $10 plus tax and applicable fees and can be purchased at the Palms Box Office. Doors open at 9:30 p.m. and guests must be 21 years or older. For more information, please visit www.sclv.com/concerts or www.palms.com.

Critically acclaimed actress, comedienne, producer, and host Whoopi Goldberg will return to Treasure Island November 11 at 9 p.m.  An early review described the future icon as “not simply a stand-up comedian but a satirist with a cutting edge and an actress with a wry attitude toward life and public performance.” More than three decades on, Goldberg’s comedy has evolved but not lost the side-eye-sharp perspective that made her one of the most popular comedians in the world.

Goldberg made her on-screen debut in an ensemble feature titled “Citizen: I’m Not Losing My Mind, I’m Giving It Away.” She then went on to perform on Broadway in her self-created, one-woman show called “Whoopi Goldberg” which opened the doors to the role of a lifetime in Steven Spielberg’s “The Color Purple.” Goldberg won her first Golden Globe for her role in the film, starring alongside Danny Glover and Oprah Winfrey. In 1991, Goldberg won an Academy Award for her performance as “Oda Mae Brown” in the movie “Ghost.” She continued to further her acting career with roles in popular comedies including “Sister Act,” “How Stella Got Her Groove Back” and “Made in America” and went on to become one of the only artists to win an Emmy®, Grammy®, Oscar® and Tony® award.

She currently serves as a moderator on the popular televised talk show “The View” and voices the role of “The GameMaster” on Disney channel’s “Miles from Tomorrowland.” Tickets are available starting at $69.95, plus taxes and service charges, and can be purchased by calling 866-712-9308 or 702-894-7722, or visiting www.treasureisland.com.