One of this writer’s favorite comedians is a youngster who just keeps getting younger. He also happens to love dogs, has a son who is pretty funny, and we have a few mutual friends, some dead and some dying.  Oh, his name? Why it’s Sammy Shore.  Anyhow, I promised him (I had too, or he would’ve probably called one of those mutual friends and I might get a call at 3:00 a.m.), and I don’t like those particular phone calls, know what I mean? So, I’m writing this column, and I was just kidding about the phone call! 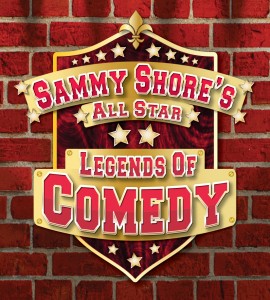 Anyhow, Sammy Shore’s – Legends of Comedy is coming to the Wolf Theater at the Clarion Hotel & Casino on Saturday nights at 8:00 pm.  Join Sammy and, Pete Barbutti, and some surprise special guests, for an evening of laughter and hilarity. You never know who may stop by to watch the Master of Comedy do his thing. One thing you can expect when you spend an evening with this “gentle man,” is he works clean. If he uses a four-letter word, it will be something like, “darn,” or maybe “gosh.”  Why is Sammy Shore considered the Master? One of the reasons, he’s outlasted all the greats of his day—Hope, Berle, Burns, Benny, King, Lord Buckley, Bruce, Pryor, Hackett, Vernon, and Kinison, to name just a few of those who graced the stages of the world.  Many of today’s guys and lady’s, before they made it to the top, studied Sammy on delivery and timing. One of the best at timing, everyone agrees, was the wonderful Jack Benny. He could outlast the laughter!

I remember one particular night when Sammy was the opening act for Tony Orlando at the Suncoast Hotel. The showroom was full, and Shore had been into his act for about 10 minutes, when the fire alarm went off. He looked off stage for a sign, turned back to the audience, pulled up a stool, and continued to tell stories while the darn alarm kept making that terrible noise. Finally it stopped. Sammy had outlasted the fire alarm. There was a standing ovation when he ended his 25 minutes.  The point being, he knew there was no emergency, and if there had been an actual emergency, he was prepared to keep his people, the audience calm.

Shore, a living comedy legend, gained notoriety by being “the man who made Elvis laugh,” and subsequently opened for Elvis at the International Hotel on Paradise Road (now LVH and formerly The Hilton) during “The Kings” legendary run in Las Vegas from 1969 to 1972.  Sammy Shore also opened the world famous Comedy Store in Los Angeles, which launched the careers of virtually every great stand-up comedian of today.  Sammy is now back in Vegas to bring his comedy, as well as the comedy of his legendary friends, to the Wolf Theater, which is fast becoming a classic Vegas venue like in the “good old days.”  This intimate setting should be the perfect venue to showcase the talents of a Master comedian.

Sammy Shore’s – Legends of Comedy can be seen every Saturday at 8:00 pm.  Tickets are available starting from only $20, and can be purchased by calling the Box Office at 702.990.1524 or visiting www.wolftheaterlasvegas.com.  The Wolf Theater is located inside Clarion Hotel & Casino (Formerly the Greek Isles), 305 Convention Center Dr.

My buddy, and one hell of a nice guy, and the son of a guy I used to race against, Michael Gaughan, and who drives the No. 2 South Point Hotel & Casino sponsored NASCAR truck, Brendan Gaughan, finished fourth under the lights at Las Vegas Motor Speedway in the Smith’s 350 NASCAR Camping World Truck Series race. Gaughan started the 146-lap event from the sixth position and reported a tight-handling condition during the initial run, dropping to 10th in the running order. Crew chief, Gere Kennon, called the Las Vegas native to pit road under caution on lap 32 to get four tires, fuel and a round of chassis adjustments. With other teams opting for two tires, Gaughan was scored in the 18th position for the ensuing restart. The No. 2 Chevrolet team continued to battle a tight-handling condition for the next 50 circuits around the 1.5-mile track. Kennon brought Gaughan back to pit road on lap 101, during another caution period for four tires, fuel and additional chassis adjustments. Gaughan restarted 16th with 40 laps remaining. Climbing as high as the third in the closing laps,  the

37-year-old driver slipped one spot to take the checkered flag in fourth place, but running hard.

“The No. 2 South Point Hotel & Casino Chevrolet team worked really hard tonight to get this truck where it needed to be at the end of the race,” Gaughan said after the race. “We were fast there at the end, but didn’t have enough laps to get the job done. I love racing here in my hometown, and especially for Richard Childress Racing. I can’t thank the guys and Gere Kennon enough for the great truck this weekend.”

Another Las Vegas resident, who has moved into owning a NASCAR race team, Kyle Busch, returned to Dover (Del.) International Speedway Saturday, making his 17th start as the owner-driver of his first-year No. 54 NASCAR Nationwide Series team. From a seventh-place starting spot, the Monster Energy crew and driver battled a rain-worn race surface, cool track conditions, and the car’s loose handling, to register a fifth-place finish. The result was the team’s 11th top-five grab of the season and Busch’s seventh top-five finish of his career in the Nationwide Series at Dover.