There are two events taking place this weekend at the Silverton Pavilion, honoring the veterans of World War II. Both are under the banner, “The Spirit of 45 Nevada,” will get underway celebrating the 70th anniversary of the end of the Great War. “The Spirit of 45 Nevada,” is our state segment of the nationwide non-profit project to establish events to remember, honor and celebrate the achievements of America’s Greatest Generation. The first event takes place on Friday, August 14th with the main event held on Sunday, the 16th from 2:30 – 4:00 pm.

The two events are: Friday’s Theme – August 14th: “Honoring, remembering, paying tribute to the men, women and children of World War II and “America’s Greatest Generation.” The tentative schedule includes a musical tribute/remembrance of WWII vets, and their families under the direction of host Bruce Ewing.  Scheduled performers include Randal Keith and Nicole Kaplan from Steve Wynn’s Showstoppers. A Certificate Award to all World War II veterans at the event, with a special “Legion of Honor Ceremony,” awarded to two local WW II veterans, which will be presented by the French Consulate. Tickets will be a $5.00 donation.

Sunday’s Theme – August 16th: The theme will be “Celebration.” The goal is to recognize “America’s Greatest Generation’s Greatest Day” – the unrestrained joy that occurred 70 years ago in Times Square and throughout the United States when it was announced that World War II was over.

The host for the afternoon will be Bob Anderson, who is currently appearing as “Frank. the Man .The Music,” at the Palazzo on the Strip. Other performers participating include: Clint Holmes, Chadwick Johnson, Swing City Dolls, The Desert Tenors, Rob Garrett, Mark Giovi, Bill Fayne, Michele Johnson, Geneviève and a few more surprises. Tickets will be a $19.45 donation. For more information & tickets, contact Evan Davis 702/630-6111 or [email protected]

Anniversary events for shows in Las Vegas are a dime a dozen, but for entertainer Gordie Brown, they are ideal for amassing family, friends, and fans, if only to have an excuse to throw a party. The longtime Las Vegas headliner will celebrate “Gordie at 1,740” on Thursday, August 20 at The Golden Nugget Las Vegas. The ‘gold carpet’ event will toast Gordie’s “Almost at 2,000” landmark number of performances at the iconic downtown hotel and casino, while also unveiling new impressions and new songs.

“Every show in Vegas, hopefully, reaches some sort of milestone, and more power to them,” said Gordie. “We just wanted an excuse to party.”   Gordie, who has performed in Las Vegas for more than 27 years, began headlining at The Golden Nugget Las Vegas in February 2009 in the state-of-the-art theater now known as the Gordie Brown Showroom, following a North American tour with Celine Dion. A multitalented entertainer, Gordie brings         to life iconic stars including Elvis Presley, Sammy Davis Jr., and Arnold Schwarzenegger, among a dozen or more dead-in impressions alongside a five-piece live band. A native of Montreal, Canada, Gordie moved to Las Vegas with the goal of working with fellow Canadians Paul Anka and Rich Little. This reporter first saw him at the Sahara Hotel, when he was an opening act for Little. The gamble paid off and before he knew it, Brown was opening for both Anka and Little. Gordie went on to work with other stars including Jay Leno, Louie Anderson, Kenny Rogers, Randy Travis, Barry Manilow, and Jerry Seinfeld, before opening up his own headlining show.

“Life’s too short to take yourself too seriously,” said Gordie. “At my show, we’re all about having a good time and a good laugh, and turning that into an unforgettable night. I only perform my 1,740th show once, so we might as well have a great time doing it.”

Gordie Brown performs Tuesday, Wednesday, Thursday, Saturday, and Sunday in the Gordie Brown Showroom at The Golden Nugget Las Vegas. Tickets to the show can be purchased at www.goldennugget.com or by calling (866) 946-5336.

“Debuting Wild Magic and having the opportunity to perform with my cats on the same stage that Elvis once did is a dream come true for me in Las Vegas,” said Arthur. “I’m excited to unveil electrifying new illusions and share the experience with guests of all ages at Westgate Las Vegas!”

Arthur has long been a leading advocate for the preservation of endangered species and for the humane and proper care of all animals. During the show, audiences will experience Dirk’s love for his animals as they are treated with the utmost respect and gentleness. Arthur uses his platform to raise funds for various animal care and conservation programs. In fact, a portion of merchandise sales are donated to organizations that promote awareness and education regarding the importance of wildlife preservation. He has been performing around the world delighting audiences of all ages for 30 years. His original illusions included a floating car, and he is still recognized as the first magician in history to make a helicopter appear. This helicopter illusion has since been widely copied and has become a staple of many other magicians, although none can perform it quite as well as Arthur. He has even taken the illusion a step further now by causing it to vanish and reappear, hovering over the audience. 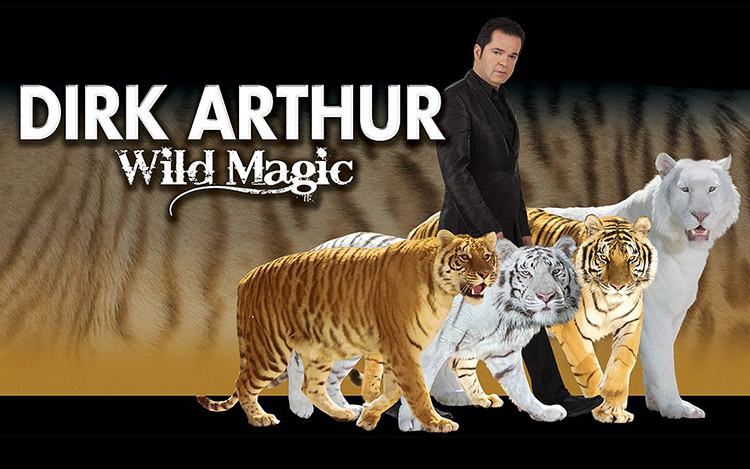 His natural affinity for animals immediately came into effect in his act as he worked with rabbits, doves, large birds such as emus and ostriches, and eventually, large exotic cats. His family of big cats currently holds no equal in the performing world and includes white, orange and snow white tigers; African and snow leopards; ligers and a bobcat.

“We are excited to announce Dirk Arthur Wild Magic to Westgate Las Vegas Resort & Casino,” said David Siegel, Founder and CEO of Westgate Resorts. “Adding family friendly entertainment of this caliber will provide another opportunity for our guests to create magical memories for years to come.”

Well, gang, I guess that’s about it for another week.