As many of my readers know I have been very fortunate over the 53 years I’ve been a resident of this village we live in. I’ve had the privilege to see some of the greatest entertainers in the world perform—from Frank Sinatra to Barbra Streisand to Pavarotti, you name the performer and at one time or another I saw them on a stage in Las Vegas. So, having seen the best, I keep looking for some of that magic to return. I loved those early years and if you’re like me you know they will never return. That time is gone.

Well, gang, the above thoughts were changed when I attended a new show at the Westgate Resort on Paradise Road last Friday: “Soundtrack, Your Songs, Our Stories, The Show,” starring two of the best tenors working today, 2018 two-time Grammy nominee Clint Holmes and his friend of many years Earl Turner, in a magnificent return to those days of fond memories.

The two entertainers, who have had fantastic separate careers over the years, have, thank God, joined forces to bring back some of the past in a 90 minutes presentation on the same stage where Elvis, Barbra, and perhaps the greatest of them all, Liberace once performed.

As the title of the show indicates, they have brought back some of that time when a song was meant to be heard, and you would go home humming the tune. And they had words you understood.  And the words, oh how some of those words were so beautifully presented.  That was the time when you could hear and understand the words. Well, believe me when I tell you, that is what this show is all about.

Right off the bat the first song, “The Boys are Back in Town” (1976) set a great mood for the rest of the evening and we, my guest Linda Molnar, couldn’t wait to hear what was coming next, which was “Lovely Day/Just the Two of Us,” (2003/1980). What is so darn neat is that these two voices blend together so nicely, and their solos are beautifully presented. “On Broadway/Uptown Funk” (1964/2015) is an example of yesterday’s music combined with a song of today, which the pair present brilliantly.

Both performers do a couple of solos, with Clint presenting two songs from his Gammy nominated album, “Rendezvous.” With impeccable jazz timing and phrasing Holmes hits it big with “Say Something” (2013) and the title song displaying his smooth tenor voice.

For me personally, the highlights were three songs so wonderfully sung by Clint and Earl. “Love Me Tenderly / Can’t Help Falling in Love,” (1956/1961) which were delivered with honest-to-God feeling for the man who sung those two songs so many times on that very stage—Elvis Presley.  I mentioned after the show to the man who directed the show, David Gravatt, they should record that presentation.

The third song was one of my very personal favorites having watched Sammy Davis, Jr., perform it so many times, “Mr. Bojangles” (1970). Earl did it so magically, he owned it! It was as though Sammy had taken over his body and was once again on the big stage, a sound of tap dancing by Clint giving it a wonderful finish. After all, Turner is a song-and-dance man as was Sammy. There are not too many of them performing today.

How do you get two independent individuals to combine their talents to create a new show? Fortunately, Earl and Clint have been friends for a long time, and have on occasion performed together impromptu. Enter David Gravatt.  When an executive from the Westgate approached the three men with an idea for the showroom–Would they consider creating a new show for its venue? Clint, Earl and David got together and agreed to give it a shot. Music director Christian Tamburr was brought on board, and they began selecting songs that would make the show totally new and would not be a typical Clint or Earl performance.“ We wanted to take some of the old, and make it new again,” Gravatt explained. “And, combining the extreme talents of both Clint and Earl was delicate and fantastic at the same time.” Five months later they were on stage at the Westgate.

And, of course none of this would be possible without the music, which is provided by a group of eight musicians directed by pianist/vibraphonist Christian Tamburr. The band is comprised of Stephen Flora on bass; Kevin Cloud, drums; Pablo Gadda, guitar; Rocco Barbato, tenor/alto sax; Ramiro Naselio, trumpet/flugel horn; Andrew Boomstrom, trombone, and Serena Henry backup vocalist. 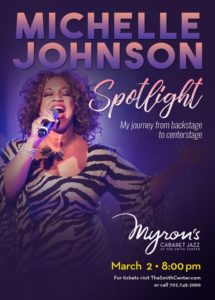 On Friday night, March 2, 2018, Las Vegas’ “First Lady of Jazz,” Michelle Johnson will shine a light on the hit songs of the all-time musical greats she has worked with, as she presents her musical show “SPOTLIGHT: My Journey from Backstage to Center stage” in Myron’s Cabaret Jazz at The Smith Center.

Although she has earned the title of “Las Vegas’ First Lady of Jazz,” Johnson is the consummate vocalist, equally at home in all musical genres. Audiences at “SPOTLIGHT” will experience great selections of jazz, R&B, rock, and pop in recognition of her association with iconic megastars in each category. Michelle’s soaring vocals and ability to engage an audience in a dynamic, personal, and intimate way have made her a favorite in cabarets and performing arts centers across the country. She has appeared in and executive-produced several sold-out shows at Myron’s Cabaret Jazz including, “Tapestry Unraveled” (a tribute to Carole King), “Forever Purple” (an all-star tribute to Prince), and “Strictly Taboo” (celebrating the great ladies of jazz).

Johnson’s versatility, affinity for languages, unique voice, and impressive range have made her a rare find in the music business. She primarily grew up in Cairo, Egypt, then moved back to the United States and attended and graduated from Yale University. Her original path to Harvard Law School diverged onto a different route when her passion for the entertainment industry won out.

“SPOTLIGHT” will feature a band led by Musical Director/Conductor and Arranger Joe Escriba, who has produced numerous arrangements for production shows, television, film, radio, celebrities, and lounges worldwide, and is the current associate music director of “Legends in Concert.” Escriba has worked with some of the biggest stars in the entertainment industry including Celine Dion, David Foster, Diana Ross, Don Henley, and The Ojay’s.

“SPOTLIGHT” will take place at 8 p.m. To purchase tickets, call the Smith Center box office at 702.749.2000 or visit https://www.thesmithcenter.com/event/michelle-johnson-spotlight/.

A hometown boy will go for the sweep at Las Vegas Motor Speedway this weekend.  Kyle Busch, the 2015 Monster Energy NASCAR Cup Series champion, will compete in all three races of the speedway’s first-ever NASCAR tripleheader Friday through Sunday. The Las Vegas native will race in the Stratosphere 200 NASCAR Camping World Truck Series event on Friday, then get behind the wheel again on Saturday for the Boyd Gaming 300 NASCAR Xfinity Series race before going for the checkered flag in Sunday’s Pennzoil 400 presented by Jiffy Lube MENCS race. His older brother, Kurt, is another of 37 entries in Sunday’s 267-lap race, and there are other area drivers competing over the weekend as well. Spencer Gallagher will drive the No. 23 car in the Boyd Gaming 300 on Saturday, while former Bullring star Noah Gragson is racing the No. 18 truck for Kyle Busch Motorsports in the Stratosphere 200 on Friday.

An interesting note about Noah Gragson: He is the Great-Grandson of the longest running Mayor of Las Vegas, Oran K. Gragson, who served from 1959 through 1975. When I was an executive with the Mint Hotel in the mid-sixties, I met and married my second wife, Dori. The wedding was held at the Mint Hotel and the Mayor served as my best man. There are so many places, services, and roads named after this wonderful and visionary man. He had a kind soul, and was beloved by the 164,000 men, women, and children who lived in the City, and the 461,000 living in the county, when he was first voted into office. He passed in 2002 at the age of 91.

Daytona 500 Champion Austin Dillon will pull double duty on Saturday and Sunday, as will Ryan Blaney, Kyle Larson, and Cole Custer. Sunday will mark Custer’s career debut in the MENCS, and Daytona 500 runner-up Bubba Wallace also will compete in the MENCS for the first time in Las Vegas. Reigning MENCS Champion Martin Truex Jr. will be back to defend his 2017 Las Vegas victory on Sunday, with Ben Rhodes going for two in a row in the track’s NCWTS race on Friday.

There are tentatively 41 entries for Saturday’s Boyd Gaming 300, with 31 entries lined up for Friday’s Stratosphere 200. On-track action begins at 2:05 p.m. PT on Thursday with a NCWTS practice session, and a second practice session for the trucks following at 4:05 p.m. The grandstands will be open on Thursday, but the Neon Garage in the speedway’s infield will be closed.

Various ticket packages, fun extras and special-access passes for LVMS’ first NASCAR tripleheader weekend of the year are available at www.lvms.com or by calling 1-800-644-4444. I will be returning now and then to see and listen to the music of “Soundtrack,” it’s that damn good! I’m heading for the speedway this weekend.