One of the better known single named performers in Las Vegas, Dondino, a world-famous singer and entertainer is set to delight audiences with his magnificent voice and luminous stage presence on Wednesday, October 27 at the popular Italian American Club, 2333 E Sahara Ave, Las Vegas, NV 89104. We first met back in 1982 when he was performing at the New Frontier Hotel/Casino (imploded in 2007), and we have extended that friendship to this day I’m proud to say. I’ve always called my friend, “Mr. Smooth!” If you have never seen him perform in person I’m telling you folks, this is a must see show if there ever was one!

For this intimate evening of song, Dondino told me that he will be performing a mix of popular standards, as well as new and original compositions, The production combines a lush orchestra, a talented cast of masterful musicians, slick choreography, and a beautiful set design—all in a dazzling display of showmanship. 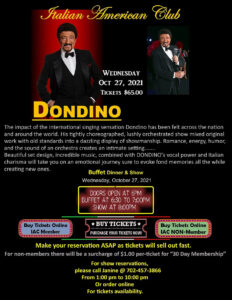 Known to have built a worldwide fan club, Dondino has garnered fans from around the world with his powerful vocals, charisma, and lavish production numbers for nearly  four decades.

“We’re so excited for our audiences to experience Dondino’s exceptional talent and his unique ability to make each and every person in the room laugh, sing along, and feel totally ‘at one’ with him throughout the show,” said Angelo Cassaro, the Italian American Club President. “With his captivating energy, humor, and swoon-worthy serenades, Dondino will once again take audiences on an emotional journey right from the opening number to the finale—reigniting fond memories and creating new ones that are sure to last a lifetime.”

Widely praised for his unparalleled breadth and versatility as a singer and a performer, Dondino is as much at home on stage as he is in other areas of life. He maintains a major career as a concert artist and has appeared on the great stages of the world including, but not limited to, the elaborate Latin Quarter in Japan, Palm Springs Hilton Rivera, Caesars Palace Las Vegas, Atlantis Hotel Casino in Atlantic City, Silverbird Hotel Casino, and the Four Queens Hotel, to name a few.

Off stage, Dondino is a passionate advocate for humanitarian and civic responsibility. Apart from championing several worthy causes, he is also the Founder and President of the Read To Me Foundation (www.readtomefoundation.org) which is dedicated to promoting literacy for children. The organization distributes free new, hardcover, bilingual (English- Spanish and English-Hawaiian) children’s books to the  Head Start programs: Ronald McDonald Houses, children’s hospitals, and other organization.

Arizona Charlie’s, a Las Vegas favorite with casinos at 740 S. Decatur Blvd. and 4575 Boulder Highway, has completed property updates at both locations and will debut its new “Locals Serving Locals” brand campaign in October. The new campaign celebrates its team members and the countless Las Vegas locals who regularly visit the award-winning casino for bingo, dining, slots and more. Both Arizona Charlie’s Decatur and Boulder will commemorate the property upgrades and new campaign with various promotions and giveaways, starting in October.

“Las Vegas locals are what make us who we are at Arizona Charlie’s,” said Arizona Charlie’s Vice President and General Manager, Jeremy Jensen. “Our hard-working team members are a part of the same local communities as our guests and bring that neighborly attitude and spirit with them to work every day. Our team members and guests are like a big, happy family and we are thrilled to elevate and celebrate these truly special locations many consider their homes away from home.”

Arizona Charlie’s kicked off its celebration with a Guest Appreciation Day on Friday, Oct. 1, where cake, champagne, and a celebratory T-shirt were given out to guests at both locations, while supplies lasted.

Every Wednesday and Saturday in October, guests may receive free gifts such as logoed vests, tumblers, jackets and more. Every Wednesday and Thursday in October, guests who earn 300 same day base slot points will receive the gift of the day. Additionally, all guests who sign up for a new True Rewards membership will receive a Locals Serving Locals branded magnet bumper sticker, while supplies last.

Recent refreshes made to both Arizona Charlie’s properties include the addition of Dunkin’ Donuts and PT’s Express, exterior painting, new signage, updated bingo rooms and more. At Decatur the casino floor upgrades included new table game felts with Locals Serving Locals branding and multiple wide screen TVs. The Palace Grand Bar, Elbow Creek and Jake’s Bar have all been remodeled. Additional renovations will take place throughout the remainder of the year.

Just days after Las Vegas Motor Speedway celebrated its 25th birthday, the speedway is announcing the creation of a new program to honor its history as well as NASCAR’s glorious past. LVMS revealed the creation of the Speedway Legends program that each year will honor a key player from NASCAR’s past at the South Point 400. The first honoree will be NASCAR Hall of Famer Mark Martin, the winner of the inaugural NASCAR Cup Series race in Las Vegas in 1998.

“We’re borrowing a page out of the book of Jack Nicklaus and his Memorial Tournament conducted each spring outside Columbus, Ohio,” said LVMS President Chris Powell.  “Each year, the Memorial honors a past great from the game of golf.  By honoring a stellar performer from yesteryear in NASCAR, we can give a new generation of race fans an appreciation for those who helped shape the sport.  And in so doing, we’ll allow the older fan an opportunity to relive some of the outstanding accomplishments in our sport’s illustrious history.”

In addition to winning the inaugural Cup race at LVMS, Martin’s four Xfinity Series victories at LVMS are still the most in speedway history. Martin recorded 40 NASCAR Cup Series triumphs in his career to go along with 49 victories in the Xfinity Series.

More details and appearance schedules for the Speedway Legends program will be announced as the 2022 South Point 400 approaches.   Tangent to LVMS’s Speedway Legends program is its sponsorship of the Scene Vault Podcast, a weekly podcast that focuses on NASCAR history and the people who were crucial to the sport’s growth.  Podcast creator Rick Houston is scheduled to be on hand each year during the South Point 400 to interview various “history makers” in NASCAR.

Family-run, fine-dining Ferraro’s Italian Restaurant & Wine Bar has welcomed its third generation of chefs to the kitchen. Nico Ferraro, 11-year-old grandson of Owner Gino Ferraro and son of Executive Chef Mimmo Ferraro, has signaled his interest in carrying on the family’s culinary tradition by learning to prepare the family’s authentic, signature recipes.

Nico first learned to cook at home, then began shadowing Mimmo at Ferraro’s since late 2020. Today, he can be spotted in the kitchen or strolling through the restaurant and graciously greeting guests. Nico has not only been learning the family’s treasured recipes from his father and grandfather, such as Pappardelle Mimmo, Spaghetti Aglio e Olio, Lasagna alla Gino, and Osso Buco, but also seeing firsthand how demanding the restaurant business can be.

“Having a work-life balance in the restaurant industry is notoriously difficult,” says Mimmo. “Being able to work surrounded by your family is a tremendous gift. Family means everything to us.”

Other Ferraro’s family members continue to frequent the restaurant most nights of the week. Gino’s wife of 47 years, Rosalba, can be seen socializing with guests almost nightly, and their other children, children’s spouses, grandchildren, and extended family also stop by regularly.

“Nothing brings me greater joy than to have my family an ongoing part of the Ferraro’s experience,” said Gino Ferraro,. “It’s beyond incredible to see Nico developing a passion for Italian cooking, just like his father and grandfather!” For more information about Ferraro’s or to make reservations, call (702) 364-5300,

This distinctly dazzling, novel and memorable experience takes guests on a pedal-powered, four-mile journey astride a colorfully illuminated rail bike. In addition, guests are encouraged to bring their best blacklight attire and glow sticks. A quad bike for four starts at $169, with a tandem for two starts at $90.. As of this writing tours take place Monday through Friday at 8:30 p.m. and at 9:30 p.m. Saturday and Sunday,  Book online today at www.railexplorers.net, or by phone at (877) 833-8588.

Guests pedal the Rail Explorers rail bikes four miles downhill from the Nevada State Railroad Museum to the Railroad Pass picnic area, where they may relax in the signature red Adirondack chairs. Each experience concludes with a ride aboard a historic train back to the tour’s starting point.  Located in historic Boulder City just minutes from the Las Vegas Strip en route to Hoover Dam—Rail Explorers offers exhilarating, guided excursions in two- or four-seat rail bikes along the same tracks used during construction of the dam.
Rail Explorers Las Vegas tours include four memorable summer options, including the Morning Desert Ramble, the Southwest Ramble, the Sunset Railbike Ride and The Neon Lights Night Tour. All rides start at the Nevada State Railroad Museum and continue downhill to Railroad Pass. Each tour also includes a nostalgic ride back to the top of the hill in one of the museum’s historic trains, along with free museum entry. Knowledgeable guides lead every Rail Explorers tour, ensuring guests enjoy not only the majestic desert scenery, but also learn fascinating insights along the way. Rail bikes provide a truly distinctive way to explore this extraordinarily scenic and historic area.