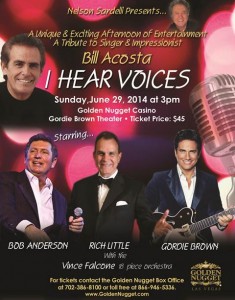 After months of hard work and planning, “I Hear Voices, A Tribute to Bill Acosta,” has been completed, and the event is ready to go on Sunday, June 29, at 3:00 p.m., at the Golden Nugget, downtown.

Nelson Sardelli, who has produced a number of very successful fund raisers and tribute shows over his long career as an entertainer, has once again jumped into battle stance for a great cause, and signed on as the producer of the show.  He obtained the services of three of the best impressionists in the business, Gordie Brown, Rich Little and Bob Anderson, to headline the production. And he got the Golden Nugget to allow use of the Gordie Brown Theater for the event.

Singer/impressionist, Bill Acosta, has been performing in and around Las Vegas since the late ’70s. A lot of us (reporters, columnists, etc) first heard him when he was singing, in his own voice, on The Barge at Caesars Palace.

Bill returned now and then from his home in Chicago, but always as a singer. But, when he returned to Las Vegas in 1999, it was as the star of a revue at the Luxor, produced by his wife, Jeanne Bavaro. Two years later, Acosta and company moved into the showroom at the Flamingo, where they stayed for a year. Bill and Jeanne decided it was better financially to go back on the road, and to do their show in Las Vegas on a semi-monthly basis at various local casinos. The rest is showbiz history.

However, a few years ago, Bill started having medical problems and was diagnosed with Parkinson’s disease. I was fortunate enough to be present at his final show at the South Point Hotel & Casino a few years ago. At the time I had no idea it would be his last show ever, but it was! As a result, in spite of some major surgeries, he is no longer able to perform, and is currently facing additional medical challenges. I was at his home, along with his ex-wife, Jeanne, when he was brought home after one of those surgeries. It had somewhat helped his tremors ease up, and his speaking voice was much improved. Wow, I thought that was terrific, as did everyone else who surrounded him during those trying times. Bill Acosta is one of the nicest, sweetest persons you will ever meet. He has a great bunch of friends who keep him smiling, and his family is always at his side.

This show is to honor Bill and to assist with some of the very costly medical expenses. If you are unable to attend, “I Hear Voices,” in person, but would like to help, you can still support the cause by sending a donation, made payable to: William Acosta, and mail it to 3801 Fairway Circle, Las Vegas NV. 89108-1106. Incidentally, not a single person or entity – not the acts, not the musicians, not the hotel’s technicians and stage crew – is getting paid for this act of love. The Golden Nugget’s management has gone out of their way to support the efforts and this project. Your generosity and assistance will be is deeply appreciated. “I Hear Voices,”is sure to leave a lasting impression on all who see it.

Theo Von will be headlining this coming week at the Laugh Factory inside the Tropicana Hotel, along with Zan Aufderheide and Danny Villapando. Von is the host of TBS’s hidden camera show, “Deal with It,” from the creative mind of executive-producer, Howie Mandel, which is in its second season, and is currently airing on Wednesdays at 10:30pm.

Von is also wrapping up a 2 ½ – year job as the host of Yahoo!’s popular daily recap show, “Primetime in No Time,” one of the most-watched shows on the web, with nearly one million views per day. As a stand-up performer, Von had the highest rated half-hour special on Comedy Central, in all of 2012. Furthermore, he is a contributing writer for Laughspin.com, and the genius behind, CrankTexts.com, a website where Von texts random numbers and gets into conversations with total strangers. He has garnered numerous accolades for his many TV appearances, was voted “Fan Favorite” as a semi-finalist on “Last Comic Standing,” and was the winner of Comedy Central’s “Reality Bites Back.”

Having just made her national radio and television debuts, Zan Aufderheide is a hot up-and-comer in the comedy scene who tours in clubs all over the country. She has been heard on the nationally syndicated, “Bob & Tom Show,” and does weekly call-ins to radio stations all over America with her “Moment of Zan” segment. All of her material is clean, autobiographical and funny; the only complaint audiences ever have is that they want more Zan.

Danny Villalpando has been performing stand-up for over sixteen years, and his comedy has taken him to over fifteen countries around the world. He worked with the USO, and “Comics on Duty,” to entertain our troops overseas. Villalpando has appeared on Comedy Central, NBC’s “Friday Night” and “Latino Laugh Festival.”

Rick Michel, who has performed and headlined in Las Vegas since 1981, will present his “Sinatra Forever” show, focusing totally on the music of Frank Sinatra, along with his 24-piece orchestra, on Saturday, July 12, in the M Pavilion at the M Resort Spa Casino at 7:30 p.m. Michel will salute and interpret “Ol’ Blue Eyes” standards. Tickets for “Sinatra Forever,” are $19.99, $24.99 and $29.99, plus fees. Tickets can be purchased at the M Resort Box Office, located at Player Services, or by phone at Ticketmaster 800-745-3000, and online at www.ticketmaster.com.

Michel, a master impressionist for more than 40 years,has been touring his, “Sinatra Forever” show around the country, as well as internationally with performances in Canada, Mexico and Chile. More than half the members of his orchestra at the M Pavilion are musicians that once played with Sinatra. They will back Michel in a 23-song set that covers everything from Sinatra’s classics such as, “Witchcraft” to even lesser known hits such as, “I’ve Never Been in Love Before,” from the musical “Guys and Dolls.” Michel has shared the stage with many celebrities including Rich Little, Mickey Rooney, John Byner, and Sherman Hemsley; opened for comics such as Bobby Collins, John Pinette, Rita Rudner,and George Wallace; and performed impersonations for such luminaries as Sinatra, President Gerald Ford, Tony Curtis and Steve Allen. In 1994, Michel shared the spotlight with Little playing Bob Hope to Little’s Bing Crosby, and Jerry Lewis to his Dean Martin. Little called Michel “one of the best impressionists around today.” For Michel, a memorable highlight came when he performed his impression of Hope for the comedic icon himself at the Bob Hope Celebrity Golf Classic in Palm Springs.

Former VP and COO of Dick Foster Productions (DFP), David Gravatt, will now head up his own production company, Epic Creative Solutions (ECS),and will expand on producing and directing musical production shows, and developing new theatrical endeavors for the casino environment. In addition, DFP has assigned its Rio Secco T-Mate program to ECS, and also plans to enter into co-productions with Gravatt’s company for both United States and overseas presentations. Gravatt has worked with his mentor Dick Foster for nearly 30 years. Starting as a singer, dancer and musician performing on USO tours, in theme parks for Kings Productions, and other shows, Gravatt’s life was changed when he auditioned and worked for Foster’s first edition of his “Spellbound”show, produced in Philadelphia. After the show closed, Foster saw the young man’s potential and offered him the opportunity to move to Los Angeles and work on ice-skater, Dorothy Hamill’s, production show at the Universal Amphitheater.  David hesitated because he had an upcoming modeling gig, and Foster said to him, “I’m not offering you a gig, I’m offering you a career.” Gravatt thought about it overnight, took the job and never looked back. “It was amazing,” said Gravatt. “Dick and his wife and business partner Lynne took me under their wings. It was a family environment with the offices connected to their home and I lived with them. It turned out to be the opportunity of a lifetime.”

Now, while Foster is downsizing his company to take on new projects and to consult, it is Gravatt’s turn to upsize. “The difference in some ways I’ll be working for David rather than him working or me,” commented Foster. “Now we’re both being freed up for different reasons.” Epic Creative Productions is located at 2830 S. Jones Blvd., Suite 1, Las, Vegas, NV 89146, phone 702-387-0900, and email: [email protected].

For years, magician George Kresge from North Caldwell, New Jersey, also known as the Amazing Kreskin, has been performing his “thought reading” show around the world. He is famous for aggressively shaking a person’s hand when greeting them, and for performing his night club act as a thought reader. Las Vegas headliner, Gerry McCambridge, also known as, “The Mentalist” says when it comes to generating publicity for himself, Kreskin’s name should be the Amazing Liar. Kreskin always seems to surface in the media claiming his “personal powers” could be used in some unusual way. “Kreskin has as much power in him as a dead 9 volt battery” Gerry claims. “Someone needs to expose Kreskin’s self-proclaimed mental powers as nothing more than a cheap way of trying to generate publicity for himself, and his dying performing career” continued McCambridge.

Kreskin’s latest attempt at publicity was publicly released on June 13, 1014, when Kreskin claimed his phone was “ringing off the hook with requests,” to find the money millionaire Jason Busi is hiding during his cross country scavenger hunt. Kreskin assured Busi, in the release, he would not tell anyone where the money was hidden, as if Kreskin actually knew. Kreskin then challenges Jason to attend one of his performances, and hide a $25,000 check in the audience. And with his powers, Kreskin will find the check. “This is a tame attempt at publicity by the not so amazing one” claims McCambridge. “In the past Kreskin claimed he could use his powers to predict political voting results, as well as help the government with terrorists” says McCambridge. “I will hide a $100,000 check somewhere in Las Vegas, and give Kreskin 24 hours to find it. If he can use his mental powers to find it, he can keep the money, or donate it to charity. If he fails to find it, he will retire from performing and stop issuing press releases with frivolous claims. I will be the only one who knows the location of the hidden check” McCambridge said. “Kreskin should have followed his friend, Johnny Carson, into retirement many years ago” he added. McCambridge currently headlines at the V Theater in Planet Hollywood.

For more information about McCambridge go to www.mentalist.com., and to speak directly with Gerry regarding his challenge, contact: Grace Fulljames at (702) 423-1003 or [email protected].

Well, gang, that’s about it for this short week.