I first met a gentleman by the name of Jack Jones back around 1968, when I was Director of Publicity at the now long-gone Thunderbird Hotel. He was to be our headliner in the showroom, thus it was my chore to stage a Media/VIP party for him, and to make sure the world knew he was at our hotel.

I remember how easy he was to work with. Whatever I asked of him he said, “Let’s do it!” If memory serves me, his two weeks (we did two shows a night in those days) were two of our best for the hotel. Then in 1983, I had been employed by Robert Goulet during his first run at the old Dunes Hotel in 1982, and continued to work for Goulet off and on for the next 25 years. But, this time, we were closing out another highly successful run at the Dunes, and guess who was following us in? You got it, Jack Jones! The two singers were great friends, and one thing Robert loved to do was to tease his buddies. So, on closing night we posted a whole bunch of Robert Goulet photos, business cards, and other stuff all over the green room and the dressing room. I do know Jack called Robert screaming at him (it was a joking response of course).

And over the years I’ve caught his shows at various venues in our little village, and have always been fantastically entertained by a warm, funny and wonderful singer of old songs, great songs, and new songs. I call him the “Song Guy.”

Did you know that his father, Allan Jones, was a well-known singer and actor in the mid ‘30s and ‘40s? They called guys like his father “Matinee Idols” in those days. One of Allan’s big hits (and I mean huge) was “Donkey Serenade,” recorded in 1937. I think that’s where he gets the good looks, and beautiful hair. He definitely inherited the right vocal chords, that’s for sure! And here is a little known fact: In 1959 his father was booked into the Thunderbird Hotel on the Las Vegas Strip as the headliner. Guess who his opening act was. His son, Jack! Nearly 10 years later Jack was the headliner.

He has had a lot of great reviews, but the one he sorta cherishes best is from The New York Times when they printed a review of one of his shows: “He is arguably the most technically accomplished male pop singer today…..” Oh, did I mention that he was the voice behind the song for the T.V. show “The Love Boat?”

Jack has been honored with two Grammy Awards, a star on the Hollywood Walk of Fame, the Golden Palm, and the Palm Springs Walk of Fame to mention just a few of his many awards and honors gained over a lifetime of great works. He has a ton of wonderful recordings and just recently released, what I believe is one of his top five best albums, “Seriously Frank” (celebrating the 100th Birthday of Frank Sinatra), orchestra arranged and conducted by Patrick Williams, with Dave Grusin on piano. The record was subsequently followed-up with a tour in Los Angeles and the United Kingdom in 2016. And, now, he will be at the Smith Center performing in the fabulous Cabaret Jazz room this coming Monday and Tuesday (Oct 17-18).

All I can tell ya, is this guy can sing his butt off. You will hear a gamut of music from his early days right up to today, and of course a few of from Sinatra. I plan on being there that’s for sure!

Bill Engvall rides into town during PBR Finals week to perform at the Treasure Island Theater Friday, November 4, at 9:00 p.m.  Thirty years and nine comedy albums into his career, Engvall remains one of the top comedians in the country. His family-oriented stand-up show still connects with audiences of any age by finding humor in everyday situations.

In 2000, Engvall collaborated with Jeff Foxworthy, Ron White and Larry the Cable Guy on the “Blue Collar Comedy Tour.” The quartet toured together for six years, producing three live DVDs, a television series “Blue Collar TV” and launching “Blue Collar Radio.” The live soundtrack was nominated for a Grammy Award and the tour specials remain some of the most watched in Comedy Central history.

Recently, Engvall filmed a new comedy special “Just Sell Him for Parts.” He also competed alongside his family on “Celebrity Family Feud” and was eaten by a shark on cult favorite “Sharknado 3: Oh Hell No!” Engvall called on his love for football for his role as the coach in “Catching Faith,” guest starred on “Last Man Standing” with Tim Allen and played games with Jane Lynch on “Celebrity Game Night.” Engvall was a finalist on season 17 of ABC’S “Dancing With the Stars,” finishing in the top four of the competition.
Tickets are available starting at $59.95, plus taxes and service charges, and can be purchased by calling 866-712-9308 or 702-894-7722, or visiting www.treasureisland.com.

Pink is the word! Hard Rock Cafe Las Vegas Strip will once again team up with music legend and Flamingo Las Vegas headliner, Olivia Newton-John, to “make strides” against breast cancer with a special brunch on Sunday, Oct. 23 from noon – 2 p.m.  Newton-John will be joined by acclaimed singer/songwriter and bandmate Steve Real for an exclusive performance, and guests will enjoy additional performances by Chadwick Johnson and Melody Sweets with an appearance by the Chippendales.

Tickets for the “Turn up the Pink” bottomless champagne brunch are $75 each and on sale now by calling Lisa Hendrixson at 702-650-8590 or visiting ticketweb.com online. Through Hard Rock’s recently launched Hard Rock Heals Foundation, proceeds from the brunch will benefit Making Strides Las Vegas. As part of the event, Hard Rock Cafe Las Vegas Strip and Olivia Newton-John will host a group of survivors from Making Strides. The North Las Vegas Fire Department will park a pink firetruck on The Strip in front of Hard Rock Cafe all day.  The firefighters will encourage supporters and survivors to stop by and sign the truck. Proceeds from the fire department’s custom BCA T-shirts will also support Making Strides.  Newton-John isn’t just surviving – she is thriving – and excited to share her story and message of hope with these other strong women. Newton-John makes strides in her community of Las Vegas and in her homeland of Australia, where she helped build the Olivia Newton-John Cancer Wellness & Research Centre (onjcancercentre.org). The Centre provides a comprehensive range of services and facilities for cancer treatment, education, training and research as well as a dedicated wellness center. 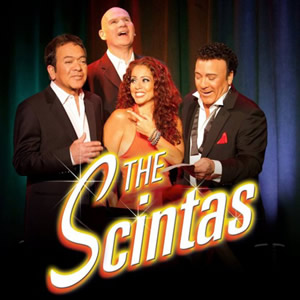 “So many shows come and go in Las Vegas,” said Jonathan Jossel, CEO of the Plaza Hotel & Casino. “We are proud to have the Scintas call the Plaza home. Our guests love the Scintas’ brilliant mix of music and comedy. Their show has become a hallmark of the Plaza and makes for an unforgettable night downtown – dinner at Oscar’s steakhouse followed by a classic Las Vegas show experience with the Scintas.”

“We are happy to start the New Year off at the place we call home, the legendary Plaza Hotel,” added Frankie Scinta.

The Scintas, brothers Frankie and Joe and “honorary Scintas” Peter O’Donnell and Janien Valentine bring refreshing wit and endless talent to the highly regarded show. Having performed for hundreds of thousands of people, the Scintas have become a fixture in Las Vegas for nearly two decades with their signature comedy, musical prowess, and knack for spot-on impressions. The show spans several generations, blending music of all styles with relatable humor that leaves the audience feeling like they’re hanging out with family.

Ticket prices for the New Year’s Eve show and all shows in 2017 start at $29 for general admission. VIP tickets offering guests preferred seating and an autographed photo are $49. A special “dinner and a show” package also is available for $99 per ticket and includes a three-course prix fix dinner at Oscar’s Steakhouse in addition to a VIP show ticket. Prices do not include taxes and fees. Tickets are available online at www.plazahotelcasino.com or by calling 702-386-2507.

Well, gang, that’s about it for this week. Be sure to get your tickets for Jack Jones as they usually go fast.