The Laugh Factory located on the mezzanine level of the New Tropicana Hotel will be filled with laughter when three of the best comedians hit the stage, with headliner Jamie Kennedy leading the laughter in this special engagement for this weekend, along with Flip Schultz, and Kristy McHugh hosting.

When Kennedy first arrived in Los Angeles he became a professional Hollywood extra. After a few years of struggling, Kennedy was unable to find an agent and ended up working as a host at Red Lobster. He decided to become his own agent and created a false persona, screen agent “Marty Power”, to attract the attention of real agents and managers over the phone, who would later book his performances, and it worked. Kennedy came to prominence in the late 1990s for playing Randy Meeks in the “Scream” film series.  His lead role as Tim Avery in “Son of the Mask” earned him a Golden Raspberry Award nomination for Worst Actor. He formed a production company called Wannabe Producers, alongside Josh Etting, through which he has produced the following: “The Jamie Kennedy Experiment,” “Blowin’ Up,” “The Starlet,” and “Living with Fran,” created by David Garrett. Following “Malibu’s Most Wanted,” in which he both wrote and starred.

Kennedy lent his voice to the videogame “ESPN NFL 2K5” as a celebrity adversary with his own football team, the Upper Darby Cheesesteaks. Jamie is also unlockable as a free agent tight end in season mode. Kennedy also wrote an autobiography entitled, Wannabe: A Hollywood Experiment. The book chronicles his life in Hollywood as he attempts to become a star.

A performer of stand-up comedy, Kennedy is also known for his sketch performances on his television reality show, The Jamie Kennedy Experiment, which became the WB Networks’s highest-ranking new show in 2002.  In 2008, Kennedy released the documentary “Heckler,” about the plight of stand-up comics versus their often-aggressive audiences. From 2008-2010, he played psychology professor Eli James in the CBS drama Ghost Whisperer. From 2009-2013, Jamie was in the TV series, The Cleveland Show, playing Roberta Tubbs’ boyfriend. His film “Lost & Found in Armenia,” in which he plays an American tourist who ends up in an Armenian village, accused of being a Turkish spy, later opened to select theatres on June 7, 2013. His film, “Buddy Hutchins,” in which Kennedy plays a down-on-his-luck recovering alcoholic, was released in 2015. he also starred as Travis Welker in “Tremors 5,” and as Rob in “Rivers 9.” 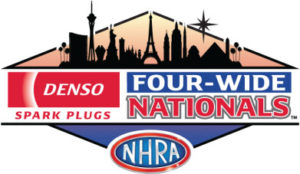 During the 2017 season the Speedway announced that they would be reconstructing The Strip and its track during the off-season to host a four-wide race. This is the first four lane track west of the Mississippi river and first on the 2018 Mello Yello Drag Racing Series schedule. Drivers will have stage against an extra two drivers and will have to remember which light theirs is.

The top eight Pro Stock racers will compete for $50,000 on Saturday, April 7th, in the K&N Horsepower Challenge. The lucrative event is a special race-within-a-race bonus event highlighting the top seven Pro Stock drivers who have accumulated the most qualifying points during NHRA Mello Yello Drag Racing Series events. An eighth driver is decided by a special fan vote on the K&N website. Greg Anderson, defending and six-time event winner, returns to Las Vegas to add another victory to his already impressive resume.

The start of the new Mello Yello Drag Racing Season brings the promise of new beginnings and another season of fast-paced competition. The first few races of the season also allow teams to show off new paint schemes on their machines. Not only are the racecars sporting new paint, but many of the team haulers will also sport new looks for the season.

Every ticket purchased is a pit pass and will allow fans the opportunity to see the new looks up close and personal.

Catering to their growing fanbase, healthy casual eatery Portion Control will bring its guilt-free gourmet menu to Henderson with the grand opening of its second location on Saturday, March 31.

“We are changing the way people view health food,” said Blum. “Eating healthy is more than following a diet, it’s about making a positive lifestyle change, but that doesn’t mean you have to sacrifice the food you enjoy. We’re thrilled to bring Portion Control to Henderson and continue to make Las Vegas a healthier place to live.”

“Our second Portion Control location is truly a testament to the Las Vegas community and their continued support of the restaurant,” said Natalee Upperman. “Even more, it’s a testament to the fact that locals and travelers alike are pursuing happier, healthier lifestyles and it’s amazing to be a part of that.”

Located inside suite 150 at 2560 St. Rose Parkway, Portion Control Henderson will be open Monday through Saturday from 8 a.m. to 8 p.m. and Sunday from 10 a.m. to 4 p.m. For more information on Portion Control or to view the menu, visit portioncontrolnv.com.

The Orleans Hotel and Casino invites guests to put their virtual reality (VR) skills to the test in the property’s all-new “Virtual Zone.” The Virtual Zone is IGT’s VR platform for the casino environment that enables players to compete in spirited VR tournaments and enjoy competitive VR games. This debut at The Orleans marks Boyd Gaming’s first VR entertainment offering and IGT’s first VR installation on a casino floor.

Located adjacent to Bailiwick American pub and eatery, The Virtual Zone offers two feature tournament-compatible archery games, SiegeVR™ and ArcheryVR™. Both games are competition-driven virtual reality experiences that leverage HTC Vive VR technology to transport players to a competitive virtual world where they engage in a bow-and-arrow battle to defend a castle from oncoming aggressors. Player scoring is based on the number of targets hit.

“IGT’s Virtual Zone and the unique content and tournament technology that supports it, delivers an entertainment experience unlike anything previously offered on casino floors,” said Nick Khin, IGT Chief Commercial Officer, Gaming. “The SiegeVR and ArcheryVR games afford players at The Orleans a competitive VR experience that accommodates skilled and novice players alike and rewards the top-performing participants.”

Virtual Zone games can be played Monday through Friday from 4 p.m. to 10 p.m. and on Saturday and Sunday from 2 p.m. to 10 p.m. The game schedule follows: Archery: Monday, Wednesday, and Friday, with Siege: Tuesday, Thursday, Saturday, and Sunday

For more information on the Virtual Zone at The Orleans including its official rules, please visit: https://www.orleanscasino.com/events/the-orleans-virtual-zone.

The Salvation Army Southern Nevada Women’s Auxiliary cordially invites the Las Vegas community to celebrate the changing of the seasons, while raising money for a great cause. Enjoy a time of food and fashion at the 53rd Annual Spring Fashion Show and Luncheon on Saturday, April 28, inside the Mardi Gras Room at the Orleans Hotel & Casino.

This event has become a favorite of supporters of The Salvation Army in Clark County. Doors open, and shopping begins at 10:00 a.m., with the luncheon and fashion show beginning at Noon. Tickets are $45 per person, with tables of 10 available for $450 each. For more information, to donate clothing for the sale or to RSVP for the 53rd Annual Spring Fashion Show and Luncheon, please call 702-256-5408. RSVPs must be received by Friday, April 13.

The Salvation Army Southern Nevada Women’s Auxiliary has a membership of more than 150 ladies dedicated to supporting The Salvation Army’s mission of serving those in need without discrimination through a variety of social service programs. This is accomplished through the Auxiliary’s function as a fundraising and volunteer organization with a heart for the people served. They meet monthly on first Mondays where they plan the execution of a calendar of annual events and in-kind donations to benefit the life-transforming programs and services of The Salvation Army Southern Nevada. Among those are the After School Program, Christmas Angel Program, Homeless Day Resource Center, Family Services, Homeless Outreach Services, Human Trafficking Victim Services, Veterans’ Services and Vocational Training Programs. For more information on The Salvation Army and the Women’s Auxiliary, please visit SalvationArmySouthernNevada.org or follow on Twitter @SalArmySONV.

Well, gang, that’s it for another week.