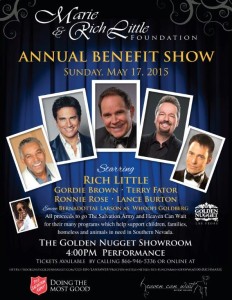 Starring an unbelievable lineup of entertainers, including Rich Little, singer, comedian and celebrity impressionist Terry Fator, impressionist Gordie Brown, magician Lance Burton, singer Ronnie Rose and Bernadottae Larson as Whoopi Goldberg, with all proceeds benefiting The Salvation Army and Heaven Can Wait, for their many programs which help support children, families, homeless, and animals in need in Southern Nevada.

A master mimic of more than 200 voices, Little continues to impress with a touring schedule throughout the United States and Canada. U.S. Presidents: John F. Kennedy, Lyndon Johnson, Richard Nixon, Gerald Ford, Jimmy Carter, Ronald Reagan, Bill Clinton, both George Bushes and Barack Obama have watched him do his thing. Rich has a voice for every administration. Infamous for his skewering of political figures, Little has charmed, amused, intrigued and gotten the best of politicians from here to his native Canada. He entertained at both of Reagan’s presidential inaugurations and got to know the Reagans very well during that time. President Reagan used to tell Little, “You do me better than I do.”

A professed classic movie buff, he’s particularly fond of doing Jimmy Stewart, Jack Lemmon, John Wayne, and Humphrey Bogart, but Little has also latched on to baby boomer-friendly characters, such as Paul Lynde, Kermit the Frog, Andy Rooney, and Dr. Phil, to name a few. Some of his favorite current impressions are of stars Arnold Schwarzenegger, Sylvester Stallone, Jack Nicholson, and Clint Eastwood. “They’re easy to do,” he says. “They are larger than life.”

Still in his early 20s, Little was discovered while working in the United States. His friend, singer Mel Torme, then on the musical team of CBS network’s The Judy Garland Show, asked him to make a tape. Instead of the usual impressions, Little did voices nobody did, including Alfred Hitchcock, Orson Welles and Dennis Weaver. Garland thought it was great, particularly his James Mason, and Little was signed to the show. Appearances on TV variety shows starring Ed Sullivan, Jackie Gleason, Glen Campbell and Dean Martin followed, as well as on series such as Laugh-In, The John Davidson Summer Show and as a regular on The Julie Andrews Show. Little also had his own variety show in the 70s and was the star of the TV show KopyKats. Little was a guest host early on for The Tonight Show, hosting 12 times. He quickly became a household name sitting in one of the Hollywood Squares and went on to do The Muppet Show.

Named “Comedy Star of the Year” by the American Guild of Variety Artists, Little was the perpetrator of nine comedy albums and three HBO comedy specials, as well as the Emmy-award winning specials Rich Little’s Christmas Carol with “W.C. Fields” as Scrooge, “Humphrey Bogart” as one of the ghosts and “Paul Lynde” as Bob Cratchit.

In June 1998, Little’s star was added to the Canadian Walk of Fame to go along with his current stars on the Hollywood Walk of Fame, Palms Springs Walk of Fame and Las Vegas Walk of Fame; one of the few, if not the only celebrity to achieve all four. In 2003, Little wrote a one-man play entitled, Jimmy Stewart and Friends in honor of this beloved actor and dear friend.  The story of Stewart’s amazing big screen career, his military record and his family life, including many celebrity impersonations, was met with rave reviews during a decade of touring at performing arts centers.  He’s hoping to have it made into a television special in the near future.

A little known fact about Little is his other talent as an artist.  He started sketching when he was young, drawing his family and friends.  To date, he has drawn around 100 pictures of all the celebrities and politicians he imitates, and portrays several of these life-like charcoal sketches in his shows.

Tickets are $27.50 plus tax and applicable fees and can be purchased online at www.goldennugget.com or by phone at 866-946-5336. Guests under 21 years must be accompanied by an adult.

Boyd Gaming is producing a new, fun and interactive rodeo event for the sport’s loyal fans and popular competitors — The Cinch Boyd Gaming Chute-Out.  On December 10, 11 and 12, the Cinch Boyd Gaming-Chute Out will make its inaugural debut at the Orleans Arena at The Orleans Hotel and Casino in Las Vegas. Boyd Gaming has teamed up with the event’s title sponsor, Cinch Jeans, to offer rodeo fans around the country “A New Way To Rodeo.” For the first time ever, rodeo fans will enjoy a new twist in this innovative competition, pitting popular rodeo competitors against one another in three days of action-packed performances. Fans will have the opportunity interact with the competitors and the rodeo in a new and innovative way. This event is designed to entertain serious and casual rodeo fans alike.

“Our Company’s founder, Bill Boyd, championed the Wrangler National Finals Rodeo move to Las Vegas back in 1985, and we continue our commitment to the success of the WNFR and the fans of western lifestyle entertainment,” Chris Gibase, Chief Marketing Officer of Boyd Gaming, said. “More than 100,000 loyal fans of western lifestyle events and entertainment make an annual trek to Las Vegas each December to see the top 15 riders, ropers and bulldoggers compete in the pinnacle of rodeo events: the WNFR.”

Gibase continued: “Las Vegas Events and the PRCA produce great events to entertain all those that visit in December. The Boyd Gaming Chute-Out enhances the experience for fans that travel to Las Vegas with what they love, top-quality rodeo action.  CINCH’s Boyd Gaming Chute-Out provides unbeatable action at a family-friendly price.”  The Chute-Out will begin at 2 p.m. each day, and will be emceed by Hall of Fame’s own Bob Tallman and celebrated rodeo announcer Roger Mooney. The competition purse totals more than $200,000 and competitors will include former and future champions that are not participating in this year’s WNFR event.

The Chute-Out event format is new and tailored to add a bit more Las Vegas-style entertainment, while maintaining the long rich history and rodeo tradition. The timing of the event allows all fans to have a full day of rodeo action — CINCH’s Boyd Gaming Chute-Out in the afternoon, followed by the WNFR in the evening. Boyd Gaming has been one of the largest supporters of rodeo around the country, both as a national sponsor of the PRCA and the largest ticket purchaser for WNFR in Las Vegas.  Boyd Gaming is also known for its line-up of western lifestyle events before and after the WNFR, including the National Finals Tonight Show and Gary Leffew’s Legendary Buck’N Ball. Starting in December 2015, these mainstay events will be relocated to The Orleans Hotel and Casino to accommodate growing and vibrant crowds.

Other anticipated events returning to Boyd Gaming properties include the Bob Tallman Celebrity Bowling Tournament at the Gold Coast Hotel and Casino and Roxy’s Buckin’ Bull Honky Tonk at Sam’s Town Hotel and Gambling Hall.  Tickets for the event start at $20, and go on sale on Friday, May 15 at noon PDT. Tickets will be available for purchase at BoydGamingEvents.com, by calling 702.284.7777 or visiting any Boyd Gaming box office location. Room and ticket packages will be available for purchase on June 1 at Boyd Gaming Nevada properties.

Joe Spinella known as the “Tenor of Illusions,” and listed as “one of the five greatest breed of new tenors in the United States” stars onstage as, Pavarotti re-born, in a new original show spectacle he created.  “IllusionAria” by Spinella is a razzle-dazzle collection of startling illusions, musical joy, and cliff-hanger story telling that is now ready-for-Vegas.  An orchestral powerhouse backs this never-seen-before balance of Fantasy Performance. It’s magic-to-music and has been honed to perfection after limited shows in Florida; promise to continue the genius of David Copperfield and the showbiz sizzle of Lady Gaga.  “Lady Gaga raised the bar for me when she said, “We need Fantasy to survive because reality is too difficult,” Spinella said.” At six years old, he was on his way! Training to be a magician thanks to his Dad, a visionary on his own, popularity at college, and parties prepared him for future prestigious performances.

With a degree from Manhattan School of Music in New York, he has been the titular Director/Conductor of Music for the Sarasota Mandolin Orchestra since 2009, soloist for the prestigious Zubin Mehta in Israel.   Joe catapults from legendary Italian Opera to pure Grammy nominated “Pop” and “Popera,” with Lady Gaga’s premiere songwriter/producer Joe Vulpis.  Spinella pledges to conquer new frontiers in the entertainment world. “IllusionAria” goes light years beyond the doves-from-hat of the past, as it travels full-cast and costumes, into the realms of mystery, music and magic for a thrilling and total entertainment theatrical package.  Spiritually buoyant, Spinella’s fabulous voice added to his being named Musical Director, Cantor and Conductor for Temple Beth Israel as well as the Longboat Island Chapel for the past decade in Florida.  Today, Las Vegas looms as the Promised Land for Joe Spinella.