The Mint 400 off-road race, held just outside Las Vegas, concluded last Saturday evening with a tremendous last minute pass by Las Vegas resident, and second generation off-roader, Rob MacCachren taking home the overall victory, after 15 attempts at the coveted checkered flag. Rob had won everything else there was to win, but the Mint title had beaten him every time. But not anymore.  His Ford Trick Truck was honed in for the roughest course in off-road, while his BF Goodrich tires held air for all three laps (no flats).  The winning margin was .44 seconds over Jason Voss of Cupertino, Ca.  Andy McMillin, of San Diego, was leading the final lap when he had a flat about 30 miles from the finish line and finished third.

Now It’s time for the Boy’s (and Gal) of Thunder to take over the village as NASCAR hits town for the Kobalt 400 and the Boyd Gaming 300 at the Las Vegas Motor Speedway this weekend, and downtown Las Vegas with RaceJam at the 3rd Street Stage on Saturday.

This weekend will see eight NASCAR drivers looking to double down at Las Vegas Motor Speedway. Las Vegas native Kyle Busch is among those running in both Saturday’s Boyd Gaming 300 NASCAR Xfinity Series race and Sunday’s Kobalt 400 Monster Energy NASCAR Cup Series. Busch, the 2015 Monster Energy NASCAR Cup Series champion, is the defending champion of the Boyd Gaming 300 and led 38 laps in last year’s Kobalt 400 before finishing fourth. His brother, Kurt, will be competing for this second win of the 2017 season, having just won the Daytona 500.

Defending Kobalt 400 Champion Brad Keselowski will drive the No. 2 Miller Lite Ford in the Kobalt 400 and the No. 22 Ford for the Boyd Gaming 300, while 2016 Xfinity Series Champion Daniel Suarez will be in the No. 20 Toyota on Saturday and the No. 19 Arris Toyota on Sunday. Brothers Austin Dillon (No. 2 Saturday, No. 3 Sunday) and Ty Dillon (No. 3 Saturday, No. 13 Sunday) will give Chevrolet four chances to visit victory lane over the weekend.  Joey Logano will drive the No. 12 Ford in the Boyd Gaming 300 before switching to the No. 22 Pennzoil Ford for the Kobalt 400, while Kyle Larson will pilot the No. 42 Chevrolet on both days and Aric Almirola (No. 88 Ford Saturday, No. 43 Ford Sunday) is also competing in both races this weekend.

There has been a lot of discussion about the traffic situation for this weekend, since work continues on portions of the I-15 leading into the speedway. Las Vegas Motor Speedway officials are confident in the track’s traffic plan for this year’s 2017 NASCAR Weekend. Two decades of experience working with state, county and local representatives have helped the speedway formulate a comprehensive and fluid traffic plan that continues to evolve. Utilizing multiple entrances and exits, combined with experienced staff and area law enforcement, LVMS expects smooth vehicle flow for the 2017 event weekend.

Speedway officials urge fans to head to the track early and to utilize mass transportation options to and from the track each day. With construction on Interstate 15 and Las Vegas Boulevard currently under way, race officials are asking fans to allow extra time and show patience entering and exiting the track each day.  The RaceDay Express shuttle bus service – which debuted at the 2015 NHRA Toyota Nationals – will expand its presence and deliver more fans to LVMS than ever before. With more than 100,000 avid NASCAR fans expected in and out of the 1.5-mile superspeedway for the Kobalt 400, utilization of mass transportation like RaceDay Express and Maverick Helicopters will be key. RaceDay Express will be operated by Alan Waxler Group, which has serviced many major events in Las Vegas including the Electric Daisy Carnival.

“We are looking forward to another great NASCAR Weekend at LVMS, and we’re ready to welcome a big crowd to our 1.5-mile speedway,” LVMS President Chris Powell said. “We’ve worked diligently with area officials and the Nevada Department of Transportation to put together a traffic plan that will work best for everyone involved, and we’re confident we will maximize the assets available to us during our special weekend. We urge fans to arrive early and be patient while leaving, and we anticipate another outstanding three days of NASCAR excitement at LVMS.”

For fans driving their own vehicles to the speedway, options such as the Lucky 7 Preferred Lot, which will have two dedicated exit lanes following the races on Saturday and Sunday, are encouraged. LVMS would like to remind fans that the speedway’s extensive on-site shuttle system will begin running 45 minutes after the conclusion of Saturday’s and Sunday’s races due to heavy foot traffic leaving the grandstand areas.  Traffic updates will be provided on Sunday, March 12, via the LVMS Twitter feed (@lvmotorspeedway) and on the radio at KBAD AM-920.

Multiple platinum-selling rock band Night Ranger will perform the national anthem at Las Vegas Motor Speedway prior to the Kobalt 400 on Sunday, March 12.

With more than 17 million albums sold worldwide, more than 3,000 live shows performed and more than one billion in radio audience, Night Ranger has both epitomized and transcended the arena rock sound and style of that era and beyond. With songs that have significantly impacted popular culture and continue to expand its ever-growing fan-base, Night Ranger is proof that powerful songs, plus accomplished musicians are the perfect formula for continued success.

Night Ranger has earned widespread acclaim, multi-platinum and gold album status while leaving its indelible mark on the music charts with a string of best-selling albums (“Dawn Patrol,” “Midnight Madness,” “7 Wishes,” “Big Life” and “Man in Motion”), and its popularity was fueled by an impressive string of instantly recognizable hits such as “Sister Christian,” “Don’t Tell Me You Love Me,” “When You Close Your Eyes” the anthem-style “(You Can Still) Rock In America,” along with “Sentimental Street,” “Goodbye,” “Sing Me Away,” “Four in the Morning” and more.

Night Ranger will perform at the 14th annual RaceJam 2017 at the Fremont Street Experience’s 3rd Street Stage in downtown Las Vegas on Saturday, March 11, with special guest Survivor before singing the anthem at LVMS. RaceJam is free and open to the public.

Following its opening night at Hard Rock Hotel & Casino on Saturday, March 11, Raiding the Rock Vault will also take the speedway stage for pre-race entertainment on Sunday, March 12. Raiding the Rock Vault is the ultimate rock concert experience, featuring some of rock’s most experienced and celebrated stars, including Rock and Roll Hall of Famer Howard Leese of Heart. Raiding the Rock Vault will perform inside Vinyl at the Hard Rock Hotel & Casino Saturday to Wednesday at 8:30 p.m. beginning on March 11. Raiding the Rock Vault was voted as the readers’ choice for “Best Musical” in 2014 and 2015 and “Best Tribute Show” in 2016 in the Las Vegas Review-Journal’s Best of Las Vegas Awards, and has consistently been ranked as the No. 1 performance in Las Vegas on TripAdvisor. The show tells the story of classic rock from the 1960s to the 1980s and is performed by members of some of the greatest rock bands in history including Phil Soussan, bass (Ozzy Osbourne, Billy Idol), Doug Aldrich, guitar (Whitesnake, Dio), Paul Shortino, lead vocals (Rough Cutt, Quiet Riot), Hugh McDonald, bass (Bon Jovi) and Tracii Guns, guitar (Guns N’ Roses, L.A. Guns).

Kobalt 400 pre-race festivities will also include a United States Air Force flyover featuring a pair of F-15s and two F-22 Raptors, as well as driver introductions and the Monster Energy NASCAR Cup Series drivers’ meeting in the Neon Garage at 10:30 a.m. Pacific Time. The Neon Garage in the superspeedway’s infield opens at 7 a.m. 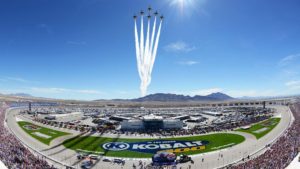 In addition, U.S. Sen. Dean Heller (R-Nev.) will drive the pace car for the Kobalt 400. Heller, the former Nevada Secretary of State, sponsors and supports LVMS’ Senator’s Cup Fall Classic at The Bullring, which is scheduled for Oct. 20-21.

Rock and Roll Hall of Fame member John Fogerty will serve as grand marshal for the 2017 Kobalt 400 at Las Vegas Motor Speedway.

Fogerty, a Songwriters Hall of Fame inductee and leader of Creedence Clearwater Revival, will make the call for drivers to start their engines before the 267-lap Monster Energy NASCAR Cup Series race on Sunday, March 12. Best known for smash hits like “Proud Mary,” “Fortunate Son,” “Centerfield” and “Down on the Corner,” Fogerty will be in Las Vegas to perform his acclaimed show, “John Fogerty: Fortunate Son in Concert” at Wynn Las Vegas’ Encore Theater March 3-11 and May 19-28.

“Headed out after my shows at the Wynn to NASCAR. Rock and Roll and fast cars… ain’t nothin’ better,” says Fogerty.

Fogerty’s shows at Wynn Las Vegas will include performances of his iconic music and chronicle his more than 50-year career as an elite musician. Tickets and VIP packages are available through the Wynn Las Vegas Box Office at 702-770-9966 or at www.WynnLasVegas.com.

For tickets to all events, or for RaceDay Express and Neon Garage passes, Lucky 7 parking permits or driver introduction passes, call 1-800-644-4444 or log on to www.LVMS.com.

Well, gang, after this week I think I’ll take a break.