Another week of fantastic auto racing kicks off this Friday at the The Strip at the Las Vegas Motor Speedway, where the ground shaking boys and girls of the National Hot Rod Association (NHRA), gather for the SummitRacing.com, to compete in the Nationals for the NHRA Mello Yello Drag Racing Series this weekend. Qualifying for the NHRA national event will take place on Friday and Saturday, with final eliminations on Sunday. Featured classes include: Top Fuel Dragster, Funny Car and Pro Stock. Children under 12 will be admitted free when accompanied by an adult.

The race weekend will kick off on Thursday with a free NHRA driver autograph session at the New York New York Hotel & Casino from 6-8 p.m. The first 200 fans in line will receive a free Summit Racing hat.

One of the drivers heavily involved is a five-time world champion, Jeg Coughlin Jr., who already has a long-running love affair with The Strip and it’s one he plans on continuing this weekend, when he’ll attempt to win two more times in his JEGS.com/Mopar Dodge Avenger. Coughlin teamed with reigning world champion, Allen Johnson, in the off-season to give Mopar a two-pronged attack in the cutthroat Pro Stock category. Using J&J Racing horsepower, Coughlin reset both ends of his career-best numbers at the last NHRA race in Florida, when he posted a 6.487-second run at 213.23 mph.

“It’s exciting to roll through the gates and know you have a great car, and a real chance of winning the race every weekend,” Coughlin said. “The challenge for the whole team now is to keep the momentum of this hot start going and carry it forward.” Aside from the usual Las Vegas national event trophy, one he’s claimed on five occasions in the past (2000, 2001, 2002, 2008 and 2009), Coughlin also will be contesting the crown of the K&N Horsepower Challenge. The special race-within-a-race, invites the top seven drivers from the last 12 months, plus a wildcard entry voted in by the fans, to race for a $50,000 first prize.

Now, as to the female side of the picture, there is a wonderful contender that is looking forward to hitting the fast ¼ mile strip. With a little bit of luck, and a lot of strategy, Alexis DeJoria and her Kalitta Motorsports Tequila Patrón Toyota Camry Funny Car team are looking to win big in Las Vegas. Prior to packing up and heading out West for this weekend’s 14th annual Summitracing.com NHRA Nationals, Team Patrón stayed an extra day in Gainesville, Fla., following the conclusion of the Gatornationals, making numerous successful and informative test runs.

The team, now in its sophomore year, has seen a consistent progression of improvement over the first three races of the 2013 NHRA Mello Yello Drag Racing series, achieving two significant milestones— securing their first round win, and running their first 4.0 [4.085-seconds, elapsed time] in competition during the 2013 season—at their most recent race in Gainesville last month.

Under the direction of veteran crew chief Tommy DeLago, Team Patrón is hoping to continue to build upon that momentum this weekend, and has high hopes of winning the Wally (the NHRA trophy named after its founder that is given to winners in the various classes of competition) in Las Vegas, the headquarters of their primary sponsor, The Patrón Spirits Company.

When the teams leave Las Vegas Sunday evening, the standings could look a lot different in almost every class. As an example, Shawn Langdon enters the Summitracing.com NHRA Nationals in third place in the NHRA Mello Yello Top Fuel point standings. He trails second-place, Tony Schumacher, by 58 points, and leads fourth-place, Doug Kalitta, by 20 points. What a difference a year makes.  One year ago, the Al-Anabi Racing Team entered the fourth race of the season with Langdon in fifth place, and his teammate, Khalid alBalooshi, in 11th place in the Top Fuel point standings.  This season, Langdon enters the fourth race of the season in third place with alBalooshi currently fifth.

The Al-Anabi Racing Team won races at Las Vegas in 2010 and ’11, but team manager Alan Johnson, and both Al-Anabi crew chiefs, were also a part of Las Vegas race wins in 2004, ’05, ’06 and ’08.  One year ago at Las Vegas, Langdon was the No. 5 qualifier but lost to, Antron Brown, in the first round of eliminations.             With Langdon’s win in the O’Reilly Auto Parts Winternationals in Pomona, Calif., he has qualified for the Traxxas Shootout.  The second-year special event for eight Top Fuel teams and eight Funny Car teams is set for Indianapolis during the U.S. Nationals on Labor Day weekend.

An event for a very worthy cause will be taking place next weekend. The 8th annual Las Vegas Cadillac Through the Years, returns to Town Square Las Vegas, April 13 & 14, where it is expected that more than 30,000 fans will attend the two-day celebration of the Cadillac “standard of excellence.” There will be all kinds of live entertainment, even a celebrity or two may drop by to surprise everyone. The “Fintastic Fortune” raffle returns, giveaways, food fair vendors, and, of course, more than 100 classic Cadillac beauties will be on display. From original restorations, to extreme modifieds, this year’s show will feature models from its 1903 inception, to the newest 2013 releases. 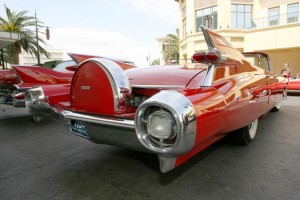 Attendees have the chance at up to $25,000 in prizes and giveaways, by purchasing “Fintastic Fortunes” raffle tickets, available during the event for $2.50 each. “Fintastic Fortunes” tickets are also available for purchase at the Service Center check-out counter inside Findlay Cadillac, Henderson. Proceeds benefit the “Keep Memory Alive Foundation,” a non-profit charity that supports the Cleveland Clinic Lou Ruvo Center for Brain Health in Las Vegas.

The dynamic “Caddy” extravaganza will feature some spectacular one-of-a-kind models, with exhibitors traveling from as far away as New Jersey to participate. Admirers can preview a 1940 Cadillac Series 75 Fleetwood, built for esteemed Hollywood billionaire Howard Hughes; a 1948 series 62 Saoutchik Cabriolet (one of only two produced), with a price tag of $3 million, a 1903 Cadillac Runabout, built in the first year of Cadillac production; a 1954 Fleetwood Limousine used by Marilyn Monroe during the filming of the movie “Bus Stop,” and much more.

“We have put together the show of a lifetime this year. It will be bigger and better than ever,” Colin Christie, president of Las Vegas Cadillac LaSalle Club, said. “This year’s show will be a Cadillac cultural experience of epic proportions to appeal to Cadillac enthusiasts of all kinds.”

It’s all in a day’s work for the people of Las Vegas’ Binion’s Gambling Hall in the new Cineflix series, “Casino Confidential.” The series goes behind the scenes of the historic casino, following the Binion’s team as they navigate the high-octane world of our little village, helping give customers the times of their lives, while making sure no one gets out of hand.  The staff at Binion’s keeps the casino under control in a city that thrives on tourism, money, and partying. In the Entertainment Capital of the World, anything can happen, and “Casino Confidential” is there to capture all the action. In each episode, viewers meet the people of Binion’s who spend their days and nights working in the legendary casino.  From handling celebrity appearances, including our very own, Mayor Oscar Goodman on his last day in office, to managing high rollers and keeping out-of-control bachelor and bachelorette parties in check. The men and women of Binion’s do it all. Emotions run high as the drama unfolds, keeping the security teams, and casino staff and management on their toes day and night. “Casino Confidential” will air two 30-minute episodes every Thursday, starting April 4th at 6 p.m. on the TLC Channel.

Whoopi Goldberg, who has been delighting audiences since the age of eight, will return to Treasure Island, Friday, April 5 at 9 p.m. Goldberg began her career working in theater and creating characters that became “The Spook Show,” and evolved into the hit Broadway show, Grammy® Award-winning album, and HBO special, that helped launch her career. During her Broadway show, Goldberg grabbed the attention of Steven Spielberg who cast her in “The Color Purple,” her first big-screen role. The rest is what makes the history of showbiz so interesting. Since then, she has starred in many other films including “Ghost,” “How Stella Got Her Groove Back,”and “Girl, Interrupted.” Whoopi will portray Calliope in the upcoming movie, “Black Dog, Red Dog.”

Goldberg has appeared in a variety of television programs and hosted the Academy Awards®. She currently serves as one of the moderators of “The View” on ABC. Tickets are available starting at $69.95, plus tax and handling fees, and can be purchased by calling the Treasure Island box office at 866-712-9308 or 702-894-7722. Purchases can also be made on-line at www.treasureisland.com.

Well, gang, see ya at The Strip over the weekend.