Last week was one of those rare weeks, where I was the recipient of a public relations campaign for a fantastic program: “Operation Recognition!” Now you probably haven’t heard much about this program, as the local newspapers do not seem to cover veteran projects very often. I hadn’t heard of it myself, until I returned from the Honor Flight to Washington D.C. last year. Let me explain it as best I can. Then I will print a copy of the story about me published by the Los Angeles Times and the San Diego Tribune newspapers.

I am a veteran of the Korean War, enlisting in the United States Air Force in April, 1950 at the urging of a Juvenile Court Judge in San Diego. At the time, I had just turned 17 (Feb 14th) and had 30 days to join some branch of the military. So, in June the Korean War breaks out, and I’m just getting out of boot camp. So, I never graduated from San Diego High School.  Never gave it much thought either to be honest. After being discharged in December, 1953, I enrolled at San Diego Junior College (using my GED test). Never gave the diploma thing any more thought. My kids, Robin, Denise, and Lisa, all got theirs. But not me!

Well at a re-union of the Honor Flight, where 28 of our 29 flight members attended, and which is held about 30 days after every flight, a lady by the name of Charm McElree stood before us and asked a simple question: “How many of you veterans never received your high school diploma?” There were about four or five of us—including me who raised their hand. Long story short, Charm sent me an application, I filled it out and sent it back to her along with a bio, and some photos. She then sent it to Nicole Shina of the Office of Education for San Diego County. Within a couple of weeks, I was talking to Ms. Shina and she was asking if I would be willing to come to San Diego to personally receive my diploma? “Of course, I would,” I said. So, she and Ms. McElree, began working on the plans to get me to San Diego. After the holidays, it was decided that the next Board Meeting to be held on Feb. 8th would be the perfect one for the event. I agreed, and my companion, Cathy, began to make the reservations, and planning our trip: Vegas to San Diego.

We arrived on Tuesday the 7th after a pleasant five-hour drive in her Chevrolet SUV. That afternoon a photographer from the San Diego Tribune met us at our hotel and took photos of yours truly for about 15 minutes. I had previously talked on the phone with a reporter from the San Diego Tribune. Well, to cut to the chase and get her story in here, I just want to let you know what happened the next day, Wednesday, Feb. 8, 2017. 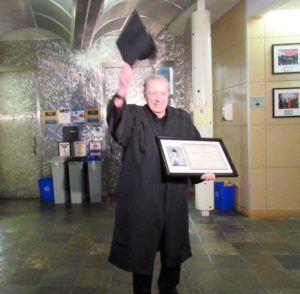 They had a robe and cap for me and I finally got to throw it in the air–just like graduates always do! It felt good.

First off I had a TV interview with TV 10 (ABC) that afternoon at the quad. We were next driven to the local PBS station, by publicist Stacy Brandt, where we did an hour interview. Brandt said that a couple TV stations may cover the meeting that evening where I would get my diploma.  Well, gang, there are six major TV stations in San Diego, and all six were there to interview me, as well as reporter, Maureen Magee of the Tribune and Times. And Charm had flown down with her sister to be there too (that was a neat surprise).

Now here is the story as published in the Los Angeles Times and San Diego Tribune by Ms. Magee: 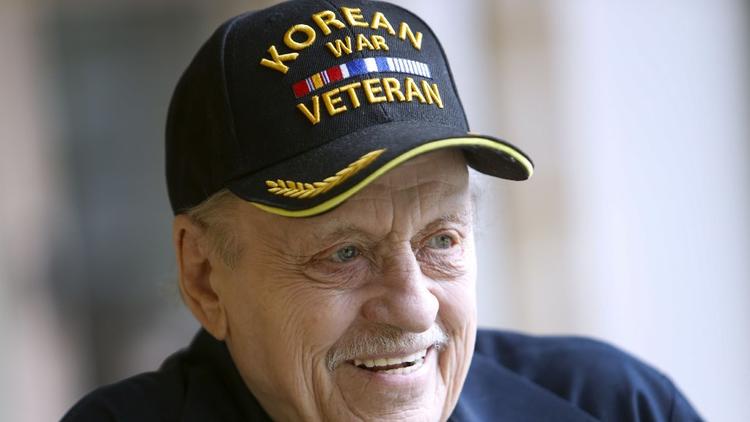 It’s been 67 years since a judge told Norm Johnson to enlist in the military or face juvenile detention for repeatedly ditching class. He took the first choice and lived a storied life. Now he’s getting that diploma. (San Diego Union-Tribune)

The judge’s ultimatum came 67 years ago: Enlist in the military or face juvenile detention for repeatedly skipping classes at San Diego High School.

Norm Johnson gladly joined the U.S. Air Force in April 1950. Even after he was deployed to Asia to fight in the Korean War, Johnson was sure he wouldn’t miss San Diego — save for the sports and judo lessons, which the slight 17-year-old took at his father’s urging.

The ensuing decades were a blur of unbelievable jobs and encounters with dignitaries and celebrities —  bodyguard to Gen. Douglas MacArthur, backup dancer to Elvis Presley in “Jailhouse Rock” and racing cars with James Dean, among them — that Johnson chalks up to smarts, luck and timing.

After amassing personal experiences that could rival Tom Hanks’ character Forrest Gump in the 1994 film, Johnson will receive what he describes as an important accolade Wednesday when he gets an honorary diploma from the San Diego County Office of Education and Operation Recognition Veterans Diploma Project.

Why after all those years, all those experiences, does that sheepskin matter to Johnson?

“I was surprised that it actually does matter to me this much,” said Johnson, 83. “It will legitimize my life.”

While stationed in Tokyo, Johnson said, he was assigned as one of 16 elite bodyguards to MacArthur after a colonel learned of his black belts.

“He would speak to us, but nothing personal,” Johnson said of the five-star general who ultimately was fired by President Truman. “We were like Secret Service, hidden in a crowd because he wanted to be seen. He felt Japanese people needed to know Gen. MacArthur was not afraid.”

Both Presley and Dean were “cool,” Johnson said. “Elvis liked to talk about judo. We talked a lot.”

Johnson went on to study journalism at San Diego Junior College, now San Diego City College, before getting a job covering sports for the Alhambra Post-Advocate in Los Angeles County. He was nominated for a Pulitzer Prize for his accidental coverage of the 1965 Watts riot after giving a friend from the Los Angeles Police Department a ride from Dodger Stadium “to a developing disturbance.”

“We got there and a crowd was surrounding this telephone booth, where a reporter from UPI was trying to call in a story,” Johnson said. “I was getting glass removed from my face when I called in my story from a gurney.” He remembers the opening line of the piece: “I drove through hell last night.”

Johnson has taken photos with President Carter, British Prime Minister Margret Thatcher and Cassius Clay before he changed his name to Muhammad Ali.

Now, nearly 70 years after he bolted from San Diego High, he is set to receive a diploma from the San Diego County school board during a makeshift commencement ceremony.

“This program was designed to honor people whose education was disrupted by war. This really shows you how important that high school diploma is to people,” said Nicole Shina, who oversees Operation Recognition for the county Office of Education. “Norm is a perfect example. He led this colorful life — not everyone can say they met James Dean and Elvis Presley — but this still means so much to him.” 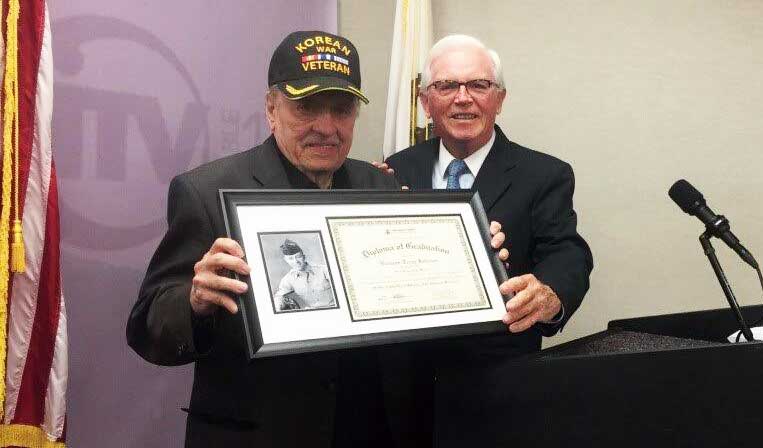 President of the San Diego Board of Education, Rick Shea, presents Norm Johnson with his long-overdue high school diploma.

Well, gang, all I can say is that diploma that I never gave much thought to over those 67 years, when it was presented to me by the President of the Board I had some tears welling up in my tired blue eyes.

It’s honestly hard to explain the sense of what it felt like at the moment. So, I explained it as best I could: “If you know how you felt when you fell in love then you know how hard it is to describe that feeling…that’s how I feel right now!”

1 thought on “After a War and 67 Years, Norm Johnson Receives His High School Diploma”