Medal of Honor recipient, Sgt. Dakota Meyer, is headed to Las Vegas, NV to race in “The Great American Off-Road Race,” the world famous Mint 400 on March 14th, with the Roberts Racing Team. Dakota will be piloting the Roberts Racing #1588 Class One Car. Dakota earned his Medal of Honor during the battle of Ganjgal in Afghanistan, where under fire he saved the lives of his fellow soldiers and civilians in an extraordinary act of bravery. The Medal of Honor is the United States of America’s highest military honor, awarded for personal acts of valor above and beyond the call of duty. The medal is awarded by the President of the United States in the name of the U.S. Congress to U.S. military personnel only.

“The Mint 400 is more than a race; it’s a demonstration of American ingenuity and resolve. The idea that we never quit is an inherent American trait that is upheld at its highest level by our veterans. That trait is also an inherent in off-road racing, we never quit. We are honored to have Dakota Meyer and all the other veterans who come to compete in one of iconic races in off-road. They have offered the greatest sacrifice in protecting our way of life,” Matt Martelli, Mint 400 CEO, said. 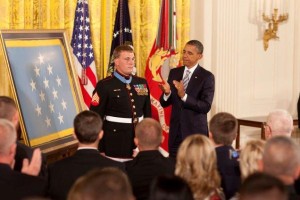 “I am excited to race The Mint 400, and help raise awareness at the plight of our veterans. I want to demonstrate that we are in fact not done with living life to its fullest. Twenty two veterans a day commit suicide, this is a tragedy we all need to work together to stop. I was nearly a statistic but now I am example of how to push on and live,” Dakota Meyer said.

The Mint 400 is proud to celebrate American Veterans by supporting the following foundations:

Dondino is a non-conformist; he plays and sings with humor and compassion! And, to top it all off, Dondino surrounds himself with a group of great musicians. As a special treat the man, who never ages, will be showing his exceptional talent at the Italian American Club, 2333 E. Sahara Ave, this coming Saturday (Feb. 28), with show time set for 8:00 p.m.

A newspaper poll conducted by Narter Marketing produced this astonishing information: The highest count reported by a couple who saw him perform over 2,700 times in showrooms and benefits throughout Nevada. The most touching was the young man from Special Olympics who saw 10 shows. Today Dondino is in the “Ripley’s Believe It or Not” museum in Branson, MO., as the “Most Seen Entertainer”

Most of Dondino’s career has been shaped by his involvement in humanitarian and civic responsibility. He has been featured on the MDA Telethon, Variety, the Children’s Charity of Iowa, Special Olympics, Nite of the Stars at Caesar’s Palace, St. Jude’s Ranch for Children, The National Aids Concert in Palm Springs, and many other charity benefits, including his own foundation “Read to Me Foundation.” The impact of the international singing sensation has been felt across the nation and around the world for over thirty years. Born in Italy and raised in Brooklyn, NY, he first set foot on stage at the age of 13. For the first decade of his professional career Dondino traveled the world, electrifying audiences with his concerts and nightclub act. His tightly choreographed, lush orchestrated shows mixed original work with old standards, into a dazzling display of showmanship. He was a must see show in Las Vegas, when he headlined at the Four Queens Hotel in downtown Las Vegas for more than 14 years.

Few performers can entertain audiences of all ages, races, and genders, but Dondino consistently continues to do just that. Performing in many entertainment venues, he has received rave reviews both locally, nationally and internationally, For more information or tickets, priced at $25.00, call 702-457-3866

The immensely popular NASCAR Hauler Parade, which signals the start of NASCAR Weekend at Las Vegas Motor Speedway, will return to its traditional Thursday date this year, March 5.  Approximately 50 bright and colorful NASCAR haulers will roll through the vibrant lights of the world-famous Las Vegas Strip on the evening of March 5 starting at 6 p.m. The parade route will stretch for nearly five miles, beginning at the historic “Welcome to Las Vegas” sign, and heading north on Las Vegas Boulevard before ending at Sahara Avenue, where the haulers will jump onto Interstate 15 and head for the Las Vegas Motor Speedway. The parade, which is free of charge, will be visible for race fans on both sides of the Strip and from any of the hotels and casinos along Las Vegas Boulevard. 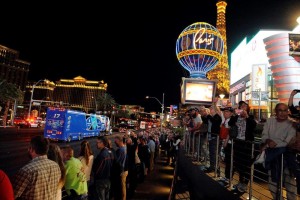 The superspeedway’s NASCAR weekend will begin with Stratosphere Pole Day on Friday, March 6 – highlighted by NASCAR Sprint Cup Series qualifying at 4:45 p.m. The Xfinity Series Boyd Gaming 300 will be the featured event on Saturday, March 7 at 1 p.m., while the NASCAR Sprint Cup Series Kobalt 400 caps off the weekend on Sunday, March 8 at 12:30 p.m. The extended race weekend begins on Wednesday, March 4 with two nights of World of Outlaws Sprint Cars on Las Vegas Motor Speedway’s half-mile dirt oval.  Tickets for NASCAR Weekend are on sale at www.lvms.com or by calling (800) 644-4444. Neon Garage passes, Lucky 7 preferred parking, and driver introduction passes also are available. Follow LVMS on Facebook, Twitter and Instagram at /lvmotorspeedway. 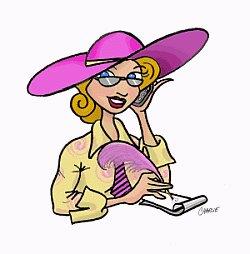 After many, many years, one of this writer’s favorite reporters is hanging up the old Royal typewriter, and heading for the couch, where she can watch television, and throw her soft slippers at some of the stupid things she sees on the old tube. However, I have been assured by my friend of more than 25 years that she will be keeping her eyes open, and her ears close to the ground, and may just jump back into the fray from time-to-time with a special column. This is what she posted at her column site last week, and with her permission I am running it this week:

A semi-farewell to the troops.

After doing this for more than 10 years, next Friday, February 27th, will be the last of our weekly Claire Voyant columns. Cousin Claire is tired.

Before we go, we have some (more) things we want to say.

First and foremost, a great big THANK YOU to Frank Sener and Gene Balmain, the two gentlemen behind Charleston Communications, and the folks that brings you Claire Voyant and a wealth of other information about our exciting city. We much appreciate both gentlemen for allowing us to run uncensored, and for trusting us to do so.

An extra big thanks to Frank, for his patience when columns were late (almost every week), and for taking his valuable time to correct typos and/or mistakes that we noticed after we have pushed the Send button.

And thank you, too, to the working people who realized that Cousin Claire needed timely, accurate, correctly spelled, information in order to properly promote their shows, projects and businesses.

Our policy has been not to mention, by name, the handful of no-talent, phonies, egomaniacs, con-artists, liars and thieves, or the snobby businesses that have managed to get a foothold in the community, at least for a while. Most of them eventually get caught, and hopefully move on to other parts of the world.

We have tried to make the public aware of the talented and good people in the entertainment world, primarily in the Southern Nevada community, and to ignore that and those that didn’t meet our standards. Our thinking is, if we wouldn’t spend our own hard-earned money on it, we didn’t want to suggest that readers do so either. The biggest compliments we have gotten over the years, come from people who tell us, at the end of a wonderful performance, “We would not have known about this event if we hadn’t read about it in Claire Voyant’s column.” You’re most welcome.

Over the past decade, the opinions expressed in this column are those of the writer,
and do not necessarily reflect those of the staff and management.