Went to the Golden Nugget Sunday afternoon to cover a tribute show for a close friend, Bill Acosta, as a reporter and to attend as a paying guest. As a member of the media we are privileged to attend most events free of charge. However, when it’s a benefit or tribute, most of us in the media do pay to go or we don’t go. It really just depends on who is being honored. 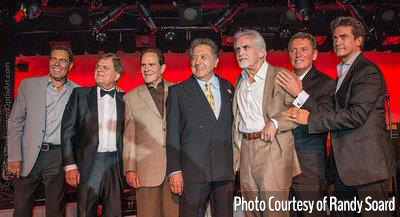 With that out of the way, what I witnessed Sunday afternoon, was a wonderfully produced event by a great entertainer himself, Nelson Sardelli. I’m calling it the “Million Dollar Show,” because to get the top impressionists in the country:  Rich Little, Bob Anderson, and Gordie Brown, along with Sardelli on one stage, at the same time, and then toss in the big orchestra conducted by Vince Falcone, it would be practically impossible to say the least. And, that is exactly what Sardelli did, and what a show it was!

Nelson kicked it off with a short welcoming speech, and then he introduced Gordie as the first act. After all, we were sitting in the Gordie Brown Showroom at the Nugget (everyone from the janitor to the orchestra were either working free or being covered by the Golden Nugget), and what a job he did. Brown who works in his room Tuesday through Sunday (he’s dark beginning Friday through the 19th.) is without question the modern Bill Acosta, Little and Anderson, all in one package, in that he works quick, and his impressions are terrific, and right on the spot.

After nearly 40 minutes, it was Rich Little’s turn to honor Acosta who was sitting front row center in the audience. And, what hasn’t been written and said about this Legend, I need not repeat. Needless to say Little was at his best this day. He also took a moment to honor his buddy, Steve Rossi, who had passed away a few days earlier. Rich is not a singer, but he sang Rossi’s favorite song, “More,” at the close of his 40 minutes.

It too was a moment this writer will not forget. Bob Anderson closed the show with a fantastic 40 minutes of great musical impressions, and a perfect song for the moment, when he sat at the piano with Falcone and sang, “Some Other Time.” Just Bob and Vinnie. It was perfection!

And then all four of the guys, along with Clint Holmes who was in the audience along with a bunch of other entertainers, got Bill on stage and the show ended.

I have no idea how many were in the paying audience (I estimate there had to be about 250 to 300 who paid the $45.00 per ticket). The show was just perfect from start to finish. Sardelli is the ultimate tribute producer in Las Vegas, and his plate is always full. Every penny of that $45 bucks goes to the honoree. That’s the way it should be!

This week the Laugh Factory, inside the Tropicana Hotel & Casino, has Erik Rivera headlining along with Sam Fedele, and host Kristi McHugh through Sunday, July 6. Show times are 8:30 and 10:30 p.m.

The name of Erik Rivera has become synonymous with comedy. His boy-next-door good looks and unique perspective have made him one of New York’s fastest rising comedians, and a favorite act at comedy clubs and colleges throughout the country. Rivera is known for his quick wit, commanding stage presence, charisma and infectious smile. He has appeared numerous times on MTV Tr3s, Comedy Central, and most recently on Si TV’s “Latino 101.” Rivera has also appeared in the independent features “My Brother” and “Stand Up,” and wrote and directed his first award-winning short film, “The Cyclist,” last year.

Sam Fedele developed his high-energy style of comedy growing up on the mean streets of New Jersey. Being voted, “High School Class Clown,” was the first step in the development of this live-wire act. Sam spent the next six years honing his skills in the United States Marine Corps. Fedele’s diversified background and high-energy, clean comedy, makes him perfect for any event. He is a comedy club and college favorite nationwide, and can be seen on NBC, Comedy Central, the PAX Network and CBC Television in Canada. Kristi McHugh has appeared in the movies “Deuce Bigalow, Male Gigolo,” and Disney’s “Jack of All Trades.” TV credits include Spike TV’s “I Hate My,” “Millionaire Matchmaker,” and“Scene of the Crime” on TBS. She has been the head writer and principal character in the improv show “The Empire,” which was picked up by Dish, Digital and Punch TV. Tickets are priced at $34.95 and $44.95 plus tax and fees. For reservations call 702-739-2411.