In 1994 Walker Furniture came up with an idea. Management at that time began a small campaign to pick a few local families who needed some help over the Christmas holidays. They would pick a few families who needed some furniture. Names from all over Las Vegas began pouring into the office. That first year Walker selected 12 families to receive a houseful of furniture. Now, 25 years later, Walker Furniture’s “Home For The Holidays” program, which assists individuals and families in need who reside in Clark County, concluded over the weekend with deliveries to 35 residents in need.

“It’s hard to believe we started this program in 1994 with deliveries to 12 families,” said Larry Alterwitz, owner of the furniture store. “As the city has grown, the need has followed and now we’re brightening the season for 35 families with our Home For The Holidays program.”

Partnering again this year with Walker, Helping Hands of Vegas Valley is the preliminary committee reading all the letters. Their expertly trained staff visit and identify the nominated families evaluating the most genuine need. Las Vegas Rescue Mission is supplying food and toys, Star Nursery is providing Christmas trees to the families along with support from other vendors and community entities. 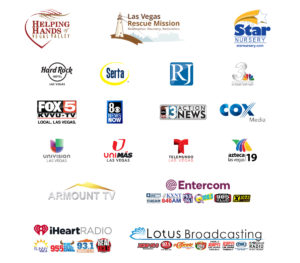 The nominating letters are so important, and it helps to send them early describing a person or family’s particular situation. Anyone in the community can submit a letter including teachers, health care professionals, social service workers, clergy, friends, neighbors, and family members. So, during the year, if you know of a family in need, be sure to send a letter to Walker’s.  They will in turn will forward that letter to Helping Hands.

Letters explain the extraordinary situations in our community, which run the gamut of hardships including: families with children suffering from physical or mental disorders; the loss of homes and belongings from fires; single-parent households with financial difficulty; and families affected by illness, domestic violence or sexual abuse are just some examples.

Many stories are heart-wrenching such as: a single-parent family of five with one child having a brain injury requiring ongoing therapy and the entire family sleeping on the floor; four minor children being raised by grandparents because their mother was shot and killed by their father; and a single working mother of five unable to provide her family with beds, chairs or a dining table.

The following five letters are just an example of those received by the furniture store, and who actually became part of this years “Home for the Holidays” program.

This nomination letter came from Alyson McCarthy, CEO for Ronald McDonald House Las Vegas: Two years ago, 18-year-old Erik Hernandez was walking home with friends after a concert and was hit “twice” by a car and left to die. His father, mother and two younger brothers lived in Ronald McDonald House to remain by Erik’s bedside.  During this time, the father Miguel lost his job and the family their home.  As Erik is slowly improving, Miguel is looking for a job and the family is moving into an apartment where the mom can be a full-time caretaker.  Ronald McDonald House is paying the security deposit and along with other good samaritans are assisting with other needs. Walker Furniture stepped in and happily filled the house with furniture, while Star Nursary will bring in a live tree and monetary donation, and Las Vegas Rescue Mission will round out Christmas cheer with toys and food.

Family member wrote about Jason Johnson, a single father with six kids since the wife/mother left the family last January and doesn’t communicate. Children are: girls – 22 months, four and five; boys – twin 3-year-olds and oldest nine. Johnson had been a stay-at-home father because childcare was so expensive.   He got a job; however, with stores closing he’s now losing his warehouse position. Three years ago, the family lived in a Siegel Suites, which had a bed bug infestation. When they moved, the bugs were in their furniture, which had to be destroyed. Family only has some clothes, a TV, and dishes. The children have no toys, beds, etc. Walker took care of this family.

This LaKinda Washington family lost everything due to domestic violence as well as hurricane Harvey.  Washington and her two children moved to Las Vegas seeking refuge.  They are starting over completely with no furniture. The family is sleeping on an air mattress, which sometimes gives out.  Washington is always helping others even when she is the one needing assistance. The facts of the letter checked out and a houseful of furniture was delivered over the weekend.

Joseph Perry is 33 years old. He went blind shortly after his wife passed away in their home with their 3-year-old child. Perry takes care of his son Maurice now 7-years-old; but he can never work again. Perry living only on Survivor Benefits struggles to provide enough food, proper furniture, clothes, etc., and barely has money for transportation to his doctor appointments, which are required at least three times a week. Perry’s needs are being properly taken care of through Walker’s program with new furniture.

Fire Station 14 adopted this area family, Quy Kim-Tram, who was nominated by the Clark County School District. This mother and four children – 8,10, 14 and 19 – have no furniture, are sleeping on blankets stacked in the corner, and eat on a table top sitting on the floor.  The Fire Dept. will be paying two months rent and a good neighborhood semaritan will be purchasing needed items like linens, etc. The Fire Station is going to bring a truck with items being donated. Wakjer filled the residence with furniture.

The Orleans Hotel and Casino will bring timeless entertainment to The Orleans Showroom in February, including performances by legendary singer-songwriter Neil Sedaka and harmony rock group Little River Band.

Neil Sedaka will appear on Friday, Feb.1 and Saturday, Feb 2. The “King of Song”  Sedaka began his musical career in the 1950s, becoming a renowned singer, songwriter, composer, pianist, and author. Throughout his more than 60-year career, Sedaka has enjoyed enormous success with several chart-topping hits, including “The Diary,” “Calendar Girl,” “Breaking Up is Hard to Do,” “Laughter in the Rain” and many more. Additionally, he has written hit songs for musical icons like Frank Sinatra, Tom Jones, The Monkees and The Fifth Dimension.

Sedaka has written several No. 1 hits throughout the years and was later inducted into the Songwriters’ Hall of Fame in 1984. He has also earned numerous awards and recognitions for his talents, including The Sammy Cahn Lifetime Achievement Award and a star on the Hollywood Walk of Fame. Today, Sedaka continues to perform his celebrated pop hits to audiences at sold out venues across the world.

Appearing one night only on Saturday, Feb. 9, and best known for their top hits “Reminiscing,” “Lonesome Loser” and “The Night Owls,” Little River Band has been winning over fans since they first formed in the ‘70s. Throughout the ‘70s and ‘80s, Little River Band has released several multi-platinum albums and chart-topping hits, including “Take it Easy on Me,” “Help Is on Its Way,” “Happy Anniversary” and “The Other Guy.”

Little River Band’s fame skyrocketed in both Australia and the United States as they sold approximately 30 million albums and music downloads worldwide. The group also became the first band to set a record for releasing Top-10 hits for six consecutive years. In 2004, the band was inducted into the Australian Recording Industry Association Hall of Fame at the 18th Annual ARIA Music Awards. The following year, the Band won the Casino Entertainer of the Year Award at the G2E Gaming Expo in Las Vegas.

The Bullring at Las Vegas Motor Speedway is set for a full season of action-packed racing in 2019.  The 3/8-mile paved oval will host 13 racing weekends throughout the course of the year, with a number of theme nights continuing at the beloved short track. Action kicks off with NASCAR Whelen All-American Series opening night on Saturday, March 9, and runs through Saturday, Nov. 23, when the West Coast Short Track Championships return to Las Vegas.

The track will host a number of theme nights that will include an array of special guests, extra activities, giveaways, and surprises for fans. Fans can enjoy special evenings like the Chris Trickle Classic (June 15) and Pack the Track Night presented by K&N Air Filters (Aug. 31), just to name a few, and more theme nights will be announced in January.

The wildly popular Night of Fire is set for Wednesday, July 3, and Championship Night will be held on Sept. 21. In addition, the SPEARS Southwest Tour Series, SPEARS Modified Series, Late Model Truck Series and Jr. Late Models are all expected to return to The Bullring in 2019.

New for 2019, the Thunder Car class will move to Friday nights for its six-event season, and the NASCAR Modifieds will exclusively run crate 602 engines. Including the Thunder Cars, the track will feature 10 official points-earning classes next year.

The track will take a break after the Night of Fire to avoid the summer heat and will return to action with Back to School Night presented by Whelen Engineering on Aug. 24. The Bullring will also host the Fall Classic, featuring The Open Comp, Oct. 11-12.

All children 12 and under will continue to be granted free admission to The Bullring in 2019 when accompanying a ticketed adult, with the exception of the Night of Fire. LVMS offers discounts to seniors and the military at all events, and tickets will be available for purchase after the first of the year.

Well, gang, another year has slipped right by, and I for one, can’t wait for 2019. Hope you get out and celebrate the New Year coming in, but please don’t drink and drive. Have a designated driver, call a taxi or any other transportation entity. Don’t end up a statistic.