The Laugh Factory, located on the mezzanine level of the New Tropicana Hotel, will be filled with laughter this week, as Adam Ray leads his buddy’s, Mark Serritella and Jack Assadourian Jr., into the New Year’s Eve Celebration for 2017. It should be one heck of a week with these three well known comedians, who have brought their “A” game for the big party on Saturday night, Dec. 31. This is three guys who know how to celebrate, and you will not want to miss them this week.

Adam Ray, a graduate from the acting school at the University of Southern California and who also took a year to study at the British American Drama Academy in London, Ray has been seen guest-starring on “2 Broke Girls,” “Workaholics,” “Arrested Development,” “According to Jim” and Adult Swim’s “NTSF: SD:SUV.” Adam has also written for MTV’s “Punk’d.” Ray can be seen in the comedy “The Heat,” and appears as well on the Comedy Central show “Adam DeVine’s House Party.

Mark Serritella has appeared on “The Joe Rogan Experience,” “Entertainers with Byron Allen,” “Who Wants to Date a Comedian?” Comedy Central’s Open Mic Fight, and the “About Last Night” podcast with Sean Astin.  Serritella was also featured on “The Huffington Post,” the front page of Funny or Die and “Business Weekly” and has been part of the Boston Comedy Festival five times. He has toured all over Europe and the Middle East entertaining the troops and has three CDs that can be heard on Sirius Satellite Radio.

Jack Assadourian Jr., as the son of comedy club owners, Jack essentially grew up in the comedy scene, and over the years made the transition from spectator to on-stage performer. Over the last few years he has delved into the acting and writing world and has moved his way up the ladder to find himself traveling across the country to feature for the likes of Jeff Garcia, Brandon T. Jackson, and Damon Wayans Jr. Today, he can be found headlining in clubs across the country as he continues his journey up the comedy totem pole.

Stephen F. Sorrentino, a good friend of this writer, wrote a very wonderful note to me about the passing of our mutual friend, Carrie Fisher, daughter of the great Debbie Reynolds, and I thought all her friends would love to read it. So here it is just as he sent to me:

The reason you and so many true artists are taking Carrie’s passing so “to Heart” is because she is part of a legacy that is nearly extinct. She might have been the only tie to what is left of the golden age of Hollywood. In today’s world of sensationalism & instant fame, Carrie came from a time where talent, ability, and A community that we Americans considered as our own royalty.

Our Hollywood icons were our royal families. As our original royalty, has largely left us and now what remains is only a few, Carrie fisher was a symbol of carrying the torch. She was honest, talented, insightful, and brilliant and wore the coveted crown of being not only a princess of Hollywood but of our iconic films as well.  She might have been brought into this world as part of American royalty but she also earned her way to becoming royalty herself through her talent and ability and unique approach to life.

As we consider the great abyss of what America has come to except as “show business,” all we can see is a world ruled by reality show stars, statements being made by people with no insight to art or even intellect, yet their words are taken to heart by a large population of Americans.  Those of us with talent, intellect and sensitivity see a large dark hole to which our future seems to be quickly propelling us into.

My heart goes out to my friend Debbie and tell her son Todd and the entire family.

May the force be with us as we try to except what we have been dealt with as our new American royalty….

Tickets are now on sale to see Rock & Roll Hall of Famers Stu Cook, Doug “Cosmo” Clifford and their reborn band Creedence Clearwater Revisited live in concert on Saturday, Feb. 25 at Star of the Desert Arena in Primm. Doors open at 7 p.m. and the concert starts at 8 p.m. Tickets start at $25 with room packages including two concert tickets and a one-night stay at Buffalo Bills are available starting at $120 plus taxes and resort fees. Fans will hear infectious classics from the original Creedence Clearwater Revival playlist including “Have You Ever Seen the Rain,” “Susie Q,” “Lodi,” “Proud Mary,” “Down on The Corner” and “Who’ll Stop the Rain.”

Looking to recreate and capture the soul and spirit of their music, Cook and Clifford brought on lead singer/rhythm guitar player John Tristao, former lead singer for People; guitarist Kurt Griffey, a songwriter, producer, and performer who has toured with musicians including Eagles, Foreigners, and Lynyrd Skynyrd; and multi-instrumentalist Steve Gunner to round out the group.

“We are excited for Creedence Clearwater Revisited to perform their classic rock hits at the Star of the Desert Arena,” Shana Gerety, vice president of marketing at Primm Valley Casino Resorts, said. “Fans who come out to Primm will enjoy a great show while also experiencing all the other amenities we have to offer.”

Rock legends Pat Benatar and Neil Giraldo are returning to Las Vegas for A Very Intimate Acoustic Evening at the Pearl Concert Theater inside Palms Casino Resort on Friday, March 24, 2017 at 8 p.m. Tickets for the all-acoustic show start at $29 plus tax and applicable fees and are on sale now.

Tickets for Pat Benatar & Neil Giraldo: A Very Intimate Acoustic Evening are $29, $69, $89, and $99 plus tax and applicable fees. Doors open at 7 p.m. and guests under 21 must be accompanied by an adult. Tickets can be purchased at the Pearl Concert Theater box office, any Station Casinos Rewards Center or online at Ticketmaster.com. For more information, please visit www.sclv.com/concerts or www.palms.com. Connect with Palms Casino Resort and The Lounge on Twitter @loungeatpalms or @Palms, Instagram @PalmsCasinoResort and Facebook.

Pat Benatar has always been a rule-breaker and a trail-blazer, she remains a bold and distinctive artist both on stage and on record, and now, after more than three decades in rock ‘n’ roll, she’s a bonafide living legend. Pat Benatar & Neil Giraldo: The 35th Anniversary Tour kicks off with “Shadows of The Night,” which was a top ten hit for the couple on the Billboard Mainstream Rock chart in 1982. Other chart entries on the package include her chart-topping classic, “Love Is a Battlefield, ““Invincible,” “Sex as A Weapon,” and perhaps the song for which the couple is best known – “Hit Me With Your Best,” in addition to “All Fired Up,” Shot,” which was a Top-10 hit on the Hot 100 in 1980.

A four-time Grammy winner, Benatar is a classically trained mezzo-soprano. During the 1980s, Pat had two RIAA-certified Multi-Platinum albums, five RIAA-certified Platinum albums, three RIAA-certified Gold albums and 19 Top 40 singles, including the Top 10 hits, “Hit Me With Your Best Shot,” “Love Is a Battlefield,” “We Belong” and “Invincible.” During the early days of MTV Benatar was one of the most heavily played artists on the popular music channel. Her hits continue to be as unforgettable now as they were at the dawn of MTV, when Pat emerged, fearless, fighting and forging a path for other female rock stars around the world.

Neil “Spyder” James Giraldo, has been a professional musician, producer, music arranger, and songwriter for over four decades now, changing the face of the pop charts throughout the 1980s with his collaborator, muse and wife, Pat Benatar. More than just an explosive steel bending guitar player, Giraldo’s innovative vision helped him create the signature Benatar sound, from its inception. 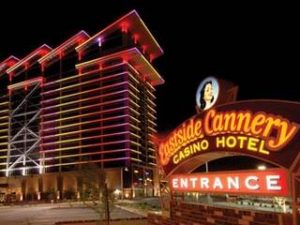 Boyd Gaming has announced that it has completed its acquisition of the Las Vegas assets of Cannery Casino Resorts. The addition of both properties expands Boyd Gaming’s presence to 12 properties in the Southern Nevada, and 24 properties nationwide.

Both properties will remain mostly unchanged for the foreseeable future and current operating hours for each property’s many amenities will remain the same. However, the properties are expected to join Boyd Gaming’s award-winning, nationwide loyalty program – B Connected – in 2017. Cannery Casino Hotel, located on Craig Road, joins the Company as the second Boyd Gaming property in North Las Vegas. The property has an expansive 80,000-square-foot casino and a well-appointed 200-room hotel, plus five restaurants, including Waverly’s Steakhouse and Cannery Row Buffet. The property’s 30,000-square-foot entertainment venue, The Club, is a versatile venue that can expand out to the property’s pool deck and hosts a variety of tribute artists and special events.

Eastside Cannery Casino and Hotel, located next to Sam’s Town Hotel and Gambling Hall on Boulder Highway, expands Boyd Gaming’s presence on the east side of the Las Vegas Valley. With a spacious 64,000-square-foot casino, 300 hotel rooms, and a massive 20,000-square-foot meeting and event space, the property is well positioned for special events like weddings, banquets and more. The property’s Eastside Event Center regularly hosts classic rock favorites, with Vince Neil hosting a New Year’s Eve celebration in just a few weeks.

Well, gang, I hope your Christmas was wonderful, mine was. And, now, we await the year 2017, which will usher in what is expected to be a very unusual year, what with a new President who will take office on Jan. 20. All we can pray for is that Mr. Trump will do all Americans proud.