This Friday, December 16th long-time resident and one of the good guys Gerry McCambridge, also, known as “The Mentalist,” will step onto the V2 Theater stage in the Miracle Mile Shops at Planet Hollywood Resort and Casino, and perform his Las Vegas show for the 3,000th time. Now folks that is a big deal!

When he started this engagement about 10 years ago, dollars were flowing, and then it collapsed. A great number of very good productions didn’t survive the recession. But McCambridge did. How did he do it? Simple: he provided a very entertaining production with a ticket price a person could afford.  Plus, he has a theater owner, David Saxe, who wants all his shows to make money, so he goes out and promotes the hell out of all the shows in his two theaters

“When I came out to visit Las Vegas in 1998, it was the Lance Burton show and the Danny Gans show that caused me to set my sites on being a regular Las Vegas headliner. Lance actually took time to sit with me and give me words of encouragement,” Gerry explains. “Lance told me to watch what I wish for, because your dreams just may come true.”

This reporter first caught his act when he was doing his mentalist thing at the old Stardust Hotel (now long gone). I was really impressed with his performance and wrote about it saying, “this is a show everyone from a small child to the senior citizen can go see and be well entertained. And the ticket won’t break you!” 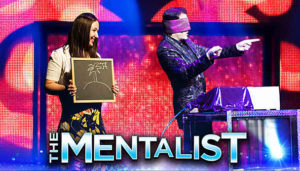 After a few trips, back and forth (he was a working act on the road, and gained national attention in a major TV show, where he was up against similar type of acts), he decided it was time to settle down in one spot. In July 2005 McCambridge signed a three-week contract at the Rampart Casino. That three-week deal ended up lasting for over 47 weeks. That’s when he decided to return to the Las Vegas Strip and the Stardust Hotel. “Moving my show to the strip seems like it was only yesterday, and now I just passed my 11th year headlining in Las Vegas, with 3,000 performances under my belt,” he exclaimed.

“Performing every night in Las Vegas, and spending the days with my six kids, and four grandchildren are exactly what I had wished for. So, Lance was right, I did get exactly what I wanted,” McCambridge smiled. “Dreams can come true!”

New York born and raised, Gerry McCambridge started his future career as a magician at the early age of nine, when he received a magic kit as a gift. From that point on, he pursued his love for magic,  comedy and performing live, eventually defining himself as a “mentalist” — an entertainer who, among other things, show cases his ability to screw with people’s minds.

Gerry starred in an executive-produced “The Mentalist” television show. In 2005 he was awarded “Mentalist of the Year” by the Psychic Entertainers Association. In 2008 he was awarded “Mentalist of the Decade” by the International Magicians Society. In 2014 Gerry received “Best Magic Show” in Las Vegas by the Las Vegas Review Journal’s readers’ poll. In 2014 he finished writing his first book, “Making the Mentalist,” which is his autobiography about being abandoned in an orphanage at birth, and his rise to headliner status.

Macy’s and Make-A-Wish celebrated its ninth annual National Believe Day, with a special wish reveal for a local Las Vegas teen.  Macy’s Believe campaign is a national initiative that raises more than $1 million annually for Make-A-Wish via letters to the Santa campaign.  Our local Make-A-Wish chapter receives tens of thousands of dollars from this initiative every year.

Macy’s Believe campaign invites “Believers” of all ages to bring their letters to Santa to their  local Macy’s store or send online at macys.com/believe. For every letter received now through Dec. 24, Macy’s will donate $1, up to $1 million, to Make-A-Wish. For National Believe Day only, Macy’s offers a double donation – for every letter received in-store and online on Friday, Dec. 9, Macy’s will donate an additional $1 to Make-A-Wish, up to an extra $1 million, above the existing $1 million campaign goal.

New this year, Macy’s is calling on people of all ages to fill the internet with positivity and belief in Santa to keep the magic of the holidays alive. It’s easy to join The Santa Project! Create a message, photo, or video with #SantaProject about why you believe in Santa, and post to Twitter, Facebook, Instagram, or YouTube.

Sixteen-year-old Las Vegas resident, Cece who has been diagnosed with Hodgkin’s Lymphoma, had one wish…to go to Hawaii with her family. Members of the local community gathered for a special surprise event last Friday, Dec.9th, to tell her that her wish has come true!  A 140-member choir joined the group students from Bozarth Elementary who sang “Mele Kalikimaka,” and a special performance from Style Pasifika provided the drummers and hula dancers. Just when Cece thought the performance was over, the choir students raised signs that read, “Your Wish Is Coming True,” and Macy’s associates escorted her through the store for a unique shopping experience for vacation essentials! It was a magical time as she made her grand entrance, where she was escorted by her two Wish Granters, family, and Macy’s associates.  For more information, visit macys.com/believe.

Statesville-based GMS Racing (GMS) announced that, beginning in 2017, the team will compete full-time in the NASCAR XFINITY Series (NXS) with driver Spencer Gallagher. The Las Vegas native will continue to pilot the No. 23, a number that he has raced since 2006 in honor of former NASCAR driver TJ Clark and his son, Spencer Clark.

Gallagher began racing at the age of 12 in Legends Cars at the Las Vegas Bullring to kick off his climb through the racing circuit. Gallagher has been with GMS since 2014, first competing in the ARCA Racing Series and most recently the NCWTS. Over three seasons and 58 starts, Gallagher earned three top-fives, 15 top-10 finishes, and two pole awards.  The 27-year-old made his NXS debut this past season, earning a best finish of eighth place at Daytona International Speedway in July. The team debuted the GMS Chevrolet Camaro at Phoenix International Speedway with a goal of building the program in preparation of running a full-time season in 2017.

The talent of our youth today is undeniable, but how do they take those talents to the next level, grow a fan base, book a concert, launch a career? A program kicked off on December 1, where teen artists and bands are invited to apply for Bringing Down the House, a multi-week program that connects young artists to music industry insiders to build self-confidence, develop new skills, and bring crowds to their feet. Teen artists and bands age 13-19 are encouraged to apply online through Jan. 22.  Applications are reviewed by professional talent buyers from Live Nation, and six lucky applicants will be selected to participate in the workshops and show cases during spring 2017.

“Music Forward has access to some of the greatest minds in the entertainment industry and through Bringing Down the House, we’re able to connect them directly with the next generation of artists,” said Music Forward Executive Director Marjorie Gilberg. “We’re giving our young people a chance to shine, one standing ovation at a time.”

Bringing Down the House is a free program where local artists or bands participate in a series of music industry workshops to learn about music marketing, stage presence, the business of music, and live production.  The participants demonstrate their new knowledge by promoting and performing in a free live music showcase, which will take place at the Las Vegas House of Blues.

More than one hundred artists nationwide have benefited from the Bringing Down the House program: “This summer we got to play the Made in America Festival, curated by Jay-Z, which was cool,” Jason Harris of Red Letter Day, Bringing Down the House Class of 2016, said.  “Bringing Down the House really helped us get there.” The organization is currently recruiting applicants in the following cities: Chicago, Cleveland, Dallas, Houston, Las Vegas, Los Angeles, New Orleans, and Orlando.  To learn more about the program, apply to participate, or sponsor an artist or band, please visit  http://hobmusicforward.org/program/bringing-down-the-house/.

Well, gang, Cox finally got their server fixed, and my email restored after four-day.