Basile, the Greek with a single signature, will bring his special brand of comedy to the Laugh Factory, inside the Tropicana Las Vegas, this coming Monday, June 10 through Sunday June 16.  Appearing as the featured act will be Earl David Reed with Al Caz doing the hosting chores. Showtimes are 8:30 and 10:30 nightly, with a special midnight show every Friday and Saturday, hosted by bad boy Carl LaBove.

Just back from his tour throughout Europe this past Spring, and Australia this past Fall, and now touring North America with his “Dysfunctionally Yours” World Tour, Basile has been busy with his personal appearances and developing programming for cable TV.

Fresh off of filming his new situation comedy TV show for SpiceRack Entertainment, Basile is perhaps one of the most diverse entertainers in the world!  Basile has entertained millions of comedy fans in the United States, Canada, Europe, Australia, and Africa. His unique blend of material, improvisation, and characters has made him one of the most sought-after comedians in the entertainment industry today.

Basile’s diversity in entertainment continues as he stars in his critically acclaimed series, “Growing Up Greek in America.” This comedy series is spoken in Greek and English and to date has sold over a million copies and is distributed worldwide. Basile’s voices and characters have been heard on Armed Forces Radio, Television, and Syndicated Radio as the voice of: “The God Father Of Soul, James Brown“ in North America, and his comedy segments on XM/Sirius Satellite Radio. Basile has over 100 television appearances, including: HBO, Showtime, Comedy Central, A & E, and the Tonight Show on NBC to name a few.

Basile is also known for his voice work as Universal Studio’s Bullwinkle J. Moose, as well as for the Cartoon Network and many Japanese Anime series. He was recently nominated for an EMMY for his work on ESPN’s “30 for 30” series segment, “The Legend of Jimmy the Greek”, as the voice of Jimmy “The Greek” Snyder (Syionidis).

America’s all-time top-selling rock ‘n’ roll band Aerosmith is set to kick off the second leg of their critically acclaimed Las Vegas residency “Aerosmith: Deuces are Wild” on Wednesday, June 19, and to celebrate they are allowing fans access to their museum showcasing incredible items they’ve collected over their nearly 50 years together. Initially only accessible to VIP ticket holders, the exhibit, located in the lower level of Park Theater at Park MGM where the band is performing, is open for tours staring from 12 p.m. on June 19. Tickets can be purchased at https://www.aerosmith.com/vip.

From the moment fans step into the vault, they will feel what it’s like to be on stage with Aerosmith. Fans can walk on the actual stage flooring (also known as the “Marley”) that was used by the band on their previous tours. The exhibit also is a living timeline of their career, featuring everything from Steven Tyler’s high school drum-set, the band’s first press kit, original lyrics for “Walk This Way,” over 20 guitars played during iconic performances, an array of Steven Tyler’s signature scarfs, and some of their most notable awards including one of their GRAMMYs. There are also five giant dynamic original portraits of each band member that were painted by world-renowned performance artist Denny Dent in his “two-fisted art attack” trademark style he also has used in portraits of other rock icons Jimi Hendrix, Bruce Springsteen, and Miles Davis, among others. Each band member also personally contributed items to the exhibit that reflect their mark on this iconic group.

VIP Packages for the museum tour also are still available where, in addition to the museum tour, fans can meet Steven Tyler and Joe Perry and take part in a pre-show Q&A with Joey Kramer, Tom Hamilton, and Brad Whitford.

Other Aerosmith Museum highlights: The renowned “Barn Guitar,” made for Brad Whitford using wooden planks from the “The Barn,” the New Hampshire spot where the band first started performing; Memorable outfits from each of the band members; Unusual musical instruments such as the Waterphone, used in the beginning of “Janie’s Got A Gun”; 13 ft. tall neon sign from the “Honkin’ on Bobo” tour; One of the first issues of “Aero Knows,” Aerosmith’s self-published newsletter from 1978; Steven Tyler’s high school band drum; The original press kit from the band;  Stacks of vintage custom Aerosmith amps; Memorable instruments from each band member including over 20 guitars, and Denny Dent portrait paintings of the entire band.

Galleria at Sunset restaurants will give diners the opportunity to give back to the community during Three Square Food Bank’s Las Vegas Restaurant Week, June 17-28. Rodizio Grill, GEN Korean BBQ, World of Beer, and Bobby Mao’s Chinese Kitchen + Mexican Cantina will offer prix-fixe menus ranging from $20 to $40, with a fixed portion of proceeds from each meal benefiting Three Square and its pursuit of a hunger-free community.

“These four incredibly popular restaurants at Galleria at Sunset provide excellent off-strip options in Henderson for Las Vegas Restaurant Week,” said Jamie Cooper, Galleria at Sunset marketing director. “For 12 days, our guests can enjoy the restaurants they’ve come to know and love, while giving back to the community at the same time.” 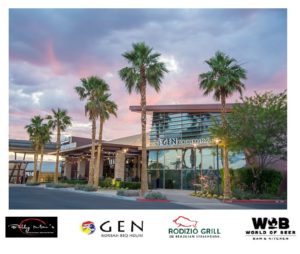 GEN Korean BBQ’s menu includes an all-you-can-eat lunch ($20) or dinner ($30), completing the meal with an ice cream macaron. Utilizing a cooking grill equipped at each table, diners choose their favorites from a wide selection of freshly prepared meats, seafood, and vegetables to create the perfect dish.

A four-course dinner will be available at World of Beer for $30. The first course includes the choice of a Caesar or spring kale salad followed by choice of mac n cheese bites or pesto hummus. Entrees include IPA Salman or half back baby back ribs. For dessert, guests have the option of the apple cobbler dessert flatbread or salted caramel cookie skillet.

Bobby Mao’s Chinese Kitchen + Mexican Cantina will offer a three-course lunch for $20. The first course includes choice of either wonton, hot & sour or chicken tortilla soup. For the second course, guests have the option of any chicken or beef entrees on the Chinese or Mexican menus. In addition, diners can top off the meal with chocolate or vanilla ice cream.

Country legends Lonestar are returning to Las Vegas for a special performance at the Sunset Amphitheater at Sunset Station on Saturday, August 10, 2019. Tickets start at $25 and are now on sale.

Known for merging their country roots with strong melodies and rich vocals, Lonestar, comprised of Richie McDonald (lead vocals), Michael Britt (lead guitar & backing vocals), Keech Rainwater (drums), and Dean Sam’s (keyboards & backing vocals), has amassed certified sales in excess of 10 million album units since their national launch in 1995, and achieved ten #1 country hits including “No News,” “Come Crying To Me,” and their crossover smash “Amazed” (which was also #1 on the Billboard Hot 100, the first record since 1983’s “Islands in the Stream” to top both charts). The band’s awards include a 1999 ACM Single of The Year for “Amazed” (the song also won the Song of the Year award), and the 2001 CMA Vocal Group of the Year. With over 100 dates worldwide per year, they are celebrating more than 20 years together.

Tickets to Lonestar are $20, $25, $35, and $40 plus tax and applicable fees and go on sale Friday, June 7, 2019 at 10 a.m. Doors open at 7 p.m. and guests under 21 must be accompanied by an adult. Tickets can be purchased at any Station Casinos Reward Center and The Fiestas, by logging onto www.StationCasinosLive.com. 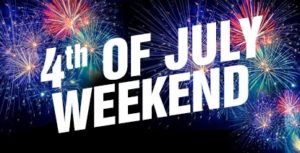 The Plaza Hotel & Casino will host its annual Independence Day party on Thursday, July 4 at its rooftop pool. Free to attend, the party will again culminate with downtown Las Vegas’ only live Fireworks Show lighting up the sky at 9 p.m. Bigger and better this year, the fireworks will be staged from multiple locations on the Plaza’s roofs and towers, ensuring an amazing show for party attendees and one that will be visible for miles.

At the party, guests can swim or relax poolside while a DJ plays crowd favorites. Doors open at 5 p.m. and festivities start at 6 p.m. with downtown Las Vegas’ only hot dog eating contest in the style of the famous event held annually at Coney Island. The contest winner will receive a grand prize, which includes $200, a free two-night stay at the Plaza, $150 to Oscar’s Steakhouse, a free pool cabana plus $50 towards food and beverage at the Pool at the Plaza. The contest is sponsored in part by Hoffy Hot Dogs, is limited to 10 participants, 21 years of age or older. Registration is open online until June 21. 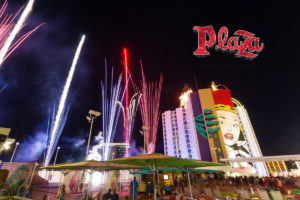 All weekend long, the pool’s cocktail bar will offer drink specials, including Jell-O shots (one for $3 or three for $5) and a selection of frozen and specialty cocktails, such as the festive Firework cocktail, a red, white & blue mix of Strawberry Daiquiri, Pina Colada Rum and Blueberry Lemonade Vodka ($12).

On Friday, July 5, guests can enjoy a relaxing day at the pool with a free inflatable flamingo drink holder. On Saturday, July 6, the fun continues with the Plaza’s Beer Olympics. Teams of 5 will compete to win prizes, and individual entrants are welcome as teams can be created onsite. For more details and to enter, visit: https://www.plazahotelcasino.com/entertainment/independence-day/.

Well, gang, that’s it for this week. I enjoyed watching the coverage of the 75th Anniversary Celebration of D-Day by all the networks. It was fabulous.  And in June 1950 the Korean War broke out, of which I am proud to say I served in the Air Force.