Fans gathered at the sold-out Las Vegas Ballpark® to watch Team Reilly Smith take on Team Marcus Allen in a showdown for Las Vegas’ ultimate bragging rights all in the name of charity. In a special twist, Zappos for Good upped the ante by offering $1,000 for every run scored during the game. A total of 36 runs were made between the two teams. Featuring professional athletes, celebrities, and media personalities the teams were led by Reilly Smith and Pro Football Hall of Famer Marcus Allen. The full team rosters included: 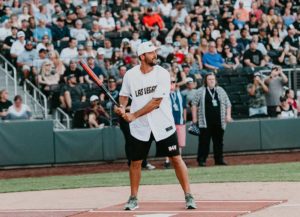 “The inaugural Battle For Vegas was fun for all of us out on that field, but our main goal was to raise money for a great cause,” said Reilly Smith, Battle For Vegas host. “Thanks to our incredible community, we did just that. I knew Vegas had the best fans in the league, and now I can say we also have the most giving.” 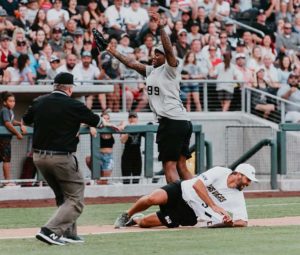 The Tyler Robinson Foundation (TRF) helps strengthen families financially and emotionally as they cope with the tragedy of a pediatric cancer diagnosis by providing grants specifically to offset out-of-pocket life expenses. TRF meets a critical need in communities across the U.S., Canada, and Mexico. Each year, one in 285 children are diagnosed with cancer. While many pediatric cancer organizations focus on growing awareness and support for families with the physical and emotional toll of a diagnosis, the huge financial hardship cancer treatment places on families is rarely discussed. More than 85-percent of every dollar TRF raises goes right to families in need. For more information visit TRF.org.

A lead-off Home Run Derby presented by Zappos started the night, which continued with a tribute to Tyler Robinson, whose family was joined on the field by children benefiting from the namesake foundation. Country music star and Las Vegas local, Sierra Black, sang the national anthem while more than 100 volunteers took to the field to hold up a massive American flag as three Lockheed Martin F-35 Lightning II jets from Nellis Air Force Base flew over the ballpark. Imagine Dragons’ bassist Ben McKee threw out the first pitch along with “Super Benji” Sanchez – a longtime baseball fan, cancer survivor and member of the TRF family. Imagine Dragons’ drummer Daniel Platzman and bassist Ben McKee accompanied by Mr. Las Vegas Wayne Newton performed a rousing rendition of the traditional “Take Me Out to the Ballgame.” Performances by the Raiderettes, the Knightline and Vegas Golden Aces punctuated the evening.

Ultimately, Team Marcus Allen took home the first-ever Battle For Vegas trophy, but the evening’s true winner was TRF, which can now use the more than $136,000 raised to support even more families battling childhood cancer.

The Neon Museum announced the recent hiring of Bruce Spotleson as vice president of fund and partner development. In this role, Spotleson will be driving corporate and individual support for the organization. Spotleson has had a distinguished career in Las Vegas, most recently serving as director of corporate partnerships for Vegas PBS. Prior to that role, Bruce was group publisher for Greenspun Media Group, where he was instrumental in the launch and development of numerous local publications focused on the Southern Nevada community. Before relocating to Las Vegas in 1996, he was publisher of the Tahoe Daily Tribune. During his time at the publications, his weekly newspaper column earned three first-place writing awards from the Nevada Press Association.

Spotleson currently sits on the executive committee of the Las Vegas Metro Chamber of Commerce, served as chairman of its Board of Trustees in 2014, is a past president of the Business Council and is a graduate of the Leadership Las Vegas class of 1999. His intimate knowledge of the Las Vegas community will greatly contribute to the Museum’s efforts moving forward.

Founded in 1996, the Neon Museum is a non-profit 501(c)3 organization dedicated to collecting, preserving, studying, and exhibiting iconic Las Vegas signs for educational, historic, arts and cultural enrichment. It has been named “Best Museum” by Las Vegas Weekly, one of “Sin City’s Best Retro Sites” by MSN, “No. 1 Las Vegas Museum Sure to Entertain and Educate” by USA Today’s 10best.com, “One of the Top 10 Coolest Things You Didn’t Know You Could Do” by Forbes.com, one of the “Top 10 Historic Spots in Las Vegas” by Vegas.com; one of “15 Most Fascinating Museums in the U.S.” by VacationIdea.com; and earns a consistent 4.5 out of 5 rating on TripAdvisor. On its 2.27-acre campus, the Neon Museum houses an outdoor exhibition space known as the Neon Boneyard (“boneyard” is traditionally the name for an area where items no longer in use are stored); the North Gallery, home to the nighttime augmented-reality, audiovisual spectacle, “Brilliant!”; the Boulevard Gallery outdoor exhibit and event space; and its visitors’ center, housed inside the former La Concha Motel lobby. The museum collection also includes nine restored signs installed as public art throughout downtown Las Vegas. Public education, outreach, research, archival preservation, and a grant-funded neon sign survey represent a selection of the museum’s ongoing projects. Both the Neon Boneyard and the La Concha Visitors’ Center are located at 770 Las Vegas Blvd. North in Las Vegas.

The event will take guests on a journey starting in the Veneto region, tasting the award-winning Pieropan Soave, a remarkably refreshing white wine typically enjoyed in warmer months.
From there the journey continues onto the Brancaia Winery, makers of the remaining three wines of the evening, located in Tuscany’s romantic Castellina in Chianti. Known for its sunny summers and gentle breezes that cool the hills, the region produces the renowned Sangiovese grape. Redolent with red, ripe fruit and lively acidity, Sangiovese forms the basis of Chianti Classico and Tre wines. 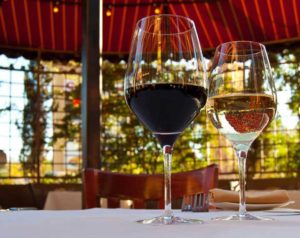 As always, Ferraro’s award-winning chef will prepare imaginative dishes to accompany each wine. Tickets for the all-inclusive experience are $75 and space is limited. To make reservations, please call (702) 364-5300.

Galleria at Sunset will host its second Sunset Shop & Wine on Saturday, June 29 from 4 to 8 p.m. The event will be complete with more than 15 wine tasting stations located inside popular stores, food, entertainment and exclusive savings and discounts. Admission is $30 per person and all event proceeds will be donated to Miracle Flights, which provides free flights to sick children in need of life-changing medical care not found in their local communities.

“The first Sunset Shop & Wine in February was a huge success – so we’re looking forward to another night filled with wine, shopping, and philanthropy,” said Jamie Cooper, Galleria at Sunset marketing director. “So, grab some friends, book a babysitter and join all of the fun in support of Miracle Flights!”

The wine, generously provided by Southern Glazer’s Wine & Spirits, will be located in participating stores such as Francesca’s, Bath & Body Works, Yankee Candle, H&M, See’s Candies & Chocolate, and more.  In addition to performances by Crown Avenue, delicious bites from featured Galleria at Sunset restaurants – Rodizio Grill, World of Beer, BRAVO! Cucina Italiana, and GEN Korean BBQ House – will be available. Samplings of the restaurants’ signature cocktails will also be served.

Food, cocktails and live entertainment for Sunset Shop & Wine will be located near event check-in, on the lower level of Dillard’s. The $30 per person ticket includes a keepsake wine glass, map of participating stores and Galleria at Sunset coupon book with exclusive discounts. Adults 21 and older are welcome to attend.

Well, gang, that’s it for the week.