The entire Las Vegas valley is invited to celebrate Independence Day at the 25th Annual Summerlin Parade this coming Thursday, July 4, 2019, from  9 – 11 a.m.  The parade features traditional floats, giant inflatable balloons, American military heroes, bands, musical groups, and a variety of kids’ favorite storybook and cartoon characters. More than 2,500 people are participating in the parade and more than 500 volunteers from dozens of local schools and community groups are assisting with parade operations. Over 16,000 cubic feet of helium will be used for the more than 25 giant inflatables. Attendance along the parade route is expected to top 40,000 people.

This year, in honor of the 25th anniversary, several new entries are added to the parade roster, including “Cheers to 25 Years float featuring the Desert Angels gospel choir”; “Mary Poppins’ Jolly Holiday”; “Soaring with Dumbo”; “Mamma Mia Dance Party”; “The Wiz: Ease on Down the Road”; “Apollo Moon Landing 50th Anniversary”; “Fortnite Dance Challenge”; and appearances by Buzz and Woody, the Descendants and Las Vegas Kaminari Taiko. In addition, parade organizers will feature a “Flashback Float.” The float, selected by the public through an online voting process, is “Undersea Jubilee,” an iconic crowd favorite that will be brought out of retirement for one more procession through Summerlin in honor of this special anniversary. 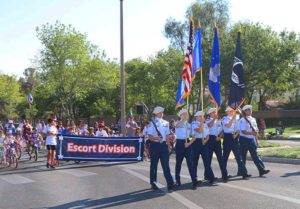 The parade is organized by The Summerlin Council, the non-profit arm of the Summerlin Community Association dedicated to the social, educational, and recreational enrichment of residents. The parade is free and open to the public. Everyone is encouraged to arrive early, bring water and wear sunscreen.

Offering hope, recovery and a way forward for thousands of people from all walks of life suffering from a gambling addiction, the Problem Gambling Center was officially dedicated and renamed to honor its founder, the late Dr. Robert Hunter, at a special event on June 26 that included members of the community and local leaders as well as the PGC board of directors, past and current clients, staff, and new Executive Director Stephanie Goodman.

Known as the world’s leading gambling addiction specialist, Hunter (1955-2018) founded the Problem Gambling Center (PGC) in 1998 as the first nonprofit gambling addiction center. Helping those with gambling problems in Las Vegas, the gambling capital of the world, became the mission of the PGC under Hunter’s direction.

His program at the PGC consists of six weeks of intensive daily counseling, followed by four weeks of weekly sessions, and upon completion one-on-one therapy sessions as long as needed. As a result of his clinical methods, Hunter’s treatment program at the PGC operates with an 80-plus percent success rate for recovery.

Recognizing Hunter’s significant impact, city of Las Vegas Councilman Bob Coffin presented a proclamation from Las Vegas Mayor Carolyn Goodman that declared June 26 as Dr. Robert Hunter International Problem Gambling Center Day. It said in part: “Dr. Hunter’s efforts in the area of gambling addiction have assisted individuals and their families both in Las Vegas and internationally. Best wishes to the Center as it continues to offer services and important work in his memory.”

At the event, Connie Jones, board member for the now Dr. Robert Hunter International Problem Gambling Center, echoed the sentiments: ““Dr. Hunter was the world expert on Problem Gambling helping our community through his compassion, understanding and science. We are looking to continue his legacy by alleviating the stigma associated with Problem Gambling and helping as many people as we can who are affected by this debilitating addiction.”

Hunter left a legacy of treating more problem gamblers than anyone in the world. The PGC continues his work and methods to help hundreds of Nevadans every year overcome the often-invisible addiction of problem gambling and turn their lives around – regardless of their ability to pay for services. And the PGC helps not only those individuals who have gone through the treatment program, but also the family, friends and employers who are also affected by the actions of the problem gambler. To learn more, visit: http://www.gamblingproblems.com.

Ferraro’s Italian Restaurant and Wine Bar will be completing renovations to its dining room and lounge June 30 – July 5 and will be closed while work is under way. These renovations will include new flooring throughout the restaurant as well as a complete remodel of the lounge with new liquor displays, bar top, tables, and chairs. The effect will be much lighter, brighter, and more contemporary. Phase one of Ferraro’s renovations was completed last fall with the introduction of new contemporary décor, featuring clean lines and soft cream walls with dark wood finishes, replacing its previous Old-World-inspired scheme that utilized elements such as overstuffed upholstery and heavy draperies in gold, orange and burgundy.

“In order to stay relevant in the restaurant business, we must be willing to update not only our menu, but also our ambiance,” explains Gino Ferraro, owner, Ferraro’s. “We’re excited to offer a fresh new atmosphere for our guests to enjoy along with their favorite Ferraro’s dishes.”

Among the special featured dishes guests will be able to try this summer amidst the new enhancements will be those featured in the Summer Regional Menu Series. Every two weeks, award-winning Chef Francesco DiCaudo will prepare a new, four-course menu comprising dishes from a different Italian epicurean hotspot. All menus are priced at $49 per person and select bottles of wine, chosen by Ferraro’s sommelier to complement the featured menu, will be offered at special values as well. As a result of the closure for remodeling, the next menu, spotlighting Trentino, will be offered July 6 – 11.

Foodies across the world will rejoice over Frites Las Vegas – the first-ever French fry concept on The Strip, bringing back the richness of beef tallow for ultimate fry perfection. Frites Las Vegas, opened last Wednesday, inside the Excalibur Hotel & Casino’s Castle Walk, and is the first original concept from Feel Good Brands, which has operated multiple franchises for more than 20 years in the Las Vegas valley.

“We want to really savor the fry – an item that in and of itself is a glorious thing – so we knew we had to master the craft,” said Feel Good Brands Founder Lincoln Spoor. “A lot of research went into creating what we think is the perfect fry – everything from the type of potato to the cut, but the most important factor was diving into the frying component and without a doubt, beef tallow brought the richest and most delicious flavor.”

Fry fanatics will rejoice as they bite into a crisp fry with just the right amount of crunch on the outside and perfect creamy texture on the inside, thanks to the unique triangular Frites cut that also allows for maximum dip-ability.

House Pumps satisfy every flavor palette from the classics like Frites Fry Sauce and Spoor’s favorite, Buttermilk Ranch, to more Specialty Sauces such as Thai Chili, Deviled Egg, Nacho Cheese and Aji Crema. The sweet side of the menu allows guests to crunch into Churro-style Crinkle Cut Sweet Potato Fries with Whipped Malted Nutella Cream made with Coconut Oil or cool off with a Root Beer Float.

Original Frites and specialty frites are made with 100% beef tallow, bringing back the good ol’ way French fries were made when rendered beef fat was a staple of nearly every kitchen in America and was the “secret” ingredient to some of the world’s most popular French fries. In addition to the Original Frites, Frites Las Vegas offers a vegetarian option using peanut oil.

Unlike any other rideshare service, “Trip to Strip” was created by the Regional Transportation Commission of Southern Nevada (RTC) specifically for small groups looking for an affordable way to travel together to popular tourist destinations. The new transportation option, which never charges surge prices, officially celebrated with a star-studded event to welcome the new service to Las Vegas.

To meet the growing demand, Trip to Strip’s service area recently expanded. It now covers the Las Vegas resort corridor from downtown Las Vegas to the M Resort, including McCarran International Airport and the Las Vegas Convention Center (LVCC). Pickups and drop-offs are at the nearest RTC fixed route or paratransit stops, most of which are located near property entrances, and the zero level of McCarran International Airport.

The RTC partnered with global transportation operator and leader in shared mobility services, Keolis, one of its transit system operators to provide the service and ride hailing app. Las Vegas is the second microtransit service launched in the western U.S. and the largest public agency-led microtransit service in North America.

Able to carry up to 11 passengers, Trip to Strip is ideal for people traveling in groups for conventions, meetings, weddings, or birthday and bachelor(ette) parties in Las Vegas. Trip to Strip provides a luxury ride via a limousine-style interior without premium prices. Vehicles offer various amenities, including complimentary Wi-Fi, USB charging ports and ample luggage space. Wheelchair accessible vehicles are also available.  Rides start at $6, and prices are determined on the distance and number of passengers in the booking party. New Trip to Strip users can receive 15-percent off their first ride with the promo code “FIRSTRIDE.”  The Trip to Strip app is available free in the Apple and Google Play stores and is integrated with the popular “Transit” app used in more than 125 metropolitan areas worldwide, including in Southern Nevada as the transit planning element of the rideRTC mobile ticketing app.

Well, gang, have a wonderful July 4th Holiday and enjoy the fireworks.