Once upon a time, People Magazine called Bob Anderson the very best singing Impressionist in the world. You know what? He still is! Out of all the current Tribute Artists on Broadway or on tour, VH1 named him #1. Anderson will be back in Las Vegas for 3 nights performing “Music to Remember” at the South Point Hotel/Casino Showroom, August 13-15th at 7:30 PM. 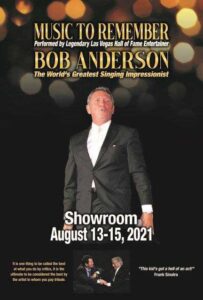 Bob has no rivals when it comes to capturing the essence of the artist he impersonates. What separates Anderson from other impressionists is his mastery of the signature style of each individual that he creates, and the level of detail devoted to each creation.

He is a superstar among his peers. Anderson is pure showmanship and talent. He makes you believe that you are truly watching some of the greatest entertainers that ever lived. Entertainers that gave us the greatest period of music that resulted in Las Vegas becoming “The Entertainment Capital of the World.”

Anderson’s story reads like a Hollywood novel. From opening for Nancy Sinatra, because a scheduled opening act had a disagreement within the group and quit. Bob was there at the right time, did a quick audition, and within seven hours was her opening act. He was later invited to a party at Merv Griffins home where Merv discovered Bobs act—doing impressions of the great singers of that time. Merv booked him on his television show and introduced him as “The Singing Impressionist.” The rest is a unique study in being at the right place at the right time.

Soon Bob was becoming a regular on every talk and variety show with over 200 national and international television appearances. He appeared on the Tonight Show starring Johnny Carson twice in one week. The only performer ever to do so. With all the television exposure, Anderson was given his own room at The Top of the Dunes Hotel where the show ran for an astonishing total of 10 years. Right from opening night, Anderson was the talk of Las Vegas. .

Today Anderson’s production “One More For The Road,” (formerly called FRANK The Man The Music that headlined at The Palazzo Theater) is a  “You have to see it to believe it” performance and is acclaimed by every critic and audience in attendance. The show recently toured with Live Nation, and will do so again after it’s Broadway opening, which was delayed due to the pandemic,

Bob will also have the honor of taking to the stage at Carnegie Hall, where great entertainers from Al Jolson, Judy Garland, and Sinatra performed, at the prestigious Stern Auditorium this December with his one-man show honoring Frank Sinatra,.

“Don’t ever doubt that a mere second can change your life forever,” Anderson says. “Special moments happen in life that offer us the chance to do something we were created to do. It’s what we do in those moments that defines the rest of our lives. That one moment when I jumped out of my seat and said to Nancy Sinatra, ‘Hey, I’m a singer,  I can do whatever you need,’ brought me more than I could imagine.”

Buddy Rich, one of the most influential drummers of all time, once proclaimed to the Detroit Free Press: “There are only three singers good enough to sing with my group. They are Frank Sinatra, Tony Bennett, and Bob Anderson!” Sinatra himself said it best, “This kids got a hell of an act.”

The 3 Redneck Tenors are a new breed in the “tenor genre” – their musical comedy featuring classically trained veteran artists is like Duck Dynasty goes to Carnegie Hall! It has been said that if Larry the Cable Guy, Il Divo, and Mrs. Doubtfire had a baby, that child would be The 3 Redneck Tenors. Written by opera-veteran Matthew Lord with music arranged by award-winning composer Craig Bohmler, and starring Mr. Lord, Blake Davidson, and Jonathan Fruge, The 3 Redneck Tenors were top finalists on “America’s Got Talent” and were featured on “The Tonight Show with Jimmy Fallon.”

So, get ready for one side splitting ride you can only have with The 3 Redneck Tenors! Hosted by Laugh Factory regular, and strip favorite, comedian Derek Richards.

The Laugh Factory is located on the mezzanine level of the Paradise Tower inside Tropicana Las Vegas. Tickets are $39.95 for General Admission, $49.95 for a VIP Table and $59.95 for Golden Circle and VIP booths (plus applicable taxes and service fees), and can be purchased in-person at the Tropicana Las Vegas Show Tickets desk, online at www.troplv.com or by phone at 800-829- 9034 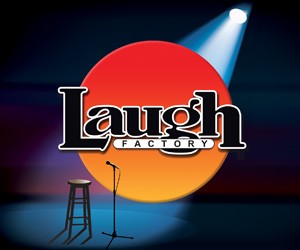 Since opening the doors to its original Hollywood location 42 years ago, The Laugh Factory has become known for launching some of the hottest stand-up comedians in the world, including: Tim Allen, Louie Anderson, Roseanne Barr, Drew Carey, George Carlin, Jim Carrey, Dave Chappelle, Dane Cook, Rodney Dangerfield, Ellen DeGeneres, Sam Kinison, to name just a few of the famous.

With locations in Hollywood, Long Beach, Chicago, Reno, and recently opened in San Diego, the Laugh Factory is known around the world as one of the premiere spots for comedy and is celebrating its 9th anniversary at the Tropicana Hotel. It continues to book comedy superstars such as  SNL star Jon Lovitz, who will be returning for two more runs, Monday-Sunday August 23-25 & August 30th – September 1st . Something About Mary & Half Baked, actor/comedian, Harland Williams headlines August 27- 29, Pauly Shore Sept 27 & Oct 25th, and comedian & film star Jeremy Piven, from HBO’s Entourage December 2-5.

After surviving the pandemic and nearly two years of road construction on Main Street, one of the region’s finest destinations for authentic Mexican dining has come roaring back, delighting its dedicated fan base in downtown Las Vegas and beyond. This reporter has to admit that I personally it is one of my favorites when I’m in the area.

Join Sam & Ash of their eponymous downtown Las Vegas-based law firm, and John Curtas, one of Las Vegas’ favorite food critics, as they visit the inimitable Letty’s de Leticia’s Cocina at 807 S. Main Street in the heart of downtown.

“When the chips were down, Letty’s doubled down,” Curtas says in a new video spotlighting Las Vegas’ great reopening. “And Sam & Ash did the same thing.”

Ash adds: “Letty’s is visually interesting, with murals everywhere. But the best part? The food is fantastic.”

Under the leadership of chef and owner Leticia Mitchell, Letty’s specializes in fresh, garden-picked ingredients throughout the innovative menu. It’s authentic Mexican food made to order and prepared with genuine passion. “I remember when Letty’s originally opened, coming here all the time and being excited,” says Sam. “So, it’s been really neat seeing it come back and reopen.”

As Curtas tells Sam and Ashley in the video: “Your firm is committing to downtown and committing to Las Vegas, just like a lot of these little businesses are. It’s why we love coming here.”

The internationally acclaimed production,  “WOW – The Vegas Spectacular” will make its dazzling return to the Rio Showroom at Rio All-Suite Hotel & Casino in Las Vegas on Tuesday, August 10.  The production will feature many of its favorite performers, as well as all-new acts that will thrill audiences nightly.

Prior to the pandemic shut down, “WOW” had received numerous awards including the prestigious “Best of Las Vegas” awards as Best Value Show (Gold), Best Family Friendly Show (Silver), Best New Act/Show (Bronze) and Best Production Show (Bronze).  Many of the thrilling and hilarious numbers familiar to audiences will return including comedian Alex Traisci, along with brand new acts including NAVAS and their “Wheel of Death” (Gold Medalists at the Monte Carlo Festival), the breathtaking Adagio act “Duo Ice,” the gravity-defying hand-to-hand act “Acrodream,” “Rialcris” the trio of muscle men recently featured on America’s Got Talent, the aerial duo “Luna Girls,” a mind-blowing Icarian act and, the juggling talents of Paul Ponce, the son of former “WOW” stars Silvia and Victor Ponce who are now starring in “EXTRAVAGANZA” at Bally’s Las Vegas.

“WOW” has performed over 1,200 performances since its debut at Rio Las Vegas on Oct. 7, 2017, and has transported audiences into a world of water, wonder and fantasy. This acclaimed production, seen by more than 2.5 million people, features a cast of more than 30 international performing artists, acrobats and dancers fly, flip, fold, dance and defy the imagination in a 180-degree theatrical setting that engages the audience from beginning to end with 3D multi-media projections, water walls and holograms. Add breathtaking acrobatics, dazzling choreography, thrilling theatrical lighting, magnificent music and some brand new, never-before-seen acts in the show and you are sure to be wowed!

“We are so excited that we are finally able to reopen ‘WOW’ at the Rio and once again entertain the Las Vegas audiences that have embraced our show and our cast over the last three years,” said creator and director, Hanoch Rosènn.  “After the last 16 months our cast is thrilled and ready to return to the stage with many of the audience’s favorite acts, as well as a few new ones that will for sure ‘wow’ our audiences.”

“WOW” made its North American premiere in 2017 in the Rio Showroom which was transformed into a world of water including a custom-built stage and pool that promises an up-close and interactive audience experience. Though grand in scale, design and production, the family-friendly show will provide Las Vegas audiences with an intimate theatrical water show adventure unlike any other. The international cast features some of the greatest acrobats and specialty acts from the USA, Canada, Italy, the Netherlands, Ukraine, France, the UK and more.

Bringing the tradition of well-prepared coffees, toasts, teas, and pastries to Green Valley, Founders Coffee opens a third location on Monday, August 16, the first inside of a La Bonita Supermarket. Launching inside of the market’s Henderson location on Green Valley Parkway, the partnership brings two Las Vegas favorites together.

“It’s amazing to see the growth of locally owned businesses in Las Vegas, and we’re so proud and excited to partner with La Bonita for our third location,” says Founders Coffee Director Brittney Riskus. “Shoppers can order their Founders staples and some new items as well.”

Located at 2851 N. Green Valley Parkway in Henderson, Founders Coffee La Bonita will be open daily, from 6 a.m. until 6 p.m.