One of the most famous voices used in many animated movies, Charles Fleischer, will be appearing at the Laugh Factory, inside the Tropicana Las Vegas, in a special engagement opening Thursday evening through Sunday (Jan. 17-20, 2019), along with Bob Golub and Nick Aragon. Showtimes are 8:30 and 10:30 p.m.

Fleischer is an American stand-up comedian, actor, writer and musician, best known for appearing in films such as A Nightmare on Elm Street, Who Framed Roger Rabbit, The Polar Express, and We’re Back! A Dinosaur’s Story. He also reprised the role of Roger Rabbit in the Roger Rabbit theatrical shorts. As the voices of Roger Rabbit, Benny the Cab, Greasy, and Psycho in Who Framed Roger Rabbit Charles film success continued, and he went on  to perform the voice of Roger in several Disney television and theme park appearances at several of the Walt Disney Parks and Resorts, and in three follow-up short subjects to the original film.

Other voice roles for Fleischer include The Polar Express and We’re Back! A Dinosaur’s Story. On-screen roles include Back to the Future Part II and Gridlock’d. Fleischer’s first movie role was as “Brick” who was one of Richie’s friends (played by Robby Benson) in the movie The Death of Richie, released January 10, 1977. His latest film is Reality Queen! (2016) as the Talk Show Host

Fleischer had a recurring role on the 1970s TV series Welcome Back, Kotter as Carvelli, as Chuck on the ABC series Laverne & Shirley, and on the Disney cartoon series House of Mouse as the voice of Benny The Cab. He is also a musician and songwriter. Charles performed as a guest (with his harmonica) with the group Blues Traveler at the Wiltern Theater in Los Angeles on November 22, 1995. Fleischer is now the part-owner of a multi-media company in Southern California and a writer for television and movies. He still does stand-up gigs occasionally.

Sleeves up, pants down: The Naked Magicians are bringing their finely chiseled magical and physical talents to Las Vegas from Australia for their first Strip residency. The R-rated magic show, starring Mike Tyler and Christopher Wayne, will perform six nights a week at 10 p.m. inside Brad Garrett’s Comedy Club at MGM Grand starting Wednesday, Feb. 13.

Tyler and Wayne, two of Australia’s most famous magicians, bare it all in The Naked Magicians, foregoing top hats and capes for full-frontal illusions complete with magic, muscles, and endless laughs. Left without sleeves or pockets, The Naked Magicians perform mesmerizing feats that are both baffling and entertaining. “We are thrilled to open our first Sin City residency,” said Tyler. “Las Vegas is very sexy with a lot of magic and is the perfect place for our show.”

Following the requests of several boisterous audience members to make their clothes disappear, Tyler and Wayne did just that. The Naked Magicians have performed and undressed for millions of fans in more than 200 cities and seven countries in high-profile locations including London’s world-famous West End.

The complete package of funny, athletic, sexy, and good with his hands, Tyler was a competitive swimmer in the National Championships and Pan Pacific Games, before discovering his love of magic and becoming a skilled hypnotist. Often confused as a Macklemore look-a-like, Wayne originally starred as the “clothed” magician on Channel 10’s long-running television program, “Toasted TV,” before becoming the first Australian magician in broadcast history to have his own series, “More Than Magic,” which aired in Australia, New Zealand, England and the United States.

“Good magicians don’t need sleeves and great magicians don’t need pants,” said Tyler. “When we say ‘abracadabra,’ the audience isn’t always looking at our hands.” “It’s kind of crazy because magic is the second-oldest profession and we couldn’t believe no one had combined the two things that everyone loves: magic and nudity,” said Wayne.

The Naked Magicians have been featured on major news outlets including USA Today, Cosmopolitan, HuffPost, and KTLA, among others. The Chicago Tribune says, “these guys sure know a few new spots to hide some playing cards.”

Global Winter Wonderland, a spectacular lantern festival and multicultural theme park, is keeping the holiday spirit of giving alive with a buy one, get one free offer on their Unlimited Carnival Ride passes, available now through Mon., Jan. 21 and is open daily from 5:00 p.m. Located in the north lot of the Rio All-Suite Hotel & Casino, guests can travel around the world in one night while viewing the larger-than-life lantern designs of landmarks from all seven continents as well as witness the incredible feats of strength of the Shaolin Warriors, Chinese acrobats, wire walkers and more! The new family event of the holiday season also features numerous carnival rides and games, international cuisine, live entertainment, and celebrations of holiday traditions and various cultures from around the world.

General admission tickets start at $20 for adults and $18 for children 4-12, plus tax and fees. Normally $25 per person, unlimited carnival ride passes are buy-one-get-one free when purchased at the on-site box office. For more information on  Global Winter Wonderland, please visit globalwonderland.com or follow on Instagram at @globalwonderlandlv or Facebook @GWWVegas. 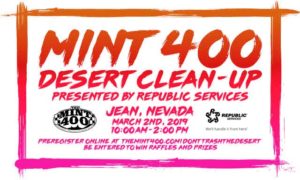 The Mint 400, in partnership with Republic Services, has announced an industry wide desert clean-up event Saturday, March 2nd in Jean, Nevada beginning at 10:00 a.m.  The goal of the event is to unite the off-road community and clean up waste dumped illegally in the Jean area as well as promote sustainable habits and responsible public land use to improve Southern Nevada’s pristine desert landscape. The Mint 400 Desert Clean-Up event is presented by Republic Services, held in cooperation with the Southern Nevada BLM office.

In 2017, Republic Services partnered with The Mint 400 for their inaugural “Dash For Trash” event. Volunteers removed 14.54 tons of waste from the Nevada desert in the Jean area, but the team identified more work to be done. The Mint 400 and Republic Services nearly doubled that number in 2018, clearing 22.06 tons (44,120 lbs.) of trash from our beautiful desert.

This March the group hopes to grow these numbers substantially. The Mint 400 Desert Clean-Up will be focused around the Jean OHV area – land that is not only used for The Mint 400 race course, but also for numerous races throughout the year spanning multiple off-road organizations. The Mint 400 would like to invite all off-road enthusiasts and members of the Las Vegas community to spend a day in the dirt, cleaning up our race course and OHV areas.

Participants at the clean-up will receive an official limited-edition Mint 400 / Republic Services t-shirt and automatically be entered into a massive industry raffle that will include thousands of dollars in donated off-road parts, accessories, and swag from industry leading companies. Additional raffle tickets will be for sale onsite and all proceeds will go towards the cleanup costs.

Companies looking to get involved or donate product to the raffle can email us here.

Participants are asked to bring their own drinks and snacks, plenty of warm clothes, sunscreen, and work gloves to protect your hands. You will not need an off-road vehicle to access the clean-up sites. Please pre-register using the online form to help us better organize this fantastic event. Thank you in advance for your support!!

Experience beautifully crafted songs that inspire community and love Sunday, Feb. 3, with Flor de Toloache and The Villalobos Brothers.  Don’t miss the opportunity to see both Mexican folk bands for $25, plus taxes and fees, at 7:30 p.m. at the Historic Fifth Street School, 401 S. Fourth St.  Founded in 2018, Flor de Toloache is New York’s first, and only, all female mariachi group. The quartet’s diverse ethnicities and musical backgrounds influence the sound that has illuminated stages all over the world, captivating audiences with a unique flavor and sound that preserves centuries of mariachi while pushing boundaries. The group’s live performances have been praised by Rolling Stone, Billboard, The New York Times, GQ and many more. The Latin Grammy-winning group has collaborated with Dan Auerbach of The Black Keys, Chicano Batman, and No Te Va Gustar.

The Villalobos Brothers will return to the Historic Fifth Street School to co-headline the post- Big Game show. Acclaimed as one of today’s leading contemporary Mexican ensembles, the brothers masterfully blend and celebrate the richness of Mexican folk music with the intricate harmonies of jazz and classical music.

They were the first Mexican band to play at the Apollo Theater and have collaborated with Arturo O’Farrill, Antonio Sánchez, Eduardo Magallanes, Dan Zanes, and many others.  For tickets and more information click here or call 702-229-ARTS (2787).