The often-monikered “Bad boy” of Persian comedians, K–von whose name means: “Saturn”, in Persian, is by far one of the smartest and funniest Iranian comedians coming out of the West Coast. While he did grow up in Las Vegas, we assure you, you will not sense even an inkling of teardrop-drought while enjoying his side-splitting and constantly overflowing fountain of stand-up. Born in Reno, Nevada, he is the most famous half Persian comedian in the world. He is also the only one! The star of MTV’s hit show “Disaster Date“, he’s received rave reviews for his comedy on NBC’s ‘Last Comic Standing’, NETFLIX, Good Morning America, BBC, and NPR.

Performing approximately 250 shows a year for colleges, non-profit organizations, cruise ships, corporate events, and our troops, keeps K-von busy. His style is versatile yet relatable with fun storytelling and high-energy performances about a variety of mainstream topics, whether he is your mc or standup comedian for the event.

“K-von made our event great. We had students from all walks of life who had no idea how much fun they were about to have. He also stayed after to do autographs and take photos,” from the University of Connecticut.

“The Cocktail Cabaret” has resumed performances at Cleopatra’s Barge at Caesars Palace and is doing great business since its return. This reporter visited the newest version and finds it very rewarding and worth a visit.

“We’ve created a knock-your-socks-off musical tour de force, so we’re more than excited that Caesars Palace is home to The Cocktail Cabaret,” stated Keith Thompson, director, arranger, and co-producer of PK Entertainment. “Thanks to all of our fans, friends and colleagues for supporting us and believing in us.” 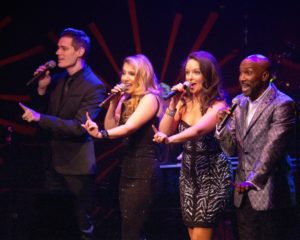 “Our original idea when we opened the show last November was to present a modern musical twist to a show reminiscent of ‘Vintage Vegas,’ a time when the great and popular entertainment happened in the smaller venues on the Strip. Specifically, we celebrate the cocktail hour with an elegant and fun show that gets our audience ready for dinner or a night-on-the-town,” said Thompson. 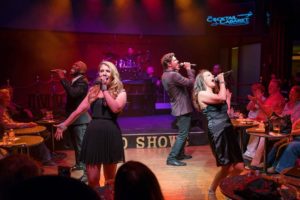 Over the course of the show, original cast member classical/pop singer Daniel Emmet made it all the way to the finals of NBC’s “America’s Got Talent,” and Fortenberry recently completed a three-week, 14-city solo concert tour of China.

“The Cocktail Cabaret” is the first show on the Strip created and produced by PK Entertainment, a Las Vegas-based entertainment company founded by powerhouse musical team Thompson (“Jersey Boys,” “Idaho! The Comedy-Musical” and “The Composers Showcase” at The Smith Center) and Fortenberry, the critically acclaimed pianist who is a veteran of 10 Broadway shows, eight national tours (“Cats,” “Ragtime,” “The Lion King”), a concert headliner with his newest release, “Give My Regards” and was the Liberace hand/body double in HBO’s biopic, “Behind the Candelabra.

The audience can expect a variety of songs performed by the stellar talent, “Girls Just Wanna Have Fun,” “Viva Las Vegas,” “Diamonds Are Forever,” “That’s Life,” “Bridge Over Troubled Water,” a cocktail medley, a tribute to the blues and many more.   Three of the show’s songs, including the title song, were written by Thompson.

Truly a piece of Caesars Palace’s storied history, Cleopatra’s Barge offers a classic vintage-Vegas experience. With its intimate size and red and gold décor, the luxurious floating barge is an ornate replica of the graceful craft that transported the royalty of Egypt on the Nile River in the time of Julius Caesar.

Performances are scheduled at 6 p.m. Wednesday through Saturday, dark Sunday through Tuesday.

Tickets are on sale now for shows priced at $39 per person for general admission and $59 for VIP seating, plus tax and applicable fees. Tickets can be purchased online at www.CocktailCabaret.com, in-person at any Caesars Entertainment box office, or by calling 702-777-2782 or toll free 855-234-7469.

Global sports entertainment leader Topgolf and TCL, the fastest-growing television brand in North America, have announced a national partnership that will generate exciting esports entertainment at Topgolf, designed for gamers from all walks of life. The first TCL esports Lounge will open at Topgolf Las Vegas in early January, aligning with the 2019 Consumer Electronics Show Jan. 8-11.

In addition, Topgolf is designing turn-key solutions for esports events to be hosted at all Topgolf venues. Topgolf is bringing their famous special formula of hospitality, food and beverage and entertainment production to esports. Topgolf provides a network of venues which can host esports events and make it simple for publishers, teams, brands, and leagues to create meaningful experiences at Topgolf.

Topgolf is also partnering with national esports leagues to host events, qualifiers, local and weekly leagues, which will attract gamers, influencers, and celebrities to compete in tournaments at Topgolf venues. TCL and Topgolf expect the partnership to reach more than 63 million guests annually over the multi-year partnership.

“Topgolf is a destination unlike any other and as America’s fastest-growing TV brand, TCL is excited to be teaming with one of the fastest-growing sports and entertainment brands in the world to create a new experience for the esports community and Topgolf guests,” said TCL North America Senior Vice President Chris Larson. “

The Las Vegas Chapter of Speedway Children’s Charities will distribute more than $260,000 to 60 local charities after another successful year of fundraising.  The charity, which has raised and distributed more than $5 million since its inception in 1999, awarded the funds to the deserving Southern Nevada charities at its annual Grant Distribution and Holiday Tree Lighting Ceremony at Las Vegas Motor Speedway on Tuesday, Dec. 11. The Grant Ceremony was held in the Drivers’ Meeting Room in the speedway’s infield media center.

The Assistance League, Nevada Childhood Cancer Foundation, Ronald McDonald House Charities of Las Vegas, and The Shade Tree Inc. are among the charities receiving grants. Children and representatives from most of the organizations attended the event, which included food, holiday games and gifts from Santa Claus donated from a toy drive held by Harsch Investment Properties.

The children and their families also were  treated to complimentary tram rides through Glittering Lights at Las Vegas Motor Speedway when the program concluded. “It’s been another great year of fundraising for the Las Vegas Chapter of Speedway Children’s Charities, and we can’t wait to share some joy with these 60 deserving charities,” said Paulette Anderson, director of the Las Vegas Chapter of SCC. “Seeing the children’s smiling faces as we celebrate and spread cheer makes all our hard work worthwhile, and there’s no doubt our charity’s efforts are changing lives in our community. It’s was  a great night!”

Making a difference in children’s lives is the focus of Speedway Children’s Charities, and SCC strives to do this in collaboration with the nonprofit organizations it supports nationwide. Since Speedway Children’s Charities was founded in Charlotte in 1982, more than $52 million in grants has been distributed to children’s charities to help ensure every child in need is given the tools to build a better, brighter, and healthy future.