Twenty-nine thousand Instagram followers can’t be wrong! Meet singer/songwriter James D. Gish, whose growing online following signifies his natural charisma and massive talent on stage. At just 22, he has already mastered an array of genres, captivating crowds with his renditions of classical, jazz/big band, Broadway, and light opera music. James will be performing on Friday, December 7 at 7:30 p.m. at the Summerlin Library and Sunday, December 9 at 2 p.m. at the Clark County Library.

Fans know that this emerging star is no stranger to Las Vegas-Clark County Library District. Having performed to capacity audiences in January 2018, James returns — joined once again by  iconic songstress and Golden Globe nominee Susan Anton — for two holiday shows sure to bring down the house.

Born in Las Vegas, James was raised in the small community of Bullhead City, Arizona, but his remarkable voice has since taken him all over the country. While earning his bachelor’s degree in business from Barrett Honors College at Arizona State University, he performed in approximately 400 shows, and played the lead in such classic musicals as “West Side Story,” “Phantom of the Opera,” “Beauty and the Beast,” “Anything Goes,” and “Newsies.” Starting in January, he is set to star as Bob Gaudi in “Jersey Boys” at the Phoenix Theatre.

In 2017, he released his debut EP, “So In Love,” which was recorded in Nashville at Warner Bros. Studios. An immediate hit, it shot to the top 10 on iTunes within its first week of release. Susan Anton is among James’ biggest fans. “When I grew up,” said Susan, “my mom and dad always had the radio on, playing artists like Frank Sinatra, Nat King Cole, and Tony Bennett. When I heard James’ voice, he reminded me of those great singers.” And it’s only a matter of time before he joins their ranks.

And, speaking of The Man (Sinatra), I stopped by Piero’s last Friday to check out my friend, Pia Zadora, who has returned to her residence gig once again. She’s there every Friday and Saturday evening, with her permanent guest, Sonny Charles of the World–Famous Checkmates (an era long gone gang).

As many of you know Pia was a favorite of Frank’s, as she toured with him as an opening act. later on, she hit the road with conductor Vinnie Falcone (who was Sinatra’s conductor for 10 years) with a 32-piece orchestra and toured the Nation.  A lot of our local celebrities will often stop by to say hello, sing a song or two, and stay to enjoy watching two fabulous pros entertain. Sonny is really one of the best at singing the blues, jazz, and those Oldie but Goodies that we all cherish. And, Pia, wow can she mesmerize an audience.  I love her soft styling and the way she can take a song and make it all her own.

One of her guests that evening was a new friend of mine, Elijah Rock, who I reviewed the other week when he entertained at the Italian American Club. I really like this guy and I love what is happening in our town now. New talent is heading to the village in the middle of the desert: Elijah, Angela Teek, James Gish, are just a few of the new singers who have hit town lately.

Retired casino executive Ron Erickson was talking with Sonny Charles, the other day and they started talking about Aretha Franklin. Erickson asked Sonny if he knew her and he said “did I ever. We were thinking about adding a girl singer in the group, so we auditioned her for the Checkmates back in the 60s.” What happened,” Erickson asked. “She sang and played piano much better than we did…we sure didn’t want her around.” Charles laughed honestly. Ah show biz.

Governor Sandoval recently awarded Volunteer Veteran Supporter Charm McElree a Certificate of Recognition for the work she has accomplished with the program Operation Recognition.  This program awards eligible veterans of WWII, Korean Conflict and Vietnam Wars their high school diplomas if they  left high school to join the Armed Forces. Charm, who was coordinator of an adult school in California, was introduced to the Operation Recognition through the San Bernardino County Schools.  They asked her if she would be willing to let five-veterans walk across the stage in cap and gown, an event they missed in the past.

Her passion grew for the program and in the last four-years of her working career, she graduated 15.  Retiring to Boulder City in 2014, she continues the work here in Nevada and has to date, graduated 25 veterans awarding diplomas from 18 different states.

This reporter received his in San Diego in February 2017, in front of the Board of Education which was in session that evening. Charm was there, as she usually is when an event is to take place.

Another thing you need to know is that family members of deceased or severely handicapped veterans  may apply as well as those veterans who obtained a GED while in service.  If you would like more information regarding Operation Recognition, Charm can be reached at 760 885-0935 or [email protected].

Set your calendars for Friday, December 7 as the Associate Board of Ambassadors of Las Vegas hosts Bells and Bubbles, an evening of holiday mingles and jolly good cheer. The event, which benefits the American Cancer Society, will also provide the community an opportunity to help out those in need with clothing donations for Safe Nest Las Vegas. Attendees are encouraged to bring clothing boys and young men as well as comfortable clothing for women. Tickets are $40 or $35 with a gently used clothing donation.

Revel in the holiday hullaballoo with delicious snacks, desserts and all the trimmings along with complimentary wine and a champagne toast for survivors or peruse the silent auction for that perfect holiday gift for a loved one or yourself. For more information or to join the festivities, visit www.ACSLVABOA.org. For tickets, contact Angela VanBrackle 702-891-9021.

Pedal your way into the holiday season by joining the Regional Transportation Commission of Southern Nevada (RTC) and City of Las Vegas Mayor Pro Tem Lois Tarkanian for the annual Holiday Bike Ride, at 8 a.m. Saturday, Dec. 8.  The family-friendly event offers a fun and festive morning bike ride while collecting new, unwrapped items for 98.5 KLUC’s 20th annual Chet Buchanan Show Toy Drive that is located in the NV Energy parking lot and provides gifts to local children for the holiday season through HELP of Southern Nevada.

As the region’s metropolitan planning organization, the RTC encourages alternative modes of transportation, such as cycling, and this leisurely ride will introduce cyclists to a bike-friendly area of Las Vegas, which includes a dedicated bike lane. Participants are asked to bring an unwrapped toy and join local cyclists in festive holiday attire and a decked-out bicycle to deliver holiday cheer. This fun 10-mile roundtrip ride will promote the holiday spirit with prizes for the most festive holiday attire or bike decorations.

The Las Vegas Men’s Chorus (LVMC) will perform a new holiday concert under the direction of Ryan Duff, the 2017 Heart of Education award recipient. The Chorus will sing arrangements of the most iconic holiday songs, including songs popularized by Linda Eder, Michael Bublé,  Stephen Schwartz, and many more.

The chorus will also be collecting donations of hygiene products and other necessities in support of Project 150, which helps local, homeless students.  The Concert will be held 4:00 p.m. Sunday, De. 16,  at The Space at 3640 Cavaretta Court near Polaris Ave. 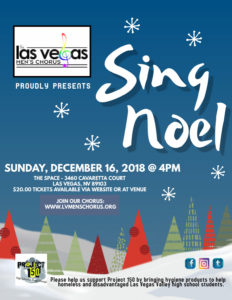 “The Las Vegas Men’s Chorus is excited for this amazing concert and our commitment to help our community’s youth,” said Mike Winget, president of LVMC. Our music will inspire goodwill and bring additional awareness and resources to local homeless teenagers. LVMC provides musical arts and education to Las Vegas and the chorus will remain committed to continuing to do it.”

The Las Vegas Men’s Chorus was established in the early 90’s by a small group of men looking to bring the choral sound of men’s voices to the Las Vegas Community. The Chorus is a non-profit ensemble whose members sing together with the purpose of creating musical experiences, providing cultural enrichment, and promoting social acceptance for its members, community, and audiences.

Well, gang, see ya at the Flamingo Library Sunday.