Solidifying their superstar status with yet another career milestone, GRAMMY-winning duo Dan + Shay have announced dates for their first ever headlining arena trek, Dan + Shay The (Arena) Tour. The 35+ date tour, presented by AEG Presents, will kick off March 6, 2020 at Bridgestone Arena in Nashville, TN and conclude October 31, 2020 at Tacoma Dome in Tacoma, WA. The tour also will include a stop at T-Mobile Arena here in Las Vegas on Saturday, Oct. 17, 2020.

American Express® Card Members can purchase tickets before the general public beginning today through Thursday, Oct. 10 at 10:00 p.m. pct./ Tickets go on sale to the general public starting this Friday, Oct. 11.  A limited number of VIP Packages will be available to purchase. These exclusive offers include an incredible selection of tickets and limited-edition merchandise created exclusively for VIPs. For complete presale details and ticket information, please visit www.danandshay.com. A complete list of tour dates can be found below.

Dan + Shay shared the touring announcement just days after unveiling a brand-new collaboration with one of the world’s best-selling pop icons, Justin Bieber, as their latest single “10,000 Hours.”  The duo’s Dan Smyers and Shay Mooney co-wrote the song with Bieber alongside Jessie Jo Dillon, Jordan Reynolds, and Jason “Poo Bear” Boyd. The undeniably catchy track was also produced by Smyers and promises a lifetime of learning and loving as his and Mooney’s flawless harmonies trade verses with Bieber’s smooth vocal.

In its first 48 hours of availability, “10,000 Hours” has already tallied more than 30-million streams globally. Ranked at #5 on Spotify’s Top 200 Global Chart and #2 on their Top 200 US Chart and has kept the #1 spot on the iTunes Top Songs chart since it was released, with the official music video reaching #3 on YouTube’s Trending chart, which includes all videos on YouTube.

Fans can expect to hear the duo’s growing catalog of hits from their most recent album Dan + Shay, which has held strong in the Top 5 on Billboard’s Top Country Albums chart all year, earning over two billion on-demand streams globally to date. In addition to a string of No. 1 hits, the album rewarded the duo with their first-ever GRAMMY award for Best Country Duo/Group Performance (“Tequila”), with their performance on the live broadcast becoming the most Shazamed song of the night. They were the-most awarded artist at this year’s ACM Awards, taking home three awards for Best Duo, Song and Single (“Tequila”), with Smyers earning an additional two for his work as a songwriter and producer. Earlier this year, CMT awarded them the Duo Video of the Year trophy for “Speechless” and recently announced their inclusion as one of the top country superstars of 2019 to be celebrated at their 10th Annual “CMT Artists of the Year” special, airing Wednesday, Oct. 16 at 8 p.m. ET/PT.

The duo just wrapped their time on Florida Georgia Lines Can’t Say I Ain’t Country Tour and will join superstar Shawn Mendes later this month on his self-titled tour in Australia.

Tommy T presents Earthquake Live for a six-week run at the world-famous Laugh Factory inside Tropicana Las Vegas. Earthquake Live! is performed Thursday-Saturday inside the renowned Laugh Factory, located on the mezzanine level of the Paradise Tower. All shows begin at 7:00 p.m.. Tickets are $49.95 for General Admission, $59.95 for a VIP Table and $69.95 for Golden Circle and VIP booths (plus applicable taxes and service fees), and can be purchased in-person at the Tropicana Las Vegas Show Tickets desk, online at www.troplv.com or by phone at 800-829-9034. Earthquake Live! is for ages 18 and up.

Comedian, actor and voice-artist, Earthquake earned a strong fan-base in stand-up comedy via programming platforms fueled by BET, HBO, Comedy Central, Showtime, and more. He entered America’s households on the classic run of BET’s Comic View and HBO’s Def Comedy Jam, wowing audiences with performances for HBO’s coveted 30-minute comedy special series, One Night Stand. A stand-up circuit favorite, Earthquake filmed a string of comedy specials, including About Got Damm Time, Walter Latham Presents, From the Outhouse to the Whitehouse, and more recently These Ain’t Jokes, which premiered on the Showtime Network.

“The Laugh Factory is thrilled to have comedy superstar Earthquake, opening his Las Vegas residency in our 320-seat venue,” Harry Basil commented.

‘Quake’ has also been a fixture of the Shaq’s All-Star Comedy Jam DVD Collections and various other comedy content collector’s DVD’s as well. The new resident comedian has enjoyed a string of cameo appearances on prime-time television as well. He is mostly known as the beloved ‘Uncle Mike’ from the hit sitcom, Everybody Hates Chris. Recently, he made a guest appearance on Bounce Network’s, In the Cut and the Wanda Sykes produced Face Value airing on the BET Network.

He has also blessed the talk show circuit with appearances on ABC’s The View, Fox Television’s The Real, TBS’s Late Night with Conan O’Brien, and many more; however, his most memorable appearances were on Howard Stern and HBO’s Bill Maher.

Quake’s film credits include animated favorite Barnyard, Something Like a Business with Kevin Hart, Getting Played with Vivica Fox, Ice Cube’s The Longshots and the Kevin Smith cult classic Clerks II. And he has provided inimitable voice work for Nike and Beats by Dre respectively.

The First Ladies of Songs and Comedy in Las Vegas, Elisa Fiorillo and Kelly Clinton are reprising their six-month residency show at the Italian American Club on Sunday, October 20, 2019 at 8:00 p.m. The two ladies first came together at another club about a year ago and are now considered by many as the best duo in our little village, and this writers personal favorites.

Produced by RainMaker Productions, Patrick Barney and Sue “Sam” Shockley, this show is just one of many productions to be presented by them. Their idea was to create a way to highlight the wealth of professional, and sometimes underutilized, local performers in the Las Vegas area. The two decided to place their shows under the banner of “Vegas Beyond the Strip” starting with the “Vegas Variety Show,” which featured a cast of eight or more and was offered at locations all over the Vegas Valley.

As many of you know Kelly likes to do the unusual at times. The common glue here, however, is they are both terrific singers, and both are a wee bit crazy (just kidding). The two ladies open the show with a song written and arranged by them for this show titled “Cool.” It’s a salute to some of the great ladies who have entertained in our little village over the years, and how two girls from the east, a blonde and a red-head, discovered each other after coming west and learning by watching the best teachers in the world entertain. You really need to listen to the words, gang, ‘cause it tells a story. Some of the other songs sure to be presented in this new venue includes  “Thank You for Being a Friend,” and “I’m a Woman” combined with “I Want to Make Love to You.”

And what is a singer or a song without a great live band? And, Kelly and Elisa, have three of the best: Michael Clark on keyboard, David Ramirez on drums, and one of the best guys any band would want on the bass-guitar, Dennis Blair.  Blair is a star in his own right as a vocalist and a stand-up comedian, and for 20 years he opened for the late, great George Carlin. He and Kelly go way back!

And, gang, the two ladies do some wonderfully funny impressions of the famous (and even none-famous) and will remain as a surprise as they are numerous and extremely funny. Thus, you’ll just have to go see the show.  Oh, and lest I forget, Dennis does his bit to help make a new impression really a fall-to-the-floor laugh.

Tickets are now on sale at http://www.rainmakerproductionslv.com with general admission priced at $25, and VIP Seating set at $35.  For further information  call  702-457-3866.

Long-time Las Vegas musician and entertainer Kent Foote will be presenting “The Bridge”, an Orchestral Benefit Concert this coming Sunday, Oct. 13, at the Orleans Casino Showroom at 6:00 p.m. This concert have a full 32-piece orchestra, conducted and arranged by Mariano Longo, and will benefit two of Las Vegas’ most respected and revered charities; The Trauma Intervention Program (TIP) of Southern Nevada Inc. and Nevada Health Centers. “The Bridge”, will collectively connect ethnicity, musical genres, charitable organizations and multi-generations of audience interests to create an atmosphere of collaboration and connectivity.  The Benefit Concert will feature acts including, Ariana Martinez-The Music of Gloria Estefan, Frankie Scinta-The Showman, Kent Foote and The Vegas Good Fellas, and Serpentine Fire-The Music of Earth Wind and Fire. 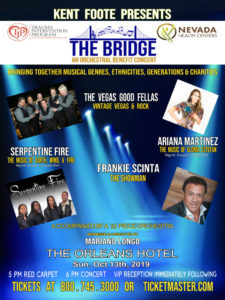 TIP provides emotional and practical support on scenes of tragedy at the request of emergency responders.  In 2018, TIP volunteers responded to just under 1,600 scenes of tragedy in Clark County where they assisted approximately 8,000 individuals in crisis.

For the fourth year in a row, magician Mat Franco will team up with Sunny 106.5 to host a pet supply drive benefiting The Animal Foundation, Nevada’s largest open admission shelter. Visit any Las Vegas-area PetSmart location between Monday, Oct. 7 and Sunday, Nov. 10 to purchase and donate a minimum of $10 worth of items from the organization’s wish list, or a PetSmart gift card of equivalent value, and receive one complimentary ticket voucher to see MAT FRANCO – MAGIC REINVENTED NIGHTLY live onstage in the Mat Franco Theater at The LINQ Hotel.

Since 2016, the annual campaign to collect supplies and monetary gifts has raised more than $16,000 in animal care supplies and monetary gifts for The Animal Foundation, and has helped care for hundreds of lost, unwanted and abandoned animals at the shelter — the largest in Nevada. The America’s Got Talent winner expanded his partnership with The Animal Foundation this year to help promote shelter pet adoptions during the busy summer season. The campaign, featuring Mat in print, outdoor, radio and television advertising, strengthened Mat’s partnership with The Animal Foundation and his commitment to helping some of our city’s most vulnerable residents, and aimed to encourage valley residents to adopt and not shop when looking for a new pet. 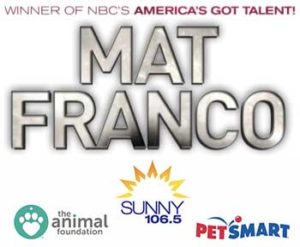 The wish list includes: New blankets, Dog and cat treats, Collars, harnesses, and leashes, Dog and cat toys, Canned food, Milk replacement formula for puppies and kittens, Nursing bottles for puppies and kittens, Beds & crates of all sizes, Treat-dispensing toys, and PetSmart gift cards. PetSmart has 13 convenient locations throughout the Las Vegas Valley, where purchases can be made and donated from The Animal Foundation’s wish list. One complimentary ticket voucher will be awarded per minimum donation of $10 worth of items, with a maximum of two vouchers awarded per transaction.