Well, gang, the Annual Las Vegas Book Festival kicks off this Saturday at 9 a.m. at the old 5th Street School, 401 South 4th Street, located across the street from the Federal Courthouse in downtown Las Vegas.  And, guess what? Yours truly, along with fellow author, Karen Leslie, will be there all day selling and autographing our respective books, “Four Planes Started, Only Two Finished” by me and “Eyes in the Sky” by Karen. Oh, yeah, I’m the cover boy on her book. 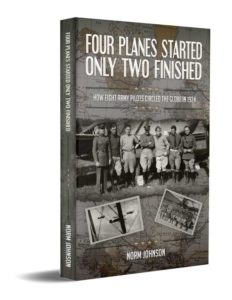 As you enter from the 4th street main entrance (Free parking will be offered all day Oct. 19 at the Lloyd D. George Federal Courthouse parking lot; enter on Sixth Street between Bridger and Clark avenues. Additional parking will be offered at the city parking garage for a $5 flat fee; enter on Third Street between Clark and Lewis avenues) you’ll see our booth right away. We will both be there in Booth #9, and from 10:00 a.m. till noon the “Mouse Pack” from her book will be on hand for autographs. The “Pack” are the six guys who revealed certain un-known stories in her book: Hotel executives Norm Johnson (me), Gene Sagas, Curt Thompson, and Dan Celeste, along with attorney Jerry Gillock Neon Sign executive Kent Carmichael. 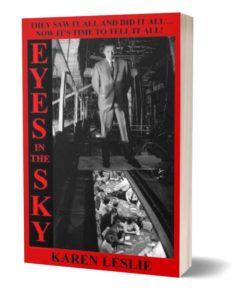 So, let me tell you a wee little story about the cover of “Eyes in the Sky.” In 1967 while I was working at the Mint Hotel as the Public Relations executive, we had all kinds of promotions, and one of them was a connection with Bonanza Airlines. We created a special package for all Bonanza passengers to visit the Mint casino during their stay in our Village. Well, we needed a photo for the cover of the package, and it was decided that I would become the “Eye in the Sky.” The photo-shoot accomplished by the Las Vega News Bureau took two days of planning how to get exactly the right shot. In those years there were men stationed above the casino floor with binoculars looking through panels of glass to catch cheaters.  They manned those stations 24-hours, seven-days a week.  Today they have video cameras everywhere. And, yes, that is me in a suit! Now you know the rest of the story.

Want to see Norm talk about his new book “Four Planes Started, Only Two Finished” with JC Fernandez on KLAS TV Channel 8? Click here or watch below to see the full interview.

In just a few years Jackie Fabulous has gone from a night club comic act to television actress, writer, producer and an internationally touring act. Having finished among the top 10 on the recent America’s Got Talent, Jackie will make her Las Vegas debut at the Laugh Factory inside the Tropicana Las Vegas this Thursday (Oct 17) through Sunday. She will be sharing the stage with Rocky Dale Davis and Kristi McHugh.

Jackie Fabulous, a Native New Yorker is a motivational speaker, author, comedian, actress, and law school graduate in Los Angeles who is built for TV. “The Arsenio Hall Show” 2014 reboot booked Jackie 5 times in the shows short TV return for her hilarious brand of comedy where you don’t see color you just see funny. “Jackie is hysterical! At one point I forgot she was Black!” Brad Garrett said.

Jackie is a gut-busting, headlining comedian who uses comedy to simultaneously entertain, encourage and empower audiences. Having survived her fair share of loves, tragedies, lessons and embarrassing moments, Jackie channels all of that energy into hilarious sets and inspiring keynotes. More than just a funny lady, she is on a mission to inspire and empower women all over the world to Find The Funny In Their Flaws. 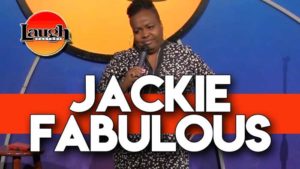 “As the guy who discovered Jon Stewart, Ray Romano and a bunch of other star comics I have a sense of who has ‘it.’ Jackie Fabulous has it. I’d watch her do just about anything legal,” commented Billy Grundfest (Founder of New York’s “Comedy Cellar”).

When Jackie is not on tour, you will ﬁnd her giving amazing keynote speeches and breakout sessions at corporate events and conferences. A lawyer in her past life, she understands the plight of the working woman. Her signature talks and upcoming book within her hilarious “Find Your Fabulous” series will leave audiences feeling encouraged and inspired to conquer the ups and downs of life and work. Her diverse style of comedy has allowed her to work with comedy legends like Roseanne Barr and Wanda Sykes and on the OWN Network, NBC, CBS and FOX to name a few.

“Your Flaws Are Fabulous” Mission Statement To inspire and encourage women all over the world, showing them how to ﬁnd the funny in their ﬂaws.

The Super Summer Theatre announces the fall/winter season In City Series from October 2019 through March 2020. Held at Super Summer Theatre Studios, the season kicks off with “Death is a Drag,” beginning Thursday, Oct. 17. Experience the intimate thrust style theatre, boasting productions with the same flair and talent held during the summer season. Tickets for the In-City Series are $20 for general admission. The lobby opens at 6 p.m. with seating at 6:30 p.m. Show time is 7 p.m. The studio is located at 4340 S. Valley View, Suite 208 Las Vegas, NV 89103.

The 2019 – 2020 In City Series lineup: Thursday, October 17 – Sunday, November 3: Death is a Drag presented by Super Summer Theatre and Dime a Dozen Productions. Come meet the zany family and friends as they try to say goodbye to “Sharon DeWealth,” a true legend in his/her own mind and still won’t go quietly. Feel the fabulousness for yourself. Audience is encouraged to dress in costume. Bert Anderson and Dolly Coulter (creators of Dime A Dozen Productions) are also SST alumnus. They were last seen at the ranch in “Oliver,” “Jesus Christ Superstar” and “The Wiz” and “Smokey Joes Café.” This (other) dynamic duo has also written and composed a children’s radio show, “Bixby’s Tales,” “Back Up The Legendary Musical” (a behind the scenes view from the back-up singers and dancers to a Hollywood big star. Their current work “Art Versus Life” is a dramatic musical about Degenerate Artists (as Hitler called them) in 1930s Bohemian Berlin. How they created marvelous works of art in the midst of such chaos and oppression.

Thursday, December 5 – Sunday, December 15: House of Tomorrow, presented by Super Summer Theatre and Speeding Theatre: House of Tomorrow weaves together humorous, yet poignant, stories about seniors taking strength from their yesterdays, pursuing the passions of their tomorrows, opening the doors and windows of their lives (AKA their houses) to remodeling and keeping their dreams big and their hopes high. You’ll meet seniors navigating the uncharted waters of online dating, trying in vain to order a refill from a mail order pharmacy, responding to adult children concerned about driving safety, experiencing the stresses of forced downsizing and see how  one senior’s view of a weekend together differs hilariously from her daughter’s take on it—as  well as other fun stories about seniors undaunted by the challenges life keeps throwing at them!

Thursday, January 30 – Sunday, February 16: First Date: presented by Super Summer Theatre and Hynes-Sight Entertainment:  When blind date newbie Aaron is set up with serial-dater Casey, a casual drink at a busy New York restaurant turns into a hilarious high-stakes dinner. As the date unfolds in real time, the couple quickly finds that they are not alone on this unpredictable evening. In a delightful and unexpected twist, Casey and Aaron’s inner critics take on a life of their own when other restaurant patrons transform into supportive best friends, manipulative exes and protective parents, who sing and dance them through ice-breakers, appetizers and potential conversational land mines. Can this couple turn what could be a dating disaster into something special before the check arrives?

Super Summer Theatre is a non-profit organization with the mission to promote the use of Nevada State Parks by providing quality, family-oriented and reasonably priced cultural entertainment to the community, including theatrical arts educational opportunities. The outdoor theatre is at Spring Mountain Ranch State Park and indoor theatre is located at the ViewPoint Center located at 4340 S. Valley View Blvd. The season now runs year-round June through September at the Bowman Outdoor Pavilion located at Spring Mountain Ranch State Park and November through March in the SST Studios for the Performing Arts.

The Shade Tree, a 24-hour accessible shelter designed to specifically meet the needs of women and  children in crisis, is once again hosting a “Trunk ‘R Treat” event on Thursday, Oct. 31, so the children  who are living at the shelter will be able to dress in costume and trick ‘r treat by visiting the cars  of staff and volunteers parked safely behind the shelter’s gates.  The Shade Tree is asking the public to donate costumes and candy, ensuring the children will have a happy Halloween.

According to Linda Perez, CEO, The Shade Tree, the Trunk ‘R Treat concept is the perfect way to allow the children to experience the joy of Halloween in a safe, controlled environment. The shelter houses approximately 50 children living at the shelter, ranging from infants to 18-years-old. The shelter is seeking costumes and accessories in a variety of sizes, as well as candy for volunteers and staff to hand out on Halloween. To make a costume or candy donation, call 702-385-0072 or send email to Jordan Berkowitz at [email protected]. Donations may also be dropped off at The Shade Tree, 1. W. Owens Ave., North Las Vegas, 89030.

The Shade Tree is Southern Nevada’s only 24-hour accessible emergency shelter for women and children in crisis, servicing many who are victims of domestic violence and/or human trafficking. The Shelter offers 364 permanent beds and provides over 100,000 nights of shelter over 165,000 meals every year. On average The Shade Tree provides assistance to 15 new families each day and helps over 6,000 women and children annually. The facility offers residential areas with sleeping rooms, libraries, training rooms, children’s playrooms, meals, and laundry services. Additionally, it offers programs and services for women and children including life skills, workforce readiness, health services, and housing assistance. The Shade Tree has been providing these services since 1989. To learn more, follow The Shade Tree on Facebook @ShadeTreeofLasVegas and Twitter & Instagram @ShadeTreeVegas or visit www.theshadetree.org.

Well, gang, hope to meet you during the Book Festival. Remember we, Karen and myself, will be there until closing at 6:00 p.m. And ,oh, yeah, a friend of mine will be in booth #11, Heidi Harris with her new book, and Linda Smith founder of Opportunity Village will be in booth #4. Just a few of the locals who be on hand. By the way there will be plenty of food available.