Slowly the Las Vegas Strip is returning to its glory days of fantastic entertainment in the showrooms, nightclubs, and lounges. One of them showed its powers over the weekend: Early Sunday morning brought on the second sold out show in a row at the iconic Drai’s Nightclub with an explosive performance by Grammy-award winning artist, Future. The show was the second full-length live concert on the Las Vegas Strip since early spring 2020, following multi-platinum Grammy and Golden Globe-nominated superstar Wiz Khalifa’s performance at Drai’s early Saturday morning.

“We’ve looked forward to this weekend for well over a year and it was thrilling to bring live music back to the Las Vegas Strip with back-to-back sold-out shows by Wiz Khalifa and Future,” said Dustin Drai, vice president of entertainment and marketing at Drai’s Beachclub • Nightclub. “Both artists and the fans brought energy unlike anything I’ve ever experienced, making this weekend’s grand reopening not only an unforgettable party, but also one for the Vegas record books.”

The whole crowd was on their feet as Future hit the stage around 2:30 a.m. with DJ T-Jizzle. Along with performing some of his Billboard chart topping hits like “Mask Off,” Future performed fan favorite songs such as “March Madness,” “Stick Talk,” and “Commas.”

Both performances electrified audiences of more than a thousand fans who packed the rooftop nightclub, located in the middle of the Strip at the corner of Las Vegas Boulevard and Flamingo Avenue at The Cromwell. Both shows were part of Drai’s official grand reopening celebration and the return of Drai’s LIVE, the nightclub’s groundbreaking live music series.

Drai’s Beachclub • Nightclub takes entertainment and nightlife to new heights in an unmatched setting – 11 stories high on the rooftop of The Cromwell with dazzling views of the Las Vegas Strip. Drai’s Beachclub is a 30,000-square-foot oasis with multiple pools shaded by 10 towering palm trees, a variety of cabanas and bungalows, and two full-service bars. Inside, Drai’s Nightclub is a 25,000-square-foot palatial, multi-level club with an expansive dance floor, massive LED lighting systems, and modern technology featuring more than 7,000 square feet of the most state-of-the-art high-definition LEDs in production, including a towering 80-sided LED disco ball – the only one of its kind. Drai’s Nightclub is home to Drai’s LIVE, an unprecedented concert series that provides fans with the opportunity to see full-length performances by top performers like Wiz Khalifa, Future and 2 Chainz in an up-close setting unlike anything else in the world.

Future’s album “Pluto” featured five singles in the Billboard 100, and his third album “DS2” landed him his very first Billboard 200 #1 ranking. Future has worked with many big names over the years and in 2015 dropped “What a Time to Be Alive with Drake,” featuring top hits like “Jumpman” and “Big Rings.”

After a multi-day transformation, The Island at Ellis is ready to make its tiki debut. Taking over the second floor of The Front Yard at Ellis Island Hotel, Casino & Brewery, the one-month-only mid-century tiki dream has opened its doors.  Serving up a specialty menu with tiki-inspired food and cocktails, guests can enjoy dishes such as a Teriyaki Chicken Burger, Tiki Quesadilla, and Coconut Shrimp, only available on the second level of the restaurant, as well as 10 boozy island-themed specialty drinks: beer cocktails, Ellis Island spins on Tiki classics, multiple served as individual cocktails or in punch bowls for a crowd. In addition to the tiki menu, guests will be greeted by a 15-foot swordfish, staff decked out in Hawaiian-themed attire and tiki-style vignettes throughout the space, along with two blackjack  tables and a variety of slots. The Tiki Bar will be open Saturdays and Sundays from 10am to 3pm and 4pm to midnight; Mondays from 10am to 3pm and 4-10pm; and Tuesdays through Thursdays from 4-10pm.

Reservations are available through OpenTable and people can follow this special pop-up on Instagram at @islandatellis. The second floor of The Front Yard at Ellis Island, 4250 Koval Lane, Las Vegas, NV 89109

The Front Yard is a two-story indoor/outdoor beer garden, providing a casual brewpub atmosphere in the heart of Las Vegas. With a premium bar and a full-service restaurant, The Front Yard offers some of the Ellis family’s favorite recipes along with dishes curated by Executive Chef John Ales, providing a little something for everyone. Retractable ceiling shades, expansive windows, and Instagram-worthy garden walls present a lush outdoor atmosphere where patrons can come together for brunch on the weekend or enjoy a game on the restaurant’s 18-foot big screen. The Front Yard is open for dinner daily from 4 p.m. to 11 p.m. Monday through Wednesday and 4 p.m. to 12 a.m. Thursday through Saturday. Brunch is served Saturday through Monday from 10 a.m. to 3 p.m. The Front Yard is located at 4178 Koval Ln, Las Vegas, NV 89109 and can be reached by calling (702) 733-8901. Follow The Front Yard on Instagram and Facebook at @thefrontyardlv. Conveniently located one block east of the Las Vegas Strip on Koval Lane behind Bally’s, Ellis Island is a must-see destination for every Las Vegas visitor and local. 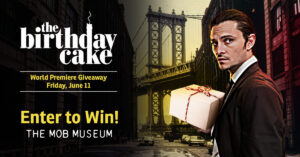 “The Birthday Cake” takes place one fateful evening in the life of Gio, the son of a murdered mobster and the nephew of Brooklyn mob boss, Angelo. On the 10th anniversary of his father’s mysterious death, Gio carries on the family tradition of bringing a cake his mother baked to this uncle’s house for a celebration. Two hours into the night, Gio’s life is forever changed as he begins to piece together what really happened to his father and ultimately comes face to face with the type of violence he has managed to avoid his whole life.

The Mob Museum will host an exclusive ticket giveaway for the VIP world premiere at www.themobmuseum.org/birthday-cake-sweepstakes/. Four lucky winners will receive two passes to the screening, entry for two to a VIP reception and a meet-and-greet with select members of “The Birthday Cake” cast. One grand prize winner will receive all of the above, plus a two-night stay at The Cosmopolitan. 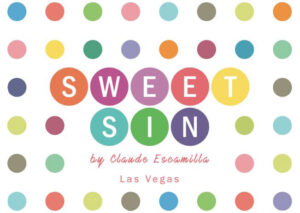 Award-winning, internationally acclaimed pastry chef Claude Escamilla has opened an entirely reimagined pastry shop, SWEET SIN, at The LINQ Promenade. With an enormous, handcrafted chocolate fountain as its centerpiece, the location represents the first eponymous European-style pastry shop for Escamilla, who previously served as executive pastry chef on the Las Vegas Strip for 17 years. SWEET SIN is situated between the entrance to The LINQ Hotel + Experience and Chayo Mexican Kitchen + Tequila Bar on the Promenade.

SWEET SIN boasts new décor, featuring a sleek, white pastry display case handcrafted in Italy and a brilliantly polished, towering chocolate fountain custom-made by elite artisans in France. The chocolate fountain is composed of three, 7-inch-diameter, curvilinear pipes that cross the ceiling, culminating in three taps behind the pastry case. Each tap dispenses a different, irresistible variety of chocolate—dark, white, or caramel—which is poured before customers’ eyes onto menu items such as crepes, chocolate-dipped strawberries, and hot chocolate.

From the ceiling, more than 50 whisk-shaped pendant lights hang suspended above guests as they browse the shop’s offerings. Adorning the walls are cheerful polka dots in bright hues of raspberry, tangerine, lemon, lime, turquoise and plum, as well as playful phrases spelled out in neon script. Meanwhile, an elaborate, rotating case displays an artistic assortment of 400 handmade macarons in every color of the rainbow, as well as sweet souvenirs and other SWEET SIN by Claude Escamilla merchandise.

In addition to macarons and crepes, the shop offers 13 flavors of gelato, omelets, breakfast sandwiches, sweet and savory pastries, a tempting array of homemade European desserts and traditional coffee beverages as well as cold brew coffee on draft.

Well, gang, recently I made a visit to the Strip on a Saturday evening to see for myself just how busy it really was.  Well, I had to search high and low (kidding) to find  a parking spot.  Seriously the hotel I was going to had closed down its valet service and some of its parking lot space.  Why?  Who in the heck knows why this particular hotel does things?  It certainly isn’t doing itself any favors,’