Legends in Concert ended its longest intermission in the shows storied history, as its multi-year engagement resumed Thursday night (June 17, 2021) in its iconic home at Tropicana Las Vegas. And what a show it is, gang!

Having suspended operations for the first time in its 38-year history in Las Vegas due to the pandemic, the most-awarded show of its kind is welcoming back guests and will be providing a safe environment to experience live performances of world-class entertainment. The show actually had already been open and held its media opening and reception Thursday.

Legends in Concert continues to celebrate the world’s most famous and influential icons, many gone too soon, giving audiences an extraordinary chance to experience the most captivating music, fashion and memories of these true legends live on one stage. The acclaimed production also dazzles fans with six beautiful dancers: Cassie Silvia (captain); Jessie Ohera-Aweau; Carrie Strothers; Kelsey Johnson; Kaleigh Jones, and Ciara Cornett, in historic showgirl costumes curated directly from famous Vegas productions of the past, creating a special tribute to the showgirl glamour that is synonymous with the Entertainment Capital of the World.

The tribute artists perform using their own natural voices and are backed by a live four-piece band that rocks the house: Howard Stroman is the musical director/bass; Jimmy Powers on guitar; David Ramirez hitting the drums, and on the ivories Roberto Vazquez, and two fabulous back-up singers Tony Torres and Deena Cary. The combination of dancers, sensational showgirls, a great band, and singers brings the performances to life.  The choreography is outstanding as are the historic and fabulous costumes from the past, just helps to make the entire experience everything one would expect in a Las Vegas showroom.

Legends in Concert is celebrating 38 years of success this year and claims the title of longest-running show in Las Vegas. Owned and operated by On Stage Enterprises, the show made its debut in 1983 at the old Imperial Palace where it stayed until moving to Harrahs briefly, and then to the Tropicana. 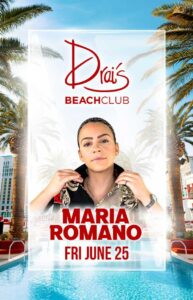 Drai’s Beachclub • Nightclub is bringing back Swim Night, a nighttime pool party experience unlike any other. Found 11 stories high, this weekly party takes place on the rooftop pool at The Cromwell, surrounded by the lights of the Las Vegas Strip. Every Thursday night throughout the season, partygoers are invited to dance the night away to some of today’s hottest hits with performances by fan-favorite DJs and artists.  Local favorite and frequent Drai’s performer, DJ Maria Romano, kicked  off the first Swim Night of the summer this past Thursday at 10 p.m.

Drai’s Beachclub • Nightclub spans 65,000 square feet and features multiple pools shaded by towering palm trees, a variety of cabanas and bungalows, two full-service bars, specialty craft cocktails, a gourmet kitchen and bottle service. Drai’s Beachclub is open daily from 11 a.m. to 5 p.m. and Drai’s Nightclub is open Friday through Sunday from 10 p.m. to 3 a.m., in addition to Thursdays for Swim Night throughout the summer. Tickets and VIP table reservations are available on the website at  www.draisgroup.com. Other special requests are available by emailing [email protected]. 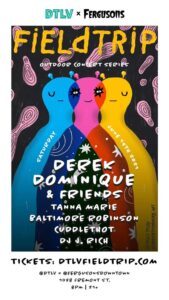 Following the success of its first outdoor concert over Memorial Day weekend, @DTLV, in partnership with Fergusons Downtown, has announced Field Trip as a bi-weekly concert series throughout the summer. The festival will take place every other Saturday at Fergusons Downtown, a city block rooted in community, celebrating local music, art, and creators, from 8 p.m. – 1 a.m. starting on Saturday, June 19.

With more than 650 attendees at its first concert in May, the revitalized Fergusons Motel and @DTLV, a Downtown Las Vegas community Instagram platform, will launch its open-air evening excursion with a diverse group of Las Vegas performers. Entertainers over the summer will include versatile singer and rapper, Derek Dominque; smokey R&B singer, Tanna Marie; evocative singer, rapper and producer, Baltimore Robinson; laidback rapper and singer, Cuddlethot; and beats from DJ Jazlyn Rich. Field Trip’s Saturday, June 19 event will serve as an afterparty to Fergusons Downtown’s Pride Month and Juneteenth Market in the Alley, which will highlight local LGBTQIA+ makers and artists.

Additional Field Trip dates will include Saturday, July 3, July 17, and July 31, with more dates to be released in August. Guests may sign up for a limited, complimentary guest list at dtlvfieldtrip.com. Tickets will be $10 once the guest list is filled or when purchased on-site. Bites from some of Las Vegas’ favorites will be available on-site, including Paradise City Creamery, which will serve decadent plant-based ice cream, along with Vegas Test Kitchen, located next to Fergusons Downtown, which will serve a variety of chef-driven menus.

“It’s been a challenging year, especially for musicians, and the first Field Trip concert was the first time most of these artists had performed for a live audience in over a year,” said @DTLV editor, Zoneil Maharaj. “We’re excited to be giving musicians a platform to return to and bring the community together through music.”

The STRAT Hotel, Casino & SkyPod will honor Independence Day with a spectacular celebration unlike any other with unbeatable views of the fireworks show on the Strip and a patriotic tribute on its iconic tower. In addition to astounding views of Las Vegas’ unprecedented fireworks show from the rooftops of several Las Vegas casinos, The STRAT will host the highest fireworks launch site on the Strip from its 1,149-foot-tall tower. The highly anticipated fireworks show will begin at 11 p.m. The STRAT’s tower itself will be illuminated in red, white, and blue as a patriotic salute starting at dusk.

The SkyPod at The STRAT features 108 Eats and 108 Drinks, plus 360-degree views of the Las Vegas Valley; the 106th level, which includes the rotating Top of the World restaurant; and its popular thrill rides which offer breathtaking views of fireworks displays throughout the Las Vegas Valley. Special tower entry for firework viewing will be priced at $40, beginning at 7 p.m. More information is available at TheSTRAT.com.  Free self-parking and valet are always available at The STRAT Hotel, Casino & SkyPod. 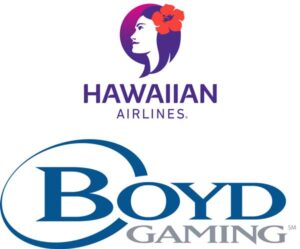 Effective today, Boyd Gaming and Hawaiian Airlines loyalty members will enjoy reciprocal earning and redemption benefits with Boyd Gaming’s B Connected Points and the airline’s HawaiianMiles program. The partnership provides customers with greater access to B Connected’s exciting selection of reward tiers, exclusive player benefits and memorable entertainment experiences, as well as more ways to earn and use HawaiianMiles – making membership in both loyalty programs more attractive and valuable than ever.

“Hawaii is an incredibly popular destination among Boyd Gaming customers across the country, and Hawaii residents love nothing more than a trip to the ‘Ninth Island’ of Las Vegas,” said Matt Ryan, senior vice president and chief marketing officer of Boyd Gaming. “Through this new partnership, we can offer Boyd Gaming guests valuable rewards for their next excursion on Hawaiian Airlines – no matter which way they are going.”

“It’s no secret our guests have a strong affinity for Las Vegas and Boyd Gaming properties, so we’re thrilled to offer our HawaiianMiles members more value through reciprocal program benefits,” said Danica Wong, director of HawaiianMiles at Hawaiian Airlines. “We also look forward to welcoming more B Connected customers onboard to experience our signature Mea Hoʻokipa (I am host) service as they travel to our island home.” 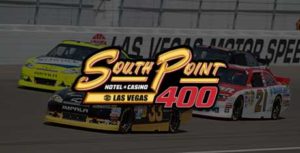 September’s NASCAR Weekend in Las Vegas will run with no capacity restrictions, speedway officials have announced.  In accordance with the decision by the state of Nevada and Clark County to lift all restrictions that went into effect June 1, LVMS plans to have all seats available for the September 23-26 weekend that is headlined by the South Point 400.

“We’re beyond thrilled that we’ll be able to open the grandstands to full capacity this fall,” said LVMS President Chris Powell. “We’ve been working to get back to normal for several months now and knowing that we won’t be turning fans away because of social-distancing requirements has energized our entire staff.  We can’t wait to welcome our race fans back to the speedway.”

Tickets for the four-day weekend are on sale now at LVMS.com. The four-day weekend kicks off on Thursday, Sept. 23 with the Star Nursery 150 ARCA Menards Series West event at the Bullring. The action shifts to the superspeedway on Friday, Sept. 24 for the NASCAR Camping World Truck Series event followed by the Alsco 302 NASCAR Xfinity Series race on Saturday, Sept. 25. The weekend concludes with the fourth annual South Point 400 on Sunday, Sept. 26. All four races will be run under the lights.  Information on RV lots, Neon Garage access and other fun extras will be coming soon.

I hope you get a chance to catch one of the Legends shows at the Tropicana Las Vegas, and don’t forget the Laugh Factory located on the mezzanine level of the hotel/casino.