Well, gang, forgive me but the lead article this week will be about an author I’m very well acquainted with—Me, Norm Johnson. A book I had published back in 2006 that sold a few thousand copies and then went thud is back alive.  I have no idea why the first book never really got off the ground. I’m sure the publisher at the time would’ve loved to have seen it become a “best seller,” but it never happened.  Anyway, I have revived it with new photos, better editing, some additional material, and a fantastic new cover, conceived by my webmaster and friend Tyler Berlin, and a new title.  Anyhow the cover is within this column.

“Four Planes Started, Only Two Finished” is the new title of the telling story of the first flight around the world in 1924. It involves four Donald Douglas Biplanes, eight United States Army aviators and more drama than a fiction writer could dream up. In flimsy, open cockpits these eight brave men defied all the elements, even the opposition and derision of their contemporaries. Ultimately they defied death itself!  Those who helped make it a success, which included the United States Navy, the Japanese Navy, British Navy, and hundreds of men and women who helped them return to where it all started, Seattle, Washington. It was not easy.

The four Donald Douglas built air cruisers flown are the kind you find in air museums today. They are ancient, primitive, and frightening compared to our modern ships of the air and space. If a pilot were to be asked to fly one of them  today, he would laugh and walk away shaking his head. Yet, these flying machines were the forerunner of planes used during World War II, and all the battles that have followed. In those flimsy, open cockpit airplanes, men defied all the elements, even the opposition and derision of their contemporaries. They defied death itself. For four it meant facing death head-on and surviving.

The first journey around the world lasted 175 days, when it was planned for only 45. Every day was an experience filled with anxiety and fraught with danger? They accomplished what many critics of the Air Service, and even those within the Army along with many politicians, said could not be done. They flew around the world for the first time in the history of man and flight. They were a remarkable and surprising band of men, a strange mixture brought together by the circumstances of the time. Each had their own motive for risking life and limb on a pioneering mission. Much like our first astronauts, they would be flying into the unknown. The astronauts of today face death every time they blast into space. In 1924 their flight was a tale of courage, patriotism, ingenuity, perseverance, and high drama more enthralling than any fiction writer could possibly dream up as a plot line. Its success was more a tribute to collective daring than the development of aeronautical sciences in the early days of flight.

Just a few of the highlights of my masterpiece (joke) include details of Major Fred Martin and Sgt. Alva Harvey when they crashed The City of Seattle World Cruiser in the ice-cold mountains of Alaska: The high spirited four-ton cruiser clung to life for a scant second before the left pontoon impacted against the mountain; she skidded along the sparsely covered mountain like a skier. The wings began to tear away, the propeller exploded as the plane carrying its two occupants careened up the mountain. It would be 10 horrifying days before they would reach civilization. Lt. Leigh Wade piloting the City of Boston along with co-pilot Lt. Henry Ogden were flying at 1000 feet over the North Atlantic when the oil pressure suddenly registered zero and smoke poured from the engine. Wade peered below in an effort to determine the direction of the waves. The wind grabbed at his face as the cruiser ascended towards the sea. They were rescued by the United States Navy, as the Boston sank.

Today in an age when men have been to the Moon and back, and mechanical rovers are traversing Mars, it is easily possible to forget a time many years ago when a journey of any distance by airplanes was truly difficult.

This is that Story. I must tell you it reads like a novel, as I created conversations between the various men and women in the book. The fact that my research took over 20 years alone should help you in deciding to read the book, but that I actually met and talked with three of the flyers is how I was able create conversation. No other book can say that! 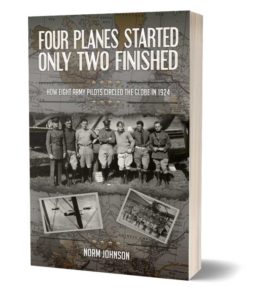 The book, soon to be published in paperback (approximately 2 to 3 weeks) is now available on Amazon Kindle. If you want to purchase it on eBook and have a good read please do. We priced it at $4.99. The paperback, which will also be on Amazon, will also be able to be ordered through me, and of course will be personally autographed to you by yours truely.

So, gang, this is your chance to help me out by going to the Amazon link here and spending a couple of dollars to help a poor columnist. If you would please forward this to all your friends and ask them to forward to their friends. It will sure help.  Thanks gang!

Bob Zany will be headlining all this week at the Laugh  Factory inside the Tropicana Las Vegas, along with Felicia Michaels, and Mike Favorman with two shows nightly at 8:30 and 10:30 p.m..

In 1976, he made his first television appearance as a contestant on The Gong Show. Between that time and a 1986 appearance on the TV special George Schlatter’s Comedy Club, he had gained a significant amount of weight, which he was able to lose by the time he appeared as a contestant on To Tell the Truth in 1990. Today he is rather slim, depending of course on what he had for dinner the night before.

Zany now appears weekly on the nationally syndicated radio program The Bob & Tom Show, and has his own segment called The Zany Report. Bob also had a small role in the film Joe Dirt as the guy at the radio station who pushes Joe down at the beginning of the movie.

On September 16, 2006, he appeared on the Comedy Central special, The Friends of the Bob and Tom Show. He has made numerous guest appearance over the years including Last Comic Standing. He made it through the initial interview but was not passed on to the next round.  Zany appeared in the film The Informant. Zany toured Israel with the Comedy for Koby show, hosted by the Koby Mandell Foundation.  The group performed in Jerusalem, Tel Aviv, Raanana, Beit Shemesh, Haifa, Modi’in, and Gush Etzion.

Bob can also be seen in his documentary film, Close But No Cigar, directed by Jay Kanzler, which chronicles his thirty-plus years in show business. It contains interviews with Ralpie May, Jimmy Pardo, Andy Kindler, Nia Peeples, and Carrot Top to name a few. He is a three-time nominee for Annual American Comedy Awards Best Male Standup Comic.

Global Power Elegance Business Networking Group event, being held by its founder, Margie Shepherd, is open to the public, and among many subjects on the agenda is “Elegance is not about being NOTICED. . . It’s about being REMEMBERED! This premiere event will take place on Thursday, Aug. 22, at 11 a.m. inside the popular Pasta Mia restaurant, 4455 W. Flamingo, 89103.

“Inspiration Has More Power Than Motivation!  Inspiration is the fire that lights the motivation and holds the momentum to persist to the end to get the desired results,” Shepherd explained.. 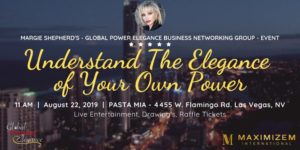 Margie Shepherd’s Six-Decade career is an inspiration itself, as she points out: an inspiration is what makes people become more creative, they think differently, act differently, achieve differently, they stand up and stand out rather than blend in to simply achieve the “norm“.  She goes on to ask, “How inspired are you or how inspiring are you as a manager or leader of others – It’s easy to find inspiration when you know where to look. . . Imagine what you could accomplish if you taught your people how to inspire themselves. . . You would see more independent thinking, courage, greater initiative, creativity and innovation, an improved culture and increases in productivity and results.”

“Knowledge is not a passion from without the mind, but an active exertion of the inward strength, vigor, and power of the mind.  Live Life On Your Terms  Personal style is about having a sense of yourself and what you believe in every day.  Style is very personal.  It has nothing to do with fashion. Fashion is over quickly. Style is forever!” Margie Shepherd concluded.

This should be a very interesting gathering, as I personally know  a few who will be attending.

The Neon Museum announces tickets are now on sale for  “Lost Vegas: Tim Burton @ The Neon Museum Presented by the Engelstad Foundation,” which will be on view Oct. 15 through Feb. 15 from 9 a.m. to 1 a.m. daily. Tickets will be priced at $30 for general admission to the Neon Boneyard and $24 for admission to the nighttime, projection-mapping spectacle “Brilliant!” No paired tickets or discounts will be offered for the duration of the exhibition. Tickets may be purchased at neonmuseum.org.

“Lost Vegas: Tim Burton @ The Neon Museum Presented by the Engelstad Foundation” will comprise sculptural and digital installations celebrating Burton’s link to Las Vegas’ historical neon heritage. These artworks, many of which will be site-specific creations, will be displayed in the Neon Boneyard and incorporated into “Brilliant!” Works will play with the museum’s landmark sign collection, which was prominently featured in Burton’s film Mars Attacks! This irreverent homage to the sci-fi B-movies of the 1950s and 1960s and the disaster films of the 1970s unleashed gleefully destructive alien invaders upon gamblers, casino workers and Tom Jones. The presentation of Burton’s art in Las Vegas represents a unique experience where the host institution also serves as creative inspiration. The museum’s distinctive campus will be transformed through the artist’s singular vision for this original exhibition. of new work as well as previously exhibited pieces.