American icon Willie Nelson will headline a limited Las Vegas engagement, “Vegas On My Mind,” at The Venetian® Resort Las Vegas inside The Venetian Theatre, presented by SiriusXM, October 18, 19, 22, 23, 25 and 26 at 8 p.m.  Tickets starting at $59.95, plus applicable fees, are now on sale to the general public, a limited number of VIP packages are also be available. Tickets will be available for purchase at www.Ticketmaster.com, venetian.com, any box office at The Venetian Resort or by calling 702.414.9000 or 866.641.7469.

This reporter first met Willie in the mid-seventies when I was working for Steve Wynn at the Golden Nugget. I was the publicist for the hotel, and also assisted in booking entertainment. At the time we had Waylon Jennings as a regular special guest in the lounge, along with a great bunch of other country entertainers including Johnny Paycheck, Judy Lynn, and Barbara Mandrell. Waylon kept telling us about a singer we should book into the lounge. “He’s not very well known outside of Nashville, but I think he’s about to explode and become a major entertainer,” he was telling Mr. Wynn and I as we sat in the lounge. Yes, folks, in those early years Wynn would be all over the casino.

Well, we went ahead and booked him per Waylon’s recommendation. Willie’s first paycheck was for $5,000 a week. Waylon discovered that we were paying him the same, and when we went to sign him for his next appearance, the sly country singer said: “I want a hundred more than Willie.” Well of course we made the deal. Next time Willie requested $100 more than Jennings. This went on for nearly a year.  It was a big joke between everyone.

One other short story about Mr. Wynn pertaining to country entertainers. Every one of them were presented with a set of silver six-shooters, holster and all.  It became a tradition.

With a six-decade career and 200 plus albums, this iconic Texan is the creative genius behind the historic recordings of Crazy, Red Headed Stranger, and Stardust. Willie Nelson has earned every conceivable award as a musician and amassed reputable credentials as an author, actor, and activist. He continues to thrive as a relevant and progressive musical and cultural force. In recent years, he has delivered more than a dozen new album releases, released a Top 10 New York Times’ bestsellers book, again headlined Farm Aid, an event he co-founded in 1985, received his 5th degree black belt in Gong Kwon Yu Sul, headlined the annual Luck Reunion food and music festival at his ranch in Luck, TX during SXSW, launched his cannabis companies Willie’s Reserve and Willie’s Remedy, and graced the covers of Rolling Stone and AARP The Magazine. In 2015, Nelson published “It’s A Long Story: My Life,” the unvarnished and complete story of his life that landed him on the New York Times’ bestsellers list. He also released a new studio album with Merle Haggard titled Django And Jimmie, which debuted at #1 on Billboard‘s Country album chart and #7 on Billboard‘s Top 200 album chart.

In November 2015, the Library of Congress honored him with their Gershwin Prize for Popular Song for his contributions to popular music. He is the first country artist to receive the distinguished award. The following year began with the release of Summertime: Willie Nelson Sings Gershwin, a collection of 11 newly recorded Gershwin classics. The album debuted at #1 on both the Top Current Jazz chart and the Top Traditional Jazz chart, as well as earned him a Grammy Award for the Best Traditional Pop Vocal Album. In 2018, he released Last Man Standing in April to celebrate his 85th birthday. It is comprised entirely of songs newly-penned by Nelson (and longtime collaborator and producer Buddy Cannon). In September he released the album My Way, a collection of newly recorded standards and classic originally made famous by Nelson’s close friend and musical colleague Frank Sinatra. It went on to win the GRAMMY Award for Best Traditional Pop Album. For 2019, he will release Ride Me Back Home, a new studio album with 11 recordings that are a reflective upbeat journey through life, love, and time’s inescapable rhythms viewed from Willie’s inimitable perspective.

Guns N’ Roses is bringing their outrageously successful Not In This Lifetime Tour back to the U.S this fall – and for the first time in 2019. With fans hungry for more GNR, today the band revealed eight new dates across the United States, including two back-to-back nights at The Colosseum at Caesars Palace Nov. 1 and 2. Other than Salt Lake City, these will be their only West Coast dates in 2019, and their most intimate venue since the 2017 performance at The Apollo Theater. The shows are scheduled to begin at 8 p.m.

Guns N’ Roses fans rejoiced when Axl, Slash, and Duff reunited for the Not In This Lifetime Tour back in 2016. Since their unbelievable return, the rock icons have performed 150+ shows for over five million fans in stadiums, arenas, and as part of festivals worldwide. Last year the band made history by performing in Hawaii for the first time ever at Honolulu’s Aloha Stadium. They have dominated 14 stadiums and held five summer festival headlining slots around the world as part of the monumental run.

Following the group’s 1985 formation, Guns N’ Roses injected unbridled, unrivalled, and unstoppable attitude into the burgeoning Los Angeles rock scene. The spirit went on to captivate the entire world with the release of their 1987 debut Appetite for Destruction–the best-selling U.S. debut ever, moving 30 million copies globally. In 1991, the seven-time platinum Use Your Illusion I and Use Your Illusion II occupied the top two spots of the Billboard Top 200 upon release. Over the course of the past decade, Guns N’ Roses have performed sold out shows and headlined festivals worldwide following the critically acclaimed release of 2008’s RIAA platinum-certified Chinese Democracy. Six studio albums later, Guns N’ Roses are one of the most important and influential acts in music history and continue to set the benchmark for live performances connecting with millions of fans across the globe. Guns N’ Roses’ are Axl Rose (vocals, piano), Duff McKagan (bass), Slash (lead guitar), Dizzy Reed (keyboard), Richard Fortus (rhythm guitar), Frank Ferrer (drums), and Melissa Reese (keyboard).

After a sold out, two-day demolition derby event in May, the Plaza Hotel & Casino will host the Sin City Showdown Demolition Derby at its Core Arena, for three days, Nov. 14-16.

Produced by Stirrin Dirt Racing, the largest demolition derby promoter in the west, the Sin City Showdown will offer a third day of action, with shows at 3 p.m. on Thursday, Nov. 14 and Friday, Nov. 15 and an additional 11 a.m. matinee and 5 p.m. evening show on Saturday, Nov. 16.  The November event will feature thirty-two 4-man teams – that’s 128 old Detroit iron cars battling it out in an elimination bracket to be the last team standing. On Saturday, a locals’ only heat has been added, featuring drivers just from the Las Vegas area in a 1990’s and newer car class. A family friendly event, children three and under can attend for free. Tickets can be purchased online: single day tickets are $45 and discounted tickets at $30 per day are available with a hotel room reservation (prices do not include taxes and fees).

“The demolition derby at the Plaza in March was simply amazing,” Jonathan Jossel, Plaza Hotel & Casino CEO said, “The Core Arena was filled to capacity for this fun, family friendly  action-packed event. Given its popularity and success, we are excited to welcome a bigger, three-day demolition derby event to the Core Arena and downtown Las Vegas this November.”

Stirrin’ Dirt Racing is currently working on a television series set to air this fall featuring the owners: Johnny Gullo #17, Jim “Gumby” Simko #000, Dalton Gullo #16 and Jeri Gullo #17 plus other drivers from the western U.S. The show will also highlight the Sin City Showdown.

“Drivers from all over the country – east to west, north to south – and even as far as Canada are coming to Las Vegas to participate in the Sin City Showdown,” said Gullo. “We are excited at the chance to become the largest demolition derby in the United States.” More information on demolition derby tickets, hotel reservations and related events can be found online at https://www.plazahotelcasino.com/entertainment/demolition-derby/.

The Shade Tree, a 24-hour accessible shelter designed to specifically meet the needs of women and children in crisis, celebrates its 30th anniversary this year with its Mask Off Gala, including a special honor for Multi-Platinum singer-songwriter, Christina Aguilera, who has been a recent supporter of the organization. The gala will be held at Mansion 54 from 7 to 10 p.m. on Thursday, Oct. 3, and tickets are on sale now. General admission tickets are $200 and include open bar, entertainment, silent auction and “A Taste of DTLV,” featuring a variety of signature bites from downtown Las Vegas’ most popular eateries.   In addition, community members, companies and organizations are invited to support The Shade Tree through Gala sponsorship’s, which range from $2,500 to $25,000. For sponsorship packages of $10,000 and more, sponsors will have access to a VIP cocktail  reception from 5:30 p.m. to 7 p.m. which includes signature cocktails created by The Golden Tiki, passed appetizers, VIP gift bags and a meet-and-greet with Executive  Director of The Shade Tree, Linda Perez.

To purchase tickets and for more information on sponsorship packages, visit https://theshadetree.org/events/maskoffgala/, send a personal check in the mail to The Shade Tree or contact Jordan Berkowitz, development coordinator at (702) 385-0072 ext. 110 or [email protected]

Galleria at Sunset will host its third Sunset Shop & Wine on Saturday, August 24 from 6 to 9 p.m. Complete with more than 15 wine tasting stations located inside popular stores, the event also offers up, food, entertainment and exclusive savings and discounts.  Admission is $30 per person and all event proceeds will be donated to Miracle Flights, which provides free flights to sick children in need of life-changing medical care not found in their local communities. Tickets and information: www.galleriaatsunset.com/events/. 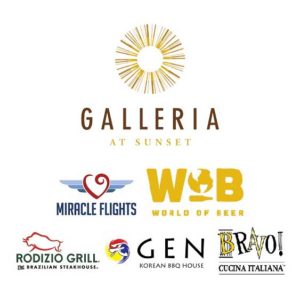 In addition to performances by Cameron Dettman’s Trio, tasty bites from featured Galleria at Sunset restaurants – Rodizio Grill, World of Beer, BRAVO! Cucina Italiana, and GEN Korean BBQ House – will be available. Samplings of the restaurants’ signature cocktails will also be served. Food, cocktails and live entertainment for Sunset Shop & Wine will be located near event check-in, on the lower level of Dillard’s. The $30 per person ticket includes a keepsake wine glass, map of participating stores and Galleria at Sunset coupon book with exclusive discounts. Adults 21 and older are welcome to attend.  To purchase tickets to Sunset Shop & Wine and for a full calendar of Galleria at Sunset events and hours, visit www.galleriaatsunset.com.

The legendary Harlem Globetrotters will bring their incredible ball-handling wizardry to Orleans Arena on Sunday, Aug. 25.  Best known for their celebrated basketball artistry, the Harlem Globetrotters have been thrilling fans with their rim-rattling dunks, trick shots, comedy and unequaled fan interaction for nearly a century. Throughout their history, the team has displayed its talents in more than 120 countries and territories worldwide, entertaining hundreds of millions of fans, including popes, kings, queens and presidents.

The Globetrotters’ star-studded roster includes Big Easy Lofton, Ant Atkinson, Hi-Lite Bruton, Thunder Law, Bull Bullard, and Cheese Chisholm, as well as female stars TNT Lister, Swish Sutton and more. After the game, Globetrotter stars will sign autographs and take photos with fans. The roster varies by city and is subject to change.  Showtime is 2 p.m. Tickets start at $20 plus fees and can be purchased by calling Ticketmaster at 800-745-3000; online at www.orleansarena.com or www.ticketmaster.com; or in-person at gift shops inside The Orleans, Suncoast, Gold Coast and Sam’s Town.