The 41st annual Mrs. America Pageant will once again return to its original home at the Westgate Las Vegas Resort & Casino this summer. Hosted by Barbara Chase, daughter of the late Florence Henderson, and actor Christopher Knight, the 2017 Mrs. America Pageant will be held Saturday, August 26, 2017 inside the renowned International Westgate Theater at Westgate Las Vegas Resort & Casino.

More than 52 women, including a contestant that will be more than eight months pregnant at the time of the competition, will compete in the 2017 Mrs. America Pageant for the chance to represent the United States in the internationally-televised Mrs. World Pageant, which will be held in South Africa in December 2017. A winner will be crowned during the final competition on Saturday, August 26 from 4 p.m. to 6 p.m.

The Mrs. America Pageant, rich in history, was first held in 1938 and continued until 1968. The pageant was revived after a nine-year hiatus in 1977 at the-then Las Vegas Hilton by David Marmel who, after a career in professional athletics and television production, helped transform the pageant into the multifaceted event is it today. The event was the first, and remains the foremost, competition for the married woman of the United States. Entering its fifth decade, Mrs. America has epitomized excellence, professionalism, and the celebration of family values.

Tickets are available for purchase by phone at 310-829-9902 and in-person the day of the show. The final competition day of the 2017 Mrs. America Pageant will once again be streamed for free at MrsAmerica.com. For additional details, please visit www.mrsamerica.com.

Las Vegas powerhouse vocalist Michelle Rohl will be bringing her long-awaited solo show, “Michelle Rohl Rox!” to The Smith Center on Saturday, August 26, 2017 at 8:00p.m. with the performance held in the popular Jazz Cabaret room.

Michelle has enjoyed a storied career, performing on albums with The Immigrants, Quiet Riot, Bonnie Tyler, and David Hasselhoff, to name a few.   She’s starred in countless Las Vegas productions including most recently Legends in Concert (with her tribute to Janis Joplin), Playboy’s Girls of Rock & Roll, American Superstars, and the Clint Holmes Show.

A 2011 inductee into the Las Vegas Rock and Roll Hall of Fame (along with the local rock band Sailon), the long-time Las Vegas favorite singer/songwriter and celebrity tribute artist will be performing her unique vocal renditions of Janis Joplin, The Beatles, Led Zeppelin, Bonnie Raitt and more – all under the musical direction of Emmy Award Nominee and Cabaret Jazz favorite Lon Bronson.   Special guests to include Lark Williams, Phil Wigfall, Nina DiGregorio Licata, and very special guests, original Sailon members Andy Matteucci and Braxton Pacatte. Tickets available through the box office at (702) 749-2000 or http://www.thesmithcenter.com/event/michelle-rohl-rox/

The late Terry Chandler’s dream of having a “giving car” in the NHRA Funny Car category will continue through 2020 after her husband, Doug Chandler, agreed to continue her mission and fund two Funny Cars with Don Schumacher Racing. The Dodge Charger R/T Funny Cars will continue to be driven by Tommy Johnson Jr. and Jack Beckman in the NHRA Mello Yello Drag Racing Series and will continue to benefit worthwhile non-profit organizations. Since Terry began funding the teams in 2014, they have donated branding space to the Make-A-Wish and Infinite Hero foundations.

She started a tradition in 2013 using Johnson’s team to promote Riley Hospital for Children’s Riley Kids program during the U.S. Nationals over Labor Day Weekend near Indianapolis, and that will continue at this year’s event. Terry was diagnosed with advanced brain cancer early this year and lost her valiant fight against the disease on July 4. She was 65.

“Terry loved her teams and I saw how much she looked forward to going to the races and help the children of Make-A-Wish and our soldier heroes who gave more than anyone could have asked and were helped by Infinite Hero when they came home,” said Doug, who was married to Terry for 49 years. “Terry lives on in so many people’s hearts and mine. I don’t want to see her dream end.”

Terry, who was presented with the NHRA Blaine Johnson Award in 2015 for her dedication to helping others, was a mainstay at the starting line when her Funny Cars raced, and was there for Pro Stock competition to support her nephew Shane Gray and his son, Tanner Gray.

Terry, and now Doug, will use the “giving racecars” as platforms to continue promoting awareness for great causes.

“Terry is just an incredible lady, and we’ll never know how many lives she impacted and how many will have continued to be helped with Doug continuing what she started,” Don Schumacher, owner of DSR and close friend of the Chandlers, said.  “We miss her every day, but we’ll never forget her smile and her big heart. Doug could have walked away from NHRA drag racing and it wouldn’t have done anything to lessen Terry’s legacy. His decision to continue what she started for the next several years shows his love and admiration for what she accomplished.” Don then added, “Everyone at DSR couldn’t be prouder of how Terry and Doug will continue to be part of our sport and help countless of people over at the least the next three years.”

Join Earl Turner and his very special guest, Clint Holmes, in the showroom at the South Point Hotel & Casino, as he presents “The Journey Continues,” where he chronicles his career from singing in coffeehouses to headlining in some of the country’s greatest showrooms, Friday and Saturday, August 18 & 19 at 7:30pm

From his small home town of Fayette, Missouri to the bright lights of the Entertainment Capital of the World, Earl shares his own very personal story.  How a chance interaction with a stranger led him to his very first real audition; How he literally begged a manager to join a band by telling him he could play “almost every instrument on that stage.” Then came an offer to sing and play guitar in an “all white county/western band!” You will laugh and learn how all those different roads eventually lead Turner to Las Vegas!  “The Journey Continued” will add some of your favorite songs from Earl’s time on the Vegas stages in the lounges and the showrooms, as both opening act and headliner, to his very own Earl Turner Theater at Harrah’s New Orleans.

Earl Turner’s NEW CD “Whatever Happens” will also be released on August 18th at the showroom, with a very special price for an autographed copy on sale, following the show. 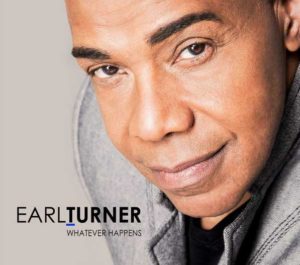 If you can’t wait until then, make sure to watch the “Whatever Happens” music video! And, as if all the above is not enough, you can also listen to him as he prepares to present “WHAT YOU’VE BEEN MISSING,” his new video/podcast show which will be coming very soon.  As he tells it, “we all have a back story…. the story of our lives, with trials and tribulations, failures, and successes. What we all learn along the way is that it’s not what life throws at you, it’s how you deal with it.  It’s not about the “knock down,” it’s about the get up! And most importantly, what have you learned and when did you learn it?   I believe our back story is worth sharing… It’s ‘What You’ve Been Missing’.”

Be prepared to remember all the places you’ve seen him and the songs he sang that made you smile and touched your heart… With well over twenty years and 1,000’s of performances behind him, Earl is once again able to share this story with you!  Don’t miss this very special Limited Engagement, with his very special friend, the popular Clint Holmes.

Hot on the heels of sold out shows and his smash hit Netflix special, Las Vegas’ home grown superstar comedian Jo Koy makes his return to the Treasure Island Theatre September 1 at 9 p.m.  The comedian, who got his start producing his own shows at the historic Huntridge Theater, put his skills to good use producing his third comedy special “Jo Koy: Live from Seattle,” which debuted on Netflix earlier this year. The highly-rated special has garnered Koy new fans from around the world, but Vegas audiences have been selling out the Treasure Island showroom for years, clamoring for impressions and stories, uproariously focused around his family, especially his mother and son. New and longtime fans should expect new material when Koy returns September 1.

Koy rose to prominence with performances on “The Tonight Show” and “Comic View” and began touring relentlessly, on USO and Def Jam Comedy tours, on Carlos Mencia’s “Punisher” tour and with Chelsea Handler and Jon Lovitz, and finally on his own. Koy has had two specials on Comedy Central, “Don’t Make Him Angry” in 2009, and “Lights Out” in 2012. He was also a regular panelist on “Chelsea Lately,” appearing on more than 100 episodes from 2009 through the finale, and appears on Chelsea Handler’s Netflix project “Chelsea Does.” He also voices several caricatures on “The Adam Carolla Show” podcast including a Japanese competitive food eater, a P.F. Chang’s host and Bung Lu Soo, an aspiring singer. Koy also has his own Carolla Digital podcast, “The Koy Pond.”

Koy’s stage name comes from the Filipino term “Jokoy” which means joker and was his childhood nickname.  Tickets are available starting at $54.95, plus taxes and service charges, and can be purchased by calling 866-712-9308 or 702-894-7722, or visiting www.treasureisland.com.

Well, gang, another good week to look forward to.