“Man of La Mancha” transports you back to the volatile days of the Spanish Inquisition, when playwright Miguel de Cervantes and his trusty servant have been thrown into prison after being accused of crimes against the church. To prevent all his belongings (including a precious manuscript) from being destroyed by the other prisoners in their mock trial, Cervantes must think fast.  With his back against the wall, the desperate playwright uses his only weapon; he distracts the prisoners by telling them the story of Don Quixote. 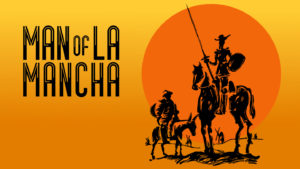 This is a remarkable show and one of the great theatre successes of our time. It is the story of a dying old man whose impossible dream takes over his mind. Songs like “It’s All the Same,” “Dulcinea,” “I’m Only Thinking of Him,” “The Impossible Dream,” “I Really Like Him,” and “Little Bird” remain in your thoughts and in your soul well after you see the show. His dream is Everyman’s dream. His tilting at windmills is Everyman’s great adventure. Somehow, the footlights disappear, time is telescoped and the “Man of La Mancha” speaks for humankind.

The musical was written in 1964 by Dale Wasserman, with lyrics by Joe Darion and music by Mitch Leigh. It was first adapted from Wasserman’s non-musical 1959 teleplay “I, Don Quixote,” which was originally inspired by Miguel de Cervantes and his 17th-century masterpiece “Don Quixote.” The original 1965 Broadway production ran for 2,328 performances on the thrust stage in New York City and won five Tony Awards, including Best Musical, Best Performance by a Leading Actor in a Musical and Best Choreography. The musical has been revived four times on Broadway, and has played in many other countries around the world.

Directing Super Summer Theatre’s production of “Man of La Mancha” is Joe Hynes, marking the second show he has directed this season, having also directed “The Wedding Singer” in June. He also previously directed the Super Summer Theatre productions of “The Producers” in 2013 and “The Mystery of Edwin Drood” in 2016, with plans to direct another production next summer. He has also acted in several Super Summer Theatre productions since 2008, including “1776” (2008), “The Drowsy Chaperone” (2011), “Crazy for You” (2012), “Chitty Chitty Bang Bang” (2015) and “Lend Me a Tenor” (2015). Hynes has worked professionally in theater for more than 30 years in cities across the country including New York and Miami.

The performances begin Wednesday, Aug. 9 and run through Saturday, Aug. 26. Tickets are on sale now. Tickets for all performances are $15 in advance and $20 day of show. Children ages five and under are free (no ticket needed). Tickets can be purchased online at www.supersummertheatre.org or at Prestige Travel at 7550 W Lake Mead Suite 7, Las Vegas, NV 89128 (NE corner) or Super Summer Studios 4340 S. Valley View Suite 208, Las Vegas, NV 89103 (Valley View and Flamingo).

Theatre parking is available starting at 5 p.m. and the meadow opens at 6 p.m. All performances of “In the Heights” begin at 8:05 p.m. Guests are invited to bring a blanket or chair, as well as a picnic dinner, or may purchase dinner from one of several food vendors onsite. Chairs are available for rent for $1.

“Man of La Mancha” is the third musical to light up Spring Mountain Ranch during the 2017 summer season, marking 42 years of bringing high-quality, affordable theatrical entertainment to the meadow at Spring Mountain Ranch State Park. The 2017 season kicked off with a concert-style fundraising weekend presentation of “Oklahoma!” as well as “The Wedding Singer” in June and “In the Heights” in July. Other upcoming musical theatre productions include September’s musical production of “Young Frankenstein.”

The Westgate Las Vegas Resort and Casino presents the 40th Tribute to The King, a month-long celebration with casino promotions, food specials and more to celebrate the good old days when Elvis roamed the great stage of the showroom, and Col. Parker was outside roaming the gaming tables. Held throughout the month of August, the celebration includes, “Eat Like a King,” at Sid’s Café, beginning on Friday, August 11, 2017 through Friday, August 18, 2017. Sid’s will feature Elvis’ delicious Grilled Peanut Butter, Bacon and Banana Sandwich, served with thick-cut fries or house-made potato chips for $14, a Southern Fried Chicken with Mashed Potatoes and Gravy, Corn on the Cob and homemade Buttermilk Biscuits for $20, and BBQ Beef Brisket with Baked Beans, thick-cut Fries and Cole Slaw for $20.  Sid’s Café offers a creative approach to home style cooking, while boasting attentive service and large plates of freshly prepared food. Menu options include appetizers, salads, diverse entrées, delicious burgers, and desserts. Dress code is casual and Sid’s Café is a non-smoking restaurant. 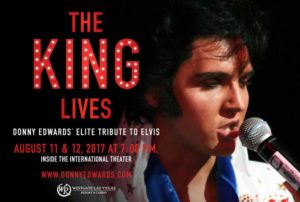 To add to the weekend, you can enjoy two special performances of “The King Lives! Donny Edwards Elite Tribute to Elvis,” on Friday, August 11 and Saturday, August 12. Starring Donny Edwards, the only Elvis Tribute Artist to perform at the hallowed grounds of Graceland, and an incredible 10-piece band, “The King Lives! Donny Edwards Elite Tribute to Elvis,” will take fans from the nostalgic songs of the 1950s and 1960s to “The King’s” transition into the famous jumpsuit of the 1970s. Held inside the famed International Showroom, tickets for this exceptional tribute show start at $22 plus tax and applicable fees. Both shows begin at 7 p.m. and are open to all ages. I’ve watched Donny perform, and gang, there is none better.

Golfers of all levels can now identify their most common putting mistakes by training their aim with INPUTT, the new portable putting device that reveals how to easily correct those mistakes and find the proper putting path. Officially launching at the 2017 PGA Fashion and Demo Experience in Las Vegas from Aug. 14-16, INPUTT aims to improve golfers’ putting by removing as many variables as possible, allowing them to focus entirely on their stance and stroke.  INPUTT has a patent-pending curvature that keeps the putter head square while maintaining the position of the arms, shoulders, and torso through the entire arc of a proper stroke, allowing golfers to develop a consistent movement pattern and easily see what they’re doing wrong with their stance, swing, and clubface, pinpointing any issues to put the ball in the same place every time.

“Players can see their putting issues in real-time, and correct them on the spot,” inventor Barry Herbst said. “As they practice with it, they can continually identify and correct mistakes, and teach themselves an easily-repeatable perfect putting stroke.”

The white guidelines on the top of INPUTT help to ensure that the clubface stays square from backstroke to through-stroke, and every point in between, and the small heel reminds players not to take their backstroke too far. 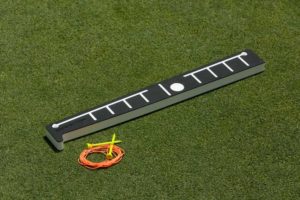 “This is the answer,” Ted Sheftic, PGA Professional and Golf Magazine Top 100 teacher, said. “From beginners to expert players, INPUTT can improve your putting. My students who have used it have had tremendous success. I’ve worked with junior players that have gone from 37–38 putts in a round to 29–30 putts. That adds up to a lot of low scores.”

After setting up the INPUTT on a practice green, users are encouraged to make five–10 putts in a row before increasing the putt length. Once putts are consistently made using INPUTT, the lessons should be applied by putting on the same surface without the training device. Golfers should see dramatic improvement in as little as 10–15 minutes a day, three to five times per week. Handcrafted in the USA, and designed for left-handed or right-handed golfers, INPUTT is available for purchase for $89.95 inclusive beginning Aug. 14. For more information, including tips on how to use INPUTT, testimonials, or to order the training device, please visit www.INPUTTgolf.com and subscribe to the YouTube channel. For the latest INPUTT news, follow on Facebook, Twitter and Instagram.

The city of Las Vegas Rainbow Company Youth Theatre will hold auditions on two Saturdays in August for its Student Ensemble and its first fall show, “The Reluctant Dragon.” Youth ages 10-17 are eligible to audition for the Rainbow Company Student Ensemble Saturday, Aug. 12, at 1 p.m. at the Charleston Heights Arts Center located at 800 S. Brush St. There is no cost to audition but there is a $50 annual fee if accepted into the company. No preparation is necessary; the audition is improvisation. All participants will be at the audition until about 3 p.m., and near that time, some students will be released. Students must be at least 10 years old on the day of the audition. Ensemble members learn all aspects of technical theatre as well as performance skills. Not for the faint of heart when it comes to a demanding time commitment, the Ensemble member is expected to participate in the four annual Rainbow Company productions (be it backstage or onstage), to attend weekly meetings and take classes. This program is for the serious theatre student. Call 702-229-ARTS (2787) for more information. Residents ages 10 to adult are invited to audition on Saturday, Aug. 19, at 1 p.m. at the Charleston Heights Arts Center. In this play, the village of Guildermere blames the dragon who lives upon the downs for anything that goes sour in their lives. But this dragon is a peace-loving, poetry-spouting fellow who would much prefer a cup of tea to a battle. Rehearsals will begin Aug. 21 and there will be seven performances Sept. 22-Oct. 1 at the Charleston Heights Arts Center. Call 702-229-ARTS (2787) for more information.

Well, gang, that’s all the news for this week.