Well, gang the “Boys of Thunder” will be arriving this week, forsaking the annual “Parade of NASCAR Haulers on the Las Vegas Strip,” due to the Daytona 500 being moved to Monday afternoon, thereby making the cross-country journey running a wee bit to-tight for the parade. And since you already know where I’ll be I thought I would letcha know something about what’s going on at the speedway beginning Thursday and running through Sunday. The weather God is supposed to be good to us also!

The entries for all three NASCAR races at Las Vegas Motor Speedway have been released, and it promises to be an entertaining 72 hours of action for fans on hand and those watching around the world. Headlining the racing action is the NASCAR Cup Series Pennzoil 400 presented by Jiffy Lube on Feb. 23.

Two Las Vegas natives – Kurt and Kyle Busch – will look to use home field advantage and bring home the trophy. Kyle – who will pull triple duty over the weekend, racing in the Star Nursery 100 Super Late Model Open Comp on Thursday, Feb. 20, and hoping to repeat as champion of the Strat 200 NASCAR Gander RV & Outdoors Truck Series race on Friday, Feb. 21 – won his lone Pennzoil 400 title in 2009. Kurt is hoping to cross the elusive win off his list.

Joe Gibbs Racing, fresh off its second straight Daytona 500 win with Denny Hamlin, will look to break its drought in Vegas. JGR last won the Pennzoil 400 in 2013, and will hope Hamlin, along with Kyle Busch, Martin Truex Jr. and Erik Jones can take the checkered flag.

In the Xfinity Series Boyd Gaming 300 on Feb. 22, two more native Las Vegans will hope for a victory. Noah Gragson – who won the NASCAR Racing Experience 300 in Daytona last Saturday – is riding the momentum of his first Xfinity Series win as he heads home to Vegas. Riley Herbst will look to follow Gragson’s lead and pick up his first Xfinity victory when he returns to his birthplace. 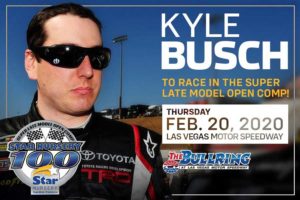 The 1980 “Miracle on Ice” U.S. Olympic Hockey Team will be the grand marshals for the Pennzoil 400 on Sunday. The group will include most members from that historic team, which shocked the Soviet Union in the semifinals before defeating Finland to win the gold medal in Lake Placid, N.Y.

Carnell Johnson will perform the national anthem before the start of the 267-lap race. The 38-year-old Las Vegan, who is a trained bass-baritone singer, has become a Vegas celebrity for his work as a mainstay with the Vegas Golden Knights, earning the moniker “Golden Pipes.”

Musical guest The Jets will perform as part of the speedway’s race-day festivities, performing the pre-race concert that leads up to the official Driver Introductions that are set for 11:50 a.m. Pacific Time. The Jets enjoyed worldwide success during the late 1980s and early 1990s, performing three world tours, and producing eight top 10 hits. The group now has its own show in Vegas, “The Jets 80s & 90s Experience.” Performances take place at 7 p.m. Tuesday through Saturday at the V Theater at the Miracle Mile Shops at the Planet Hollywood Resort.

Kevin Harvick is off to his best start since 2016 as he finished a respectable fifth in the season-opening Daytona 500. It’s his best finish in the Great American Race at Daytona (Fla.) International Speedway since he came home fourth in 2016.

Now, the rest of the season is off and running, and it starts with the three-race West Coast Swing at Las Vegas Motor Speedway, Auto Club Speedway in Fontana, California, and Phoenix International Raceway.  First up for Harvick and the No. 4 Busch Light Ford Mustang is the Las Vegas 400. It’s a place where Harvick has had a lot of success, as he has scored wins in 2015 and spring 2018 and a Busch pole last spring at the 1.5-mile oval.  In 2015, he started 18th, led five times for a total of 142 laps and beat runner-up Martin Truex Jr. by 1.640 seconds. In the spring 2018 race, he started second and dominated by leading 214 of 267 laps en route to beating runner-up Kyle Busch by 2.906 seconds.

There’s nothing like a little West Coast Swing to kick start the fortunes of the newest full-time competitors in the NASCAR Cup Series garage – the No. 96 Toyota Certified Used Vehicles Camry of Gaunt Brothers Racing (GBR) and its driver, Mexico native Daniel Suárez.

The second, third and fourth stops on the 2020 Cup Series tour are on tap the next three weekends and take Suárez and his new teammates to three distinctly different racetracks, but all situated in desert-like surroundings similar to his hometown of Monterrey, the capital of the Northern Mexico state of Nuevo León.

It will be the first, full West Coast Swing for the GBR team, which joined the NASCAR Cup Series ranks as a part-time competitor in 2017 and is taking on the full slate of 36 points-paying races for the first time in 2020. The No. 96 Toyota team has twice graced the Las Vegas oval, starting 35th and finishing 25th with driver Jeffrey Earnhardt in the September 2018 race, and starting 32nd and finishing 31st with driver Parker Kligerman in last year’s March race. The team will be competing at Fontana for the first time this year, while its only previous Phoenix appearance was in March 2018, when D.J. Kennington qualified 34th and finished 31st.

Suárez, meanwhile, is a veteran of West Coast Swings, having made the annual trek to the Nevada-California-Arizona desert for the back-to-back-to-back races since his first full NASCAR Xfinity Series season in 2015. He had a particularly solid run during his 2016 Xfinity Series championship season, when he posted finishes of second, third and fourth at Las Vegas, Phoenix and Fontana, respectively.

This weekend, Suárez is eyeing his sixth career Cup Series appearance at Las Vegas, where he has an average start of 14.4, an average finish of 18.2, and 42 laps led. Last September, he qualified on the front row and led 29 of the first 30 laps of the 267-lap race, finishing fourth in the opening stage and maintaining his position in the top-15 through the second stage. But then, on a lap-185 restart, he was caught in a multicar pileup that damaged his racecar.

Aric Almirola, driver of the No. 10 Smithfield Ford Mustang for Stewart-Haas Racing (SHR), will make his first start at a 1.5-mile track with his new crew chief Mike Bugarewicz and their new-look team. Since joining SHR in 2018, Almirola has posted top-10 finishes in three of his four Las Vegas starts with a best finish of sixth in the fall 2018 race. He finished 13th last fall. Bugarewicz has six previous starts at Las Vegas, the last five with SHR’s No. 14 team and driver Clint Bowyer, with a best finish of 10th in the spring 2017 race and a pole qualifying effort last fall.

“I’m looking forward to heading to Vegas this weekend,” he said. “It will be a great chance to grow together with ‘Buga’ and the new team to dial in communication and get on the same page. We already learned a lot during Daytona Speedweeks and I’m really looking forward to seeing where we are competitively.”

Last weekend, Almirola and his new team debuted their talents at the 62nd running of the Daytona 500. The Tampa native ran strong in the non-points Busch Clash Feb. 8, leading during the closing laps before being taken out by a competitor and ultimately finishing 10th. Almirola started the Daytona 500 fifth after finishing second in his Bluegreen Vacations Duel. He raced in and around the front and led six laps until being involved in “The Big One” on lap 183. The Smithfield Ford team was able to repair damage enough to keep Almirola on track to finish 22nd.

Well, gang, you already know where I’ll be this weekend—The Media Center at the speedway.