Just in time for thoughtful holiday giving, a book about the Las Vegas Community Healing Garden, “Healing Las Vegas,” is on sale now with proceeds benefiting the Garden.  A compilation of photos, memories, poems, inscriptions and tributes to both survivors and victims of the 1 October mass shooting in Las Vegas, the book was inspired by the Garden, literally conceived on October 2, 2017, the day after the shooting, as a community initiative to help Las Vegas heal.

According to Mauricia Baca, executive director of Get Outdoors Nevada, the nonprofit that joined with the City of Las Vegas to help oversee and care for the Garden, the book, like the Garden, is a community effort.

“This book is the result of a collaboration between the City of Las Vegas, the University of Nevada Las Vegas, and University of Nevada at Reno Press, and Get Outdoors Nevada,” said Baca.  “The book is filled with photos chronicling the first year of the Garden and is punctuated with quotes and thoughts from the families of victims collected by the UNLV oral history department, survivors and first responders and includes tributes from both Nevada Governor Steve Sisolak and city of Las Vegas Mayor Carolyn Goodman.  Most importantly, it is an important account of a very dark time in Las Vegas history, but with a hopeful outlook of how the community came together to honor those affected while healing themselves.”

The Community Healing Fund is a part of the Mayor’s Fund for Las Vegas LIFE, a public-private partnership that provides corporate and individual donors with an avenue to support key initiatives that enhance the quality of life for Las Vegans.

The Mayor’s Fund for Las Vegas LIFE, established in 2018, targets specific community needs in the areas of Livability (affordable housing, homelessness, access to arts and culture and recreation); Innovation (solutions to social, technological and environmental issues with special focus on increasing access to the Internet for all residents); Future (youth employment, workforce readiness and training); and Education (programs for learners at all levels with special focus on early childhood education through the city’s Strong Start Academies including Strong Start GO!).

The holiday-themed attraction at Mystic Falls Park® is a time-honored tradition that goes back to 1994. The seasonal décor features whimsical snowflakes leading guests through the property to Mystic Falls Park®. Garland streams, wreath-adorned lampposts and snow-covered trees fill the atrium, with decorations offering guests a glimpse inside Santa’s workshop.

A nine-minute laser light show is the centerpiece of the display, featuring a variety of classic holiday songs. Performances run every hour, between 5:00 p.m. and 10:00 p.m. Adding to the wintery experience, Mystic Falls Park® will make it snow in the Las Vegas desert every night through the new year. Santa Claus will also join in on the festivities to welcome families.

The GRAMMY Award Nominated Liverpool Legends, “The Complete Beatles Experience,” will take over M Resort Spa Casino for a much-anticipated one-night performance inside the M Pavilion on Jan. 11, 2020. Performing songs from the entire career of The Beatles and their solo years, Liverpool Legends pay close attention to every musical and visual detail, with costume changes, vintage instruments and special effects. Concertgoers will feel like they are witnessing the real thing when these four lads come together on stage to bring down the house. Tickets, starting at $15, are on sale now and can be purchased by visiting ticketmaster.com.

“Each member of the group is so close to the originals that I often feel like I’m transported back in time with the lads,” said Louise Harrison. “These are exactly the kind of fun-loving quality musicians that my brother George would have loved to hang out with.”

Doors open at 7:00 p.m. on Jan. 11 and the show will begin at 8:00 p.m. Tickets start at $15, plus applicable L.E.T. and facilities fees. For more information on M Resort Spa Casino’s events and promotions and to purchase tickets, please visit ticketmaster.com.

Disney On Ice presents Mickey’s Search Party is bringing guests closer to the magic than ever before through dynamic and immersive moments that take place on the ice, in the air and in the seats. This participatory adventure delivering compelling storytelling through multi-leveled production numbers visits Las Vegas from Thursday, January 9 to Sunday, January 12, 2020 for seven performances at Thomas & Mack Center.  Tickets are on sale now.

Embark on a quest with Mickey Mouse and pals as they follow Captain Hook’s treasure map for clues to find Tinker Bell after he attempts to capture her magic. Journey across the Marigold Bridge with Miguel from Disney and Pixar’s Coco into the magnificent and mystical Land of the Dead and discover a vibrantly colorful performance with skeletons atop sway poles dancing over the audience in a beautiful cultural celebration of family. Travel to the wintry world of Arendelle and sing along with Elsa as video projection creates a kaleidoscope of crystals to help build her ice palace. Witness Belle lift into the sky as the enchanted chandelier comes to life high over the ice for onlookers seated above and below. Demonstrate the power of teamwork when Buzz Lightyear, Woody and Jessie recruit the Green Army Men and the audience for a daring rescue in Andy’s room. Laugh hysterically as the hilarious pirates flip, tumble, and twist on tumble tracks, stilts and more in an effort to showcase their talents for Captain Hook. Sail away with Moana on her daring voyage across the ocean and bravely encounter the fiery wrath of Te Ka. And make memories with your whole family during Aladdin and The Little Mermaid as the search party becomes an all-out celebration. 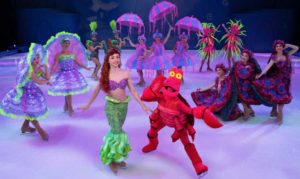 Tickets for Disney On Ice presents Mickey’s Search Party start at $15 plus tax and fees. All seats are reserved, and tickets are available online at UNLVtickets.com, charge by phone at 702-739-FANS, in-person at the Thomas & Mack Center box office or the UNLVtickets outlets at La Bonita Supermarkets. For group rates and information, reach out to Feld Direct at 866-248-8740.

Due to popular demand, one of the most successful and critically acclaimed rock bands of all time – Chicago – announced that they will be returning to The Venetian Theatre inside The Venetian® Resort Las Vegas in 2020 for the third year in a row for an eight-show limited engagement. The shows will be held on February 28 and 29 and March 4, 6, 7, 11, 13 and 14 at 8 p.m.

Tickets start at $49.95, plus applicable fees, and are on sale to the general public now. A limited number of VIP packages will also be available. Tickets will be available for purchase at Ticketmaster.com, Venetian.com, any box office at The Venetian Resort or by calling 702.414.9000 or 866.641.7469.

Hailed as one of the “most important bands in music since the dawn of the rock and roll era” by former President Bill Clinton, the legendary rock and roll band with horns, Chicago, came in at #4, the highest charting American band in the chart’s history, in Billboard Magazine’s Top Bands And Duos. And Chicago is the first American rock band to chart Top 40 albums in six consecutive decades. Chicago was inducted into the 2016 Rock and Roll Hall of Fame. This was their first nomination. They’ve been eligible since 1994. A long time coming!  Chicago’s first album, Chicago Transit Authority, was inducted into the GRAMMY Hall Of Fame in 2014, and the band performed on the GRAMMY stage for the first time that year.

Robert Lamm and James Pankow have become inductees of the Songwriters Hall of Fame in 2017. These legendary songwriters wrote mega-hits such as, “25 or 6 to 4,” “Saturday In The Park,” “Feelin’ Stronger Every Day,” “Make Me Smile,” and many others. Chicago will celebrate the holidays this year with a new Christmas album, CHICAGO CHRISTMAS, that spotlights the legendary group’s trademark sound on eight original songs, two yuletide favorites and one timeless classic that embraces the spirit of hope.

CHICAGO CHRISTMAS was released on CD and through digital and streaming services. In addition, a black vinyl version of the album will be released to general retail, with limited-edition red and white vinyl versions exclusively available at Rhino.com. All vinyl versions will be available on November 22.

Well, gang, the Holiday’s are among us now. Thanksgiving is just around the corner and then it’s time for the “jingle bells,” and dear ol’ St. Nick.