The excitement and energy of NHRA racing on the track will be as adrenaline-pumping as ever, but in 2016, the NHRA Mello Yello Drag Racing Series is shifting gears and venturing boldly into a brand new era. It’s one of the most eagerly anticipated seasons for the NHRA community in many years. New TV partner FOX Sports will aim its cameras at the exciting side-by-side racing on the drag strip and showcase the sport with live coverage of Sunday eliminations at 17 events – including the Las Vegas race – and provide more than 500 hours of NHRA programming on its family of networks. There are new rules for the Pro Stock category that will help the factory hot rods recapture the 200 mph magic that makes the class a fan-favorite. There’s even a bold new NHRA Mello Yello Drag Racing Series logo. 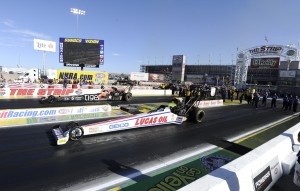 In addition, NHRA will ask its legion of fans and highly-skilled drivers what they love about the sport in the new “MY NHRA is…” marketing campaign. NHRA’s celebration of the 50th anniversary of Funny Car is sure to be a fan-favorite attraction as well, and as part of that celebration, there will be one legendary Funny Car driver honored during pre-race ceremonies.  While there will be a lot of newness floating around the Las Vegas track during the event, one thing fans can count on is the same high-intensity, drama-filled competition that they have become accustomed to. The DENSO Spark Plugs NHRA Nationals has provided high stakes entertainment in a city known around the world for its daily offerings of showbiz, amusements and fun. The action on the Vegas strip is matched only by the powerful sensation of two 10,000-horsepower machines thundering side-by-side down The Strip at LVMS at more than 300 mph.

In Top Fuel, Crampton powered to victory over Larry Dixon in the final round last year to earn his first victory of the season. The win kicked off a very successful 2015 campaign in which the 2014 Rookie of the Year tallied five total victories and a third place points finish. Crampton will look to defend his title in his Lucas Oil dragster and claim the eighth victory of his young career, but that will be no easy task. Every driver in the fierce Top Fuel class will be putting up a fight in the desert. Leah Pritchett, driver of the Quaker State/FireAde dragster for Bob Vandergriff Racing, got her first taste of victory Feb. 28 in Phoenix and she is hungry for more. Eight-time world champ Tony Schumacher, who has four career victories at the DENSO Spark Plugs NHRA Nationals and eight career victories at the facility, will be eager to race his way back to the winner’s circle. Others in the 10,000-horsepower, nitro-burning class hoping to seal a Las Vegas victory include points leader Doug Kalitta, Winternationals winner Steve Torrence, reigning world champ Antron Brown and Monster Energy dragster driver Brittany Force, just to name a few.

John Force defeated teammate Robert Hight in the Funny Car final last year at the DENSO Spark Plugs NHRA Nationals to earn his first victory of the year. Force, a 16-time world champion, will have his eyes set on earning his 144th career win as he pulls his PEAK Chevrolet Camaro SS onto The Strip at Las Vegas Motor Speedway. In Phoenix, Force raced to the final round but couldn’t seal the victory as he experienced problems at the top-end of the track. He is currently second in points, but will have to deal with the likes of Pomona winner Ron Capps, teammate Hight, defending world champion Del Worsham, Phoenix winner Tim Wilkerson, Alexis DeJoria, Jack Beckman and Tommy Johnson Jr.

In the all-new Pro Stock class, Enders will look to get back to her championship-winning ways after suffering two first round losses to open the season in Pomona and Phoenix. Last year in Las Vegas, Enders sprinted past Vincent Nobile in the final to earn her first victory of the season. She won seven more races en route to her second consecutive world championship. After a less-than-ideal start to the 2016 season, Enders will hope to find that same magic this April in Las Vegas. Standing in her way, though, will be her teammates Drew Skillman and Jeg Coughlin Jr., the Summit Racing duo of Greg Anderson and Jason Line, who combined to win the first two races, Phoenix No. 1 qualifier Bo Butner and the tough Texan, Chris McGaha, who was runner-up to Line in Phoenix. The sleek new Pro Stock cars feature fuel-injected engines, shorter wheelie bars, flat hoods and a 10,500 RPM rev-limiter.

As always, fans will have the opportunity to interact with their favorite drivers as they’re granted an exclusive pit pass to the most powerful and sensory-filled motorsports attraction on the planet. This unique opportunity in motorsports gives fans direct access to the teams, allowing them to see firsthand the highly-skilled mechanics service their hot rods between rounds, and get autographs from their favorite NHRA drivers. Fans also will want to visit NHRA’s popular Nitro Alley and Manufacturers Midway, where sponsors and race vendors create a carnival atmosphere, with interactive displays, simulated competitions, merchandise, food and fun for the entire family.

Mello Yello Drag Racing Series qualifying will feature two rounds at 1:30 and 4:30 p.m. on Friday, April 1, and the final two rounds of qualifying on Saturday, April 2, at 1 and 4 p.m. Final eliminations are scheduled for 11 a.m. on Sunday, April 3.

To purchase general-admission or reserved seats, call (800) 884-NHRA (6472) or visit www.NHRA.com/tickets. Kids 12 and under are free in general admission areas with a paid adult. For more information about the NHRA visit www.NHRA.com.

Award-winning singer-songwriter and headline entertainer Clint Holmes will take the stage at M Resort Spa Casino on Saturday, April 23. Performing inside the 2,300-seat M Pavilion and backed by the 10-piece band Santa Fe and the Fat City Horns, Holmes will deliver an unforgettable performance featuring contemporary hits and selections from the American songbook.

With more than 20 years of experience as a performer, Holmes is best known for his casual elegance on stage, silky vocal styling’s and warm comedic touch. His repertoire ranges from contemporary to classic, with elements of jazz, opera and everything in between. Holmes has served as Joan Rivers’ sidekick and announcer on “The Late Show,” the musical feature and event correspondent for “Entertainment Tonight,” and as the host of his own Emmy award-winning talk/variety show.

A favorite in the Las Vegas community, Holmes has been named “Best Kept Secret” by Las Vegas Life Magazine, “Best Singer” (two years in a row), “Best All-Around Las Vegas Performer” and “Favorite Male Las Vegan” by the Las Vegas Review-Journal. Additionally he was inducted into the Buffalo Musical Hall of Fame and into the Casino Legends Hall of Fame.

Award winning, Italian icon and actress Sophia Loren will grace the stage at The Venetian Theatre inside The Venetian® Las Vegas on Saturday, March 26. Loren will treat fans to an unforgettable night of firsthand, personal accounts including such topics as her life in Italy, film career and private memories. Guests will also have the opportunity to ask questions for the actress through a moderator and to be answered by Loren herself on stage.

Loren, born Sophia Scicolone in Rome, started her career when she entered a beauty pageant at the age of 14, which caught the eye of producer Carlo Ponti, who would sign her to a contract and later become her husband.  Her talents as an actress were not recognized until her performance as Cesira in Vittorio De Sica’s “Two Women.” Loren’s performance earned her an Academy Award for Best Actress in 1962 and made her the first artist to win an Oscar for a foreign-language performance. She holds the record for having earned six David di Donatello Awards for Best Actress, the most ever received. In addition to her Academy Award, Loren has won a Grammy Award, five special Golden Globes, a BAFTA Award, a Laurel Award and the Honorary Academy Award in 1991. In 1995, she received the Cecil B. DeMille Award for lifetime achievements.

Loren was part of the opening ceremony of The Venetian Las Vegas when the hotel and casino debuted in 1999, launching the first gondola with a bottle of champagne accompanied by Las Vegas Sands Corp. President and Chief Executive Officer, Sheldon G. Adelson.

“To say Sophia Loren is iconic, glamourous, talented and elegant is a great understatement,” said George Markantonis, president and chief operating officer of The Venetian, The Palazzo and The Sands Expo. “These adjectives do not begin to do justice to the radiating woman we all know and love.  We can’t wait to have Ms. Loren back with us to wow fans with her one-of-a-kind evening in The Venetian Theatre.”

Well gang, that’s about it for this week.