Well, gang, I was one of the Standing Room only crowd, to see and listen to a new voice in our little village of Las Vegas at the Italian American Club last Friday night. Yep, the man known as “The Singer,” Elijah Rock sang his butt off, and clearly defined why he was given that title. This youthful, classically trained baritone covered the gamut of music, from Pop,  to crooner, to Opera with all the stops between.

Rock opened the show with a wonderful rendition of “Our Love is Here to Stay,” quickly followed by “Fascinating Rhythm,” and “I Can’t Get Started.” Elijah’s voice was big and powerful, and he immediately established that he was on that stage for one purpose and one purpose only—to entertain his audience with his talent. Everyone at our table knew we were headed for a great night of music, especially with the live band, under the direction of  Uli Geissendoerfer on piano, and consisting of Bob Sachs on Bass, Jakubu Griffin on Drums, and Jake Langley on Guitar.

One thing more about this man from Cleveland, Ohio, he loves the “Great American Songbook.” And not to surprising, but clearly one of the many icons in his life who had a great influence on his choice of music, was my good friend of more than 25 years,  Robert Goulet.

“Oh, my God, I studied him religiously. His voice was without question one of the best in the business,” Elijah told me during an interview.

And, he did exactly that earning his way up the ladder by singing in various Broadway touring shows, with symphony orchestras, recording albums, appearing on television, and earning high praise wherever he appeared. Elijah Rock won the 2014 NAACP Theater Award for Best Male Equity performer in  Breath and Imagination: The Story of Roland Hayes.  Rock was also Nominated for a 2016 Ovation Award for Best Featured Male Performer as the legendary Harlem showman Cab Calloway in “I Only Have Eyes For You: The Life and Lyrics of Al Dubin”  And, he commands the stage just like Goulet once did. I know Robert was smiling as he listened from above.

Rock can also tap dance and he shows this rare skill (somewhat of a lost art form today) when he sings “You Make Me Feel so Young.” Elijah’s next selection was a song made somewhat famous by another close friend from my past, Matt Monroe, “Around the World.” Other songs presented during the first half of his show were “How Long Has This Been Going On,” “All I Need is the Girl,” wrapping it up with his original salute to the Gershwin brothers, George and Ira, with “Gershwin for My Soul.”

This is where “The Singer” introduces a friend in the audience, Donny Most (famous for his stint in a little television show from the mid ‘70s called ‘Happy Days,” where he played  Ralph Malph in 168 of its shows over the 11-year run on ABC). Elijah explains how they met at a benefit, and the two sing a duet of “Luck be a Lady.” Donny then performs a dynamic solo of “Lady is a Tramp,” giving his host a chance to take a break.

To show his range, and the variety of song choices he has, our man returns to the stage and opens the second half with “Susurros En La Noche’” connected with “Whispers in the Night.” Wow, double wow! Another display of his tap-dancing skill is presented along with a great song, “Boulevard of Broken Dreams.” “New York City Springtime” is beautifully presented and then comes the closer.

Wow, triple Wow!  No one is expecting it. But suddenly this man who has crooned, tapped danced, sang Broadway hits, and a few off the book songs, is hitting notes made famous by Luciano Pavarotti as he sings, “Nessun Dorma” with perfection. Need I say more? When you next hear his name, and that he’s appearing somewhere near you, make sure you go and see for yourself what I just told you. I guarantee you he will get to your heart.

Angela Teek, a world-class, vivacious stage personality, will present a very special performance this Saturday evening in the showroom at the Italian American Club, 2333 E. Sahara Ave, with her classic show titled, “I Gotta Do What I Do,” kicking off the first notes at 8:00 p.m. 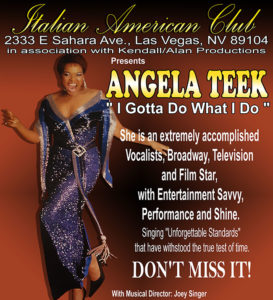 Teek, who uses her 3-octave range with incredible ease and exceptional flare, is from Pittsburgh, Pennsylvania, and began her career in Southern California studying with teacher/mentor, showbiz veteran Leonard Reed.  She was soon cast as Charmaine in “Aint Misbehavin” at the Las Vegas Sahara Hotel.  After headlining numerous cruises, Angela appeared on the original “Star Search” hosted by Ed McMahon where she was undefeated for 10 consecutive weeks winning the $100,000 grand prize as female vocalist champion.  Legendary producer David Merrick took notice and cast her in the leading role of Kay in George Gershwin’s musical, “Oh Kay” and she also played Sara in the Tony Award-winning musical “Ragtime”. She was Don Rickles’ opening act in an extended Las Vegas engagement at the Golden Nugget Hotel.

Angela has appeared on a number of television shows and continued performing on stage in leading roles such as “Joseph and the Amazing Technicolor Dreamcoat” and ”You Never Know.”  Her recordings include her debut album “Steppin’ Out”, the Broadway cast album of “Ragtime”, and the world-premiere cast album of “You Never Know”. Angela has performed leading roles in “Sophisticated Ladies”, the world premiere of “Ray Charles Live”, at the Pasadena playhouse directed by Sheldon Epps, and the world premiere of “The Princess And The Black-Eyed Pea.” She can also be heard as the voice of Viv the neighbor lady and Mama Bear on the PBS cartoon “Peg + Cat”

The world-famous Gold & Silver Pawn Shop, home of the “Pawn Stars”,  will join in the holiday shopping fever and host a Parking Lot Sale on Black Friday, Nov. 24 from 9 am – 3 pm. This sale will serve to kick off the shop’s official holiday shopping season. Taking place on the first floor of the neighboring Pawn Plaza, the sale will feature prices slashed as much as 80% and the items from the Pawn Shop inventory will include TVs, laptops, tablets, video games, cameras and camera equipment, tools, guitar amplifiers, art and much more.

One of the best kept shopping secrets in Las Vegas, shoppers will also be able to enjoy food and drink from the Pawn Plaza tenants and browse the retail outlets at the plaza.

Located at 713 S. Las Vegas Boulevard, the Gold & Silver Pawn Shop began as a gold and silver store in 1981 when the Harrison family first relocated from San Diego to Las Vegas.

In 1988, when the city finally had a population large enough to necessitate the need for another pawn store, Rick Harrison made sure he claimed that license. Often more of a museum-meets-art gallery and located on The Strip, the shop gained notoriety by reporters visiting Las Vegas. After four years of trying to sell someone in the entertainment business on the idea of three generations of a family owning a pawn shop on the Las Vegas Strip, Rick (son of Richard “The Old Man” and father of Corey) got someone’s attention and in 2009, “Pawn Stars” was born. An immediate success on television, it quickly increased the number of visitors coming into Gold & Silver Pawn to more than 4,000 on some days. In addition to souvenir t-shirts and “Pawn Stars” memorabilia, it is still a working pawn shop and is also a great place to view or buy rare art, guns, swords, toys and music collectibles, sports memorabilia, jewelry and so much more. For more information, visit gspawn.com.

For more than 20 years, Mystic Falls Park® has turned into a whimsical winter dream just before Thanksgiving to kick off the holiday season. From Nov. 21 through Jan. 1, visitors are invited to enjoy the indoor atrium filled with garland streams, wreath-adorned lampposts, snow-covered trees, and festive decorations offering guests a glimpse inside Santa’s workshop, from elves making toys to loading up Santa’s sleigh. The centerpiece of the attraction is a laser light show, featuring classic holiday songs and snow falling throughout the park. Santa will also join in the festivities with regular visits throughout the season.

Well, gang, be sure to have a safe and sober drive when you leave for home after the Turkey thing.