Led by its CEO, Jonathan Jossel, the Plaza Hotel & Casino will commemorate October as Breast Cancer Awareness month with special offers at Oscar’s and in its bingo room, the only one in downtown Las Vegas, all to benefit the American Cancer Society (ACS).

“I have known too many people affected by cancer, including friends, coworkers and even my own mother. That is why raising awareness for breast cancer research, patient support services, and prevention programs is so important to me,” said Jossel. “I am proud to be part of the American Cancer Society’s Real Men Wear Pink campaign and to create fun offers in Oscar’s and the bingo room in October that will raise additional awareness and funds to directly benefit the mission of ACS.”

Oscar’s, an award-wining vintage Vegas steakhouse inside the Plaza’s iconic glass dome, will donate $3 to ACS for every cosmopolitan cocktail purchased in the lounge or dining room during the month of October. Oscar’s is currently open Thursday through Sunday, 5 to 10 p.m. and offers happy hour from 5 to 7 p.m.

The Plaza’s bingo room, which has six daily bingo sessions, will sell commemorative pink capped daubers featuring various cancer awareness ribbons for $5 with 100 percent of the proceeds donated to ACS.

We have a lot of NASCAR news for you this week. First off the bat is the official release from NASCAR about the 2021 Cup Series schedule this past Wednesday, introducing three new tracks, expanding to six road courses, and placing a dirt-track race on the calendar for the first time in more than 50 years. Next year’s Cup Series remains at 36 point-paying races, starting as it did this year with the season-opening Daytona 500 (Feb. 14) and ending with the championship finale at Phoenix Raceway (Nov. 7). In between those bookends, there are new venues and schedule shuffles as part of the dramatic changes long hinted at by NASCAR officials. 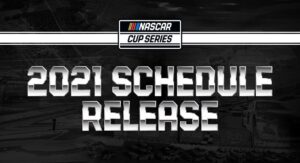 The Cup Series will also diversify its calendar with a temporary conversion of Bristol Motor Speedway to a dirt-track surface for its March 28 event. The last time NASCAR’s top division raced on dirt; Richard Petty won at the North Carolina State Fairgrounds’ dusty half-mile in Raleigh on Sept. 30, 1970.

“We developed the 2021 schedule with one primary goal: Continue to take steps to create the most dynamic schedule possible for our fans,” said Steve O’Donnell, NASCAR executive vice president and chief racing development officer. “Extensive collaboration between NASCAR, the race tracks, race teams and our broadcast partners allowed NASCAR to create what promises to be an exciting 2021 schedule of races.”

NASCAR president Steve Phelps had indicated in a Sept. 1 roundtable with reporters that the 2021 schedule could be released in segments as coronavirus safeguards continue to alter normal race-weekend operations. In a manner of speaking, it was, with tracks and other officials staggering their announcements throughout the day before the full 36-race release later Wednesday afternoon.

Phelps said Sept. 1 that he was “cautiously optimistic that many of the objectives that we would have had in a pre-COVID world, we will have during our 2021 season.” The 2021 slate was scheduled for a springtime release this year, but the more immediate efforts by competition and racing operations officials to salvage the 36-race schedule for 2020 have taken priority.

For the fourth consecutive year, Las Vegas Motor Speedway is set to host two NASCAR Cup Series events in 2021.  The speedway’s annual spring date, the Pennzoil 400 Presented by Jiffy Lube, returns to its traditional first-week-of-March date and will be run on March 7, 2021. Earlier this year, the race date fell in late February. The 2021 fall South Point 400 again will kick off the second round of NASCAR’s playoffs, on September 26.

NASCAR announced the complete 36-race schedule today with several notable changes, including new events at Circuit of the Americas in Austin, Texas, a race at Road America in Wisconsin and a race at Nashville Superspeedway. A dirt race on the high banks of Bristol also was among the slated changes.

“We’re extremely happy to have our spring date moved back into March,” said LVMS President Chris Powell. “It’s better for our fans, partners and everyone involved with our event to have a little separation from the Daytona 500. We feel as though we have the perfect dates for both of our NASCAR Cup Series events.”

The 2020 race was the first after the season-opening Daytona race, but the 2021 event will be the fourth race of the season and the second in the three-race western swing by NASCAR.  The fall South Point 400 has proven to be a pivotal race in the playoff battle since its inception, and the late-September start provides for an excellent fan experience for spectators.

Companion events including Xfinity and NASCAR Truck Series events will be announced at a later date. Race times for both the Pennzoil 400 and South Point 400 will be determined later this year.  Annual and individual weekend tickets are available on our website, www.lvms.com, or by calling our ticket office at (800) 644-4444

“You know, I asked my uncle once how I’d know when it was time to stop. You know what he said? ‘The youngsters tell you.’” That quote came from the fictional character, Cal Weathers, in Cars 3, the 2017 Pixar movie that despite featuring talking cars, seemed incredibly real.

After all, rare is it when a racecar driver gets to go out on his own. More often than not, the grizzled veteran who seemingly not long ago was the sport’s upstart, is suddenly looking over his shoulder at another 20-something hotshot ready to take his place. These veterans typically fall into two groups – those who are caught off guard and those who hear the music playing and engineer a plan to leave. It’s atypical for a driver to say, “G’Night” on his own timetable and on his own accord.

Brendan Gaughan is that atypical person. I’ve written about this guy so much you would think he’s the only racer I care about. Well, you may just be right. I have known this guy since his father, Michael, entered the Mint 400 off-road race in the late ‘60s. Then during the mid ‘80s this little kid began showing up riding on Michaels lap as the race cars paraded out to the staging area for the annual Mint 400, who wanted to grow up and be a racer. Well, gang, he has and is a “racer” and will always be a “racer.”

The 45-year-old from Las Vegas has been racing in NASCAR since 1997, and before wheeling stock cars around asphalt ovals, he was navigating the silt and sand of off-road racing. He is the grizzled veteran who has been racing all his life, but when the checkered flag falls on the YellaWood 500 NASCAR Cup Series race Sunday at Talladega Superspeedway, Gaughan will close the chapter on his NASCAR career and enjoy life as a husband, father, and part-time off-road racer. Gaughan is the lucky racecar driver going out on his terms.

But Gaughan considered himself lucky long before he embarked on a final, five-race NASCAR Cup Series campaign in 2020 that began with an impressive seventh-place finish in the season-opening Daytona 500. Luck found Gaughan in 2018 when he joined Beard Motorsports, the modern-day David competing against the Goliaths of the NASCAR Cup Series.

Owned by Mark Beard Sr., president of Beard Motorsports and various family businesses, Beard Motorsports has proven to be the little team that could, forming a strategic partnership with Richard Childress Racing (RCR) and focusing on Daytona (Fla.) International Speedway and its sister track 500 miles north in Talladega, Alabama. With cars constructed by RCR and powered by ECR engines, Beard Motorsports has scored four top-10 finishes, the most recent of which came Aug. 29 at Daytona when Gaughan finished eighth in the Coke Zero Sugar 400.

With one fulltime employee and only two racecars in its entire stable, Beard Motorsports unabashedly slings stones and, more often than not,  connects, providing great satisfaction to the family-operated team.  Of Gaughan’s 66 career NASCAR Cup Series starts, 16 have been with Beard Motorsports. He has scored four top-10 finishes with the team, representing half of his career top-10s. Gaughan’s other four top-10s came during his rookie season in 2004 with Team Penske.

“The Beards are people who appreciate this sport, and love just being able to make these races,” Gaughan said. “I remind them all the time that they’re beating Roger Penske, they’re beating Joe Gibbs, they’re beating Rick Hendrick. They’re such great people and their family is awesome – their son Mark and their daughter Amie are such a big part of it – and I enjoy being with these people and seeing what we accomplish as a David versus the Goliaths.”

The feeling between Gaughan and the Beard family is mutual. Together, they carried the fun factor that powered each of them to go racing in the first place to the elite NASCAR Cup Series, where the pressure to perform can make fun fleeting.

The gregarious Gaughan and the hard-working Beards have enjoyed the fruits of their labor, and they have one more go-round to savor their racing utopia. The YellaWood 500 at Talladega marks the culmination of their work together, and as strongly as they believe in each other, they believe that they can win. It would be a send-off for the ages and it’s completely plausible as Brendan is #NotGaughanYet. The YellaWood 500 starts at 2 p.m. EDT on Sunday with live coverage provided by NBC and SiriusXM NASCAR Radio. 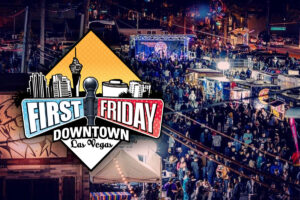 Last but not least is the monthly First Friday event which has been heavily hit during this covid-19 time.  First Friday Foundation, a 501(c)3 non-profit organization, announces that First Friday is a virtual event again on October 2nd as we continue to stay connected while practicing social distancing during the COVID-19 pandemic. We will go live from various places in the arts district and celebrate First Friday’s 18th Anniversary in a virtual way.

Please check Instagram TV for pre-recorded messages and activities from our community throughout the night. Visit our website and learn more about the programs that support artists and our community, as well as how you can participate and donate. Donations can be made at https://www.ffflv.org/.

Key elements for this month include: Timing – From 6pm to 9pm; Link to Virtual First Friday – @firstfridaylv; First Friday will be visiting the special Mindfulness and Healing event for our front line workers (pre-registered event, not open to the public – however, featured on Virtual First Friday). Art and creativity will be the focus, helping rejuvenate our special audience. And other events as outlined on the First Friday Foundation posts updates and special offers through its social media channels – on Facebook at www.facebook.com/firstfridaylasvegas and Twitter @FirstFridayLV. The First Friday website is www.ffflv.org where donations to this non-profit are gratefully accepted.