The Power of Love® gala is a critical platform for fundraising and generates the majority of annual revenue needed to provide service, care and resources for patients and their caregivers in the fight against neurocognitive diseases including Alzheimer’s, Parkinson’s, Huntington’s, multiple system atrophy, frontotemporal dementia and related disorders, multiple sclerosis and more.

“Brain disease does not belong to the patients alone, but their entire families. A caregiver’s job is 24/7, 365 days a year,” said Camille Ruvo, Keep Memory Alive vice-chairwoman. “We are honored to welcome these incredible artists to the lineup for this year’s Power of Love® gala, which allows us to fund the remarkable work being done at Cleveland Clinic Lou Ruvo Center for Brain Health.”

In addition to celebrating the iconic music of Richie, the evening will honor Lonnie Ali, wife, and caregiver of the late Muhammad Ali, with the Keep Memory Alive Caregiver Hero Award. The award pays tribute to those who have gone above and beyond to care for those who are unable to care for themselves and Ali’s grace and selflessness make her a true caregiving hero.  Longtime Keep Memory Alive supporter and celebrity chef Wolfgang Puck will be joined by James Beard Foundation seven-time award-winner Daniel Humm of Eleven Madison Park, The NoMad (in New York, Los Angeles, and the recently opened Las Vegas outpost) and Davies and Brook, his forthcoming restaurant at Claridge’s in London, to prepare culinary creations for the evening. Guests will dine, drink, and donate with an exceptional silent auction, crafted cocktails, exquisite fare, and top entertainment.

“Without the success of the Power of Love® gala, Cleveland Clinic Lou Ruvo Center for Brain Health would not be able to provide this level of care for patients and their families,” said Larry Ruvo, founder, and chairman of Keep Memory Alive. “From valuable support resources to research, medical education and much, much more, it is Keep Memory Alive’s commitment to continue our mission to find a cure tomorrow, while preserving memories today.”

Multi-GRAMMY Award-winning superstar Bruno Mars will return to Park Theater at Park MGM in Las Vegas for 11 new performance dates in 2019, beginning with Monday, April 29, with date running through to Saturday, Sept. 14. Tickets for the shows start at $87.61, not including applicable service charges, are on sale to the general public and can be purchased online at ticketmaster.com.

Bruno Mars is an 11x GRAMMY Award-winner and 27-time GRAMMY Award-nominee. Mars is a celebrated singer, songwriter, producer, and musician who has sold more than 180 million singles worldwide, making him one of the best-selling artists of all time. Recently, Bruno’s critically acclaimed RIAA certified triple-platinum album 24K Magic album swept the 2018 GRAMMY Awards taking the most coveted trophies for Album of the Year, Song of the Year, and Record of the Year. The album marked his highest first week sales debut, remaining in the Top 10 on the Billboard 200 for an impressive 44 consecutive weeks. The lead hit single “24K Magic” is certified four-times Platinum by the RIAA. Mars’ six-time platinum certified single “That’s What I Like” climbed to No. 1 on the Billboard Hot 100, marking his seventh Hot 100 chart-topper and his first No. 1 on the Hot R&B Songs chart, where it remained at the top-spot for 19 consecutive weeks.

Mars is the first artist to have two songs spend 24 or more weeks in the Hot 100’s Top 5 (“That’s What I Like” and “Uptown Funk”). He is the only artist in the past year to have both a four-time and six-time platinum single from the same album. Also, Mars is one of the few artists to have written and produced all of his No. 1 hits and has had a No. 1 song on the Hot 100 from each of his first three studio albums.

With seven Hot 100 No. 1s, Mars is ranked No. 1 among male artists with the most Hot 100 No. 1s for this decade, extending his lead over Justin Bieber, Drake, Eminem, and The Weeknd. Mars has been traveling the globe on his massive 24K Magic World Tour, which sold more than 1 million tickets in a single day. In 2015, Mars dominated music charts with the hit single “Uptown Funk,” which took home three GRAMMY Awards, including Record of the Year. Mars’ first solo single, “Just The Way You Are” recently achieved RIAA Diamond certification. 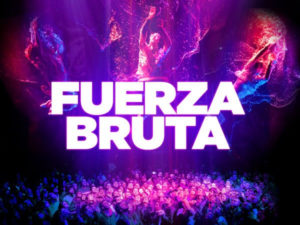 If you have been on the Las Vegas Strip lately, you may have seen a huge tent in front of the Excalibur Hotel & Casino, and you wondered what was going on – here is your answer! International sensation FUERZA BRUTA is raising more than just the bar for Las Vegas entertainment. Recently the dynamic and immersive theatrical production erected the 3,800-square-foot tent, in which it will perform beginning in March. Executives and team members from Excalibur Hotel & Casino, including Ann Hoff, President and COO of Excalibur, were on hand to hoist the final beams and unveil the production’s new location on Las Vegas Boulevard, where it will perform a limited engagement beginning Thursday, March 7.

Launched in Buenos Aires in 2003 by Creator and Artistic Director Diqui James and Musical Director and Composer Gaby Kerpel, Fuerza Bruta quickly took the world by storm, performing for more than six million spectators in more than 34 countries and 58 cities since its inception. Fuerza Bruta is co-produced by Ozono Producciones – Fuerza Bruta & EMM Williams Productions.

With incredible visual effects, the show breaks free of the confines of spoken language and theatrical convention to transport audiences to a parallel reality where emotion takes control. At every show guests are ushered onto the main stage, where they are surrounded in a 360-degree spectacle with performers demonstrating spectacular feats just inches away. From gorgeous women twisting ethereally in a Lucite pool above the audience to performers suspended in mid-air surrounded by a vast sea of Mylar, creative genius James’ original scenes and customized staging will deliver a wow to all who take it in.

Fuerza Bruta will perform at 7:00 p.m. and 9:30 p.m., Wednesdays through Sundays (dark Mondays and Tuesdays), at Excalibur. Tickets start at $72.50 (excluding fees) and are now on sale. A limited number of VIP packages are also available, starting at $115 (excluding fees), and include a special VIP lanyard, early entry, concessions, a special gift, and priority location. Tickets can be purchased at any MGM Resorts International box office, online at Excalibur.com or by calling (702) 597-7600. For groups of 10 or more, please call (866) 633-0195 or email [email protected]. For more information about visit FuerzaBrutaGlobal.com.

The Howard Hughes Corporation, developer of the Summerlin master planned community, the Las Vegas Ballpark, and owner of the Las Vegas Aviators®, the city’s professional Triple-A baseball team of the Pacific Coast League and affiliate of the Oakland Athletics, announced today a partnership with Daktronics (NASDAQ-DAKT) of Brookings, South Dakota. Daktronics has designed, manufactured, and recently installed a new one-of-a-kind LED video display at the Las Vegas Ballpark, featuring a unique angle to match the contour of the outfield wall.

At 3,930 square feet, the new outfield display is the largest Daktronics has installed in baseball’s minor leagues and is top 25 in size for baseball in North America. It features a 13HD pixel layout and measures approximately 31 feet high by 126 feet wide. The stadium’s construction team – a joint venture of AECOM Hunt and PENTA Building Group – installed the new display in late 2018. The display is capable of variable content zoning, allowing it to show one large image or be divided into multiple zones to show any combination of dynamic content. From live video and instant replays to statistics and animations, the display will keep fans entertained at every event.

“Pairing the largest Daktronics LED video display in the minor leagues with the new Las Vegas Ballpark will blow fans away,” said Rusty Lenners, Daktronics sales representative. “We’re grateful to be working with The Howard Hughes Corporation, the Las Vegas Aviators and AECOM Hunt-Penta on this first-class project.  This partnership has resulted in an installation that will excite and engage fans for years to come.”

According to Don Logan, president and chief operations officer of the Las Vegas Aviators, the new display is an exciting addition to Las Vegas Ballpark, poised to be one of the country’s premier minor league stadiums. “Although the team has been in Las Vegas for 37 years, this upcoming season is the start of a new chapter for the Aviators, with a new name, a new stadium, and a new affiliation,” said Logan. “It doesn’t get better than that.”

Well, gang, just two more weeks and the Boy’s of Thunder will be at the Speedway.