“Puppet Up!” – Uncensored, which is set to debut in its new home inside The Sands Showroom at The Venetian® Las Vegas on July 21, has just unveiled its lineup of expert puppeteers ready to bring their irreverent and unpredictable style of comedy to the Las Vegas Strip.

The revolving cast of six world-class puppeteers, all hand selected by Brian Henson, are tasked with bringing to life more than 60 unruly puppets nightly, playing outrageous scripted scenes and laugh-out-loud Improv. Coming from a wide variety of backgrounds including legendary theatres and schools such as The Groundlings, these puppeteers are not only experts in the art of comedy but have also mastered the one-of-kind technique and creativity that is a Henson trademark.

“Our cast is six hilarious Improv comedians who are also wildly skilled Henson puppeteers. A rare combination of talents,” Patrick Bristow, host and director of “Puppet Up! – Uncensored,” said. I love that I get to go out there every night and watch them amaze and delight the audience. Half of my job is to just shape their delicious insanity into a great show. The other half of my job is basically getting to enjoy them just like the audience.”

The first set of puppeteers to grace the Las Vegas stage include: Grant Baciocco who joined The Jim Henson Company as the creator and host of the Henson.com Podcast.  In addition to performing with Henson and “Puppet Up!” his puppet credits include work with The Muppets, Nerdist and the current incarnation of “Mystery Science Theatre 3000” where he puppeteers Crow T. Robot.

Tyler Bunch has been working as an actor/puppeteer in the New York City area for 22 years. In addition to performing such characters as Parris in “The Crucible,” Bottom in “A Midsummer Night’s Dream” and Pooh Bah in “The Mikado,” he may also be recognized by youngsters (or the young at heart) for his performances as Pop, Treelo and Doc Hogg (“Bear in the Big Blue House”),.”

Peggy Etra – has performed with “Puppet Up!” for the last seven years. She is a graduate of ACT in San Francisco and The Groundlings. Her film credits include “State of Play” and “Driving Lessons.” Her TV credits include “Seinfeld” and “Boston Legal.” She is sleeping with the musical director. It’s OK, they’re married!

Ted Michaels – The career of Ted Michaels, much like his brain, is all over the place. As a puppeteer, he’s performed in “No You Shut Up!” on Fusion Television, “The Muppets” on ABC, MTV’s “Warren the Ape,” and the 2011 GRAMMY Awards. As an improviser, Michaels is a founder of the Crazy Uncle Joe Show at The Groundlings Theater in Los Angeles, where he was a main company member. He’s also starred with Eddie Izzard in his One Word Improv. .As an actor, he most recently starred in the acclaimed web series, “The Guild.”

Michael Oosterom – Stage credits include the American Conservatory Theater, The California Shakespeare Festival, The Wilma Theater, The San Francisco Mime Troupe and the national tour of Steve Martin’s “Picasso at the Lapin Agile.” Among the many Puppetry credits are “The Muppets,” “No YOU Shut Up!”, Jim Henson’s “Creature Shop Challenge,” and the GRAMMY Awards. He is an alumnus of The Groundlings Sunday Company.

Colleen Smith is Groundlings Sunday Company alum and teaches there. Her television credits include “The Office,” “How I Met Your Mother,” “Selfie,” “Neighbors,” “King of the Hill” and “The Showbiz Show with David Spade.” Most recently she wrote, directed and starred in “The Naut” a post-apocalyptic grindhouse parody. She also works for the Jim Henson Co. as a puppeteer/improviser on “No, You Shut Up!” She has been with “Puppet Up!” for years.

For more information about “Puppet Up!” – Uncensored” please visit www.puppetup.com.

“Clint Holmes: Between the Lines” will debut in the newly redesigned Palazzo Theatre on July 16, furthering the resort’s commitment to a broad spectrum of new entertainment offerings. Holmes’ latest adaptation, which will run Tuesday through Saturday at 10 p.m., is a culmination of all the artist has gleaned throughout his impressive career. Promising a personal, melodic journey of contemporary hits and traditional standards, as well as original music written by Holmes, his objective was to create a show that “connects with the soul of the audience,” regardless of age or musical preference.

“Sometimes when we hear a song, we just concentrate on the words or the notes,” Holmes said. “But if you look closer between the lines of the music, there is deeper meaning that creates beautiful shared experiences.”

Holmes will be accompanied on stage by a seven-piece ensemble band including pianist and musical director Christian Tamburr, guitarist John Wedemeyer, saxophonist Rocco Barbato, drummer and percussionist Jakubu Griffin, bassist Dave Ostrem, keyboardist and vocalist Jamie Hosmer. Cuban-born singer and dancer Noybel Gorgoy will also be featured. She most recently was featured as the lead singer of the “gypsy” jazz band Hot Club of Las Vegas.

Growing up with an African-American jazz musician father and a British mother, who was a classically trained opera singer, Holmes has spent decades performing across the globe. He also served as the late Joan Rivers’ sidekick and announcer on “The Late Show.” Clint was also the event correspondent for “Entertainment Tonight,” and as the host of his own Emmy award-winning talk/variety show. Holmes was named “Best Male Celebrity Vocalist” in the BroadwayWorld.com New York Cabaret Awards and voted “Best Singer” by the readers of Las Vegas Review-Journal.

“The newly designed Palazzo Theatre is the perfect venue for the intimate performance that Clint Holmes is known to deliver,” said George Markantonis, president and chief operating officer of The Venetian, The Palazzo and Sands Expo.  “I’ve seen first-hand the talent that Clint brings to the stage, and I am certain our guests will be blown away by his show.”

“Arrival From Sweden: The Music of ABBA” brings the iconic pop songs of the Swedish sensations to the Suncoast Showroom July 16 and 17. ABBA first hit the U.S. and U.K. charts with their #1 1974 hit “Waterloo.” The band followed up with a string of chart-topping singles, including “Mamma Mia,” “Dancing Queen,” “Fernando,” “Take a Chance on Me,” “SOS,” and many more. The group was inducted into the Rock and Roll Hall of Fame in 2010 and has sold nearly 400 million records worldwide. 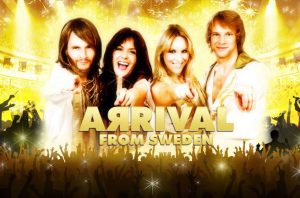 “Arrival From Sweden” was founded by Vicky Zetterberg in Gothenburg, Sweden in 1995. The band quickly became the most recognizable ABBA tribute group and has spent the last two decades performing for sold-out crowds around the world. “Arrival From Sweden” is the only ABBA tribute band that works with musicians who toured with the original members in the ‘70s, and is also the only tribute to receive an unreleased ABBA song directly from the original artists, and owns the exclusive rights to duplicate ABBA’s original outfits, which pairs well with their spot-on vocals for an unforgettable performance. Showtime is 7:30 p.m. Tickets are available from $24 plus tax and fees. Tickets can be purchased at any Boyd Gaming Box Office, by calling 702-284-7777.

The Silverton Casino Hotel is bringing contemporary jazz-rock band, Blood, Sweat & Tears to Veil Pavilion on Saturday, July 30, 2016. The unique styles of this American jazz-rock band from New York has secured them three Grammys and 10 nominations as well as a world tour that would prove to be comparable to that of the early 80s. Current members performing include Bo Bice of American Idol fame, Dan Levine, Brad Mason, Glenn McCLelland, Dylan Elise, Leonardo Amuedo, Carl Fischer, Ric Fierabracci and Ken Gioffre. The performance at Silverton Casino starts at 8 p.m. will have fans singing along to their favorite hit songs such as, “You’ve Made Me So Very Happy”, “Spinning Wheel”, “And When I Die”,  “Sometimes in the Winter” and many more.  Tickets start at $29.00 and the concert is open to all ages.  Guests under 18 years of age must be accompanied by an adult 21 years of age or older. To purchase tickets visit the Silverton Box Office, by calling 702-263-7777.